Gray Maynard and Nate Diaz are set to compete their trilogy of fights this Saturday. BE's striking specialist Connor Ruebusch breaks down the striking skills of these two lightweight boxers, and the strategic elements of their styles.

Everybody loves a rubber match. Nate Diaz and Gray Maynard have fought twice before, and each man has picked up a single win over the other. Despite the fact that both fighters could very well be on their declines, the prospect of a fight to decide who is indeed the better man is very enticing. What makes this fight even more interesting is that both Diaz and Maynard are fighters known for their boxing. While each fighter's striking is bolstered by some very strong grappling credentials, Gray a D1 wrestler and Nate a black belt in BJJ, they spend most of their fights on the feet, and throw almost nothing but punches.

Despite 11 of his 14 finishes coming by way of submission, Diaz is more than happy to slug it out on the feet, and his ugly style is made up for by his 76 inch reach (6 inches more than his opponent) and frightening accuracy. He wears his opponents down through brutal attrition, walking foes down and beaning them with an endless stream of long, straight punches.

Maynard, on the other hand, is more of a puncher in style, though he only has two knockouts to his name. His strong wrestling affords him the advantage of a takedown threat which he uses to bait his opponents into vulnerable positions. He has power in both his left hook and right hand, as well as a nasty right uppercut which only serves to bolster his considerable takedown defense.

In essence, Diaz fights with a relatively high risk style which allows him to finish his opponents, but has put him on the wrong end of more than a few decisions. Maynard, on the other hand, tends to take his opponents the distance, but his losses (and no contests) are usually emphatic. Both Diaz and Maynard were knocked out in their most recent fights, Diaz for the first time, Maynard for the third.

With this Judo Chop, we're going to examine the strategies employed by these men, two of the more prolific boxers in the lightweight division. While MMA is still growing in terms of technical talent, there is still some great boxing going on in the Octagon, and Nate and Gray have both thrown some pretty impressive leather in their respective UFC tenures. The question is, whose boxing will prevail, and why?

Footwork is one of the most important aspects of boxing. Footwork determines one's ability to take a punch, throw a punch, avoid a punch-the focus on boxing is all on the hands, but it's really all about the feet. Footwork is also one of the biggest differences between the styles of Nate and Gray.

Nate, like his brother Nick, does not have great footwork. He compromises his own positioning on a frequent basis when moving in any direction, simply walking rather than hop-stepping and keeping a solid base. The biggest weakness of Diaz's footwork is that it actually inhibits his offense. As a fighter who thrives through pressure and attrition, Nate needs to stick to his opponents and keep them in front of him and on the end of his punches, but more and more frequently, as the game planning and striking skill of MMA fighters have improved, his footwork has not allowed him to do so. Let's take a look.

1. Diaz squares off against Josh Thomson.

2. Thomson, as he has done all fight, moves in a wide circle. Nate stays in front of him, more or less, though you can see him crossing his feet as he does so.

3. Frustrated with the movement, Diaz decides to attack. He throws a rare teep...

4. ...and loads up a left hand. Even while the punch is yet to be thrown, Thomson has moved farther to Nate's left (note his position in relation to the UFC logo on the canvas).

5. Nate throws the left, and Thomson easily avoids it.

6. Thomson pivots as Nate lunges past him and smacks him in the back of the head with a quasi-legal right hand.

On the offensive, Diaz almost requires his opponent to stand in front of him to hit them. For this reason, much of his success is the result of conditioning and the frustration of the opponent. After a round of being chased and hounded by wide, slapping punches and taunts, many opponents wilt under pressure and allow themselves to fall directly into the Diaz game. In addition, Nate is very difficult to put away and, like his brother, never seems to tire. Without these traits, his footwork would never put him in position to hurt a clever opponent. As with so many fighters, his flaws are a direct result of his attributes.

Maynard is a far better boxer when it comes to footwork. Though he too has a worrying tendency to cross his feet when circling, he has shown an ability to attack on diagonal lines, punishing opponents for circling rather than merely waiting for them to stop. 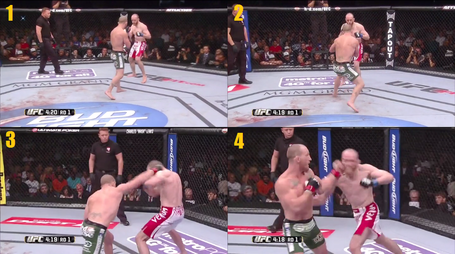 1. TJ Grant circles to Gray Maynard's left. Gray stays in front of him (crossing his feet!).

2. Maynard takes a hard step forward and to his left, simultaneously cutting off Grant's circling and closing the gap.

3. He lunges forward and cracks Grant with a right hand on the cheek...

4. ...and a solid left hook to the chin when Grant tries to counter with an uppercut.

Maynard clearly has the better offensive footwork. Being able to move forward and to the side simultaneously is a crucial aspect of fighting, and the lack thereof is a death knell for an aggressive fighter.

Now it's Nate's turn to shine. First, let's see why Maynard falls flat in this category.

It's not that Gray Maynard can't throw combinations of punches. He does so in nearly every fight, and nearly always finds success. Above, against TJ Grant, you see him landing a decent shot only to follow up with an even better one. This is the goal of throwing combinations: whether or not all of the punches land, each attempted punch increases the likelihood of the others to land. A combination can convince a counter puncher not to throw, or knock a defensive fighter out.

Maynard's problem is almost always that he finds success with a combination, and then immediately resorts to throwing nothing but the final, most effective punch in that combination alone, and without set-up. His fights are like a microcosm of every great puncher's career. Each time something solid will land as the result of a combination, and then Gray will seize on the "effective" punch without understanding what made it effective.

1. Gray steps into a beautiful uppercut that catches Frankie Edgar right on the button. Frankie goes into survival mode for the rest of the round.

2. Twenty seconds later, after failing to put Edgar away in the initial flurry, Gray is back to stalking. He throws a lead uppercut from range.

3. And another lead uppercut.

4. And another. Keep in mind that the rear uppercut is just about the worst punch to throw without a set-up.

Of these five follow-up punches, only one landed, and it was a glancing blow. The rear uppercut is nearly impossible to land as a lead on a living, breathing opponent. It is easy to see coming, and it leaves the attacker open (Gray also walked into two hard, clean punches after hurting Frankie, all while hunting for that one knockout blow).

Now the initial shot of this sequence did not land as the result of a combination, but it was very well set up. Gray had stepped across and thrown a soft right hand mere moments before frame 1 took place. Frankie evaded this punch by changing levels and stepping to his left. Taking the same step, Maynard adjusted the soft right into an uppercut, and Frankie dropped right into it and was badly hurt. But rather than using footwork, feints, or lighter punches to make that uppercut work for him again, Maynard threw almost nothing but uppercuts for the rest of the round. Even when his other strikes were effective, he kept going back to that right uppercut.

Nate is pretty well known for being a potent combination puncher. Though rarely straying into four-punch territory, he slings out simple combinations with excellent accuracy, not overcommitting to any of the punches, nor failing to set his shots up after finding success.

1. Diaz lands a jab to the stunned face of Donald Cerrone.

2. Follows it up with a hard left straight to the chin.

3. He finishes his classic combo with a right hook that is blocked.

4. Nate's ombination finished, Cerrone begins to reset, only for Nate to jab him again.

5. He once again follows up with the left hand.

6. And this time the right hook lands solidly, looping over his shoulder and crashing into his jaw.

Not only was this sequence the story of the entire Cerrone fight, it's the story of most Nate Diaz wins. It also proves the efficacy of combination punching. Nate lands nearly every shot here, and those shots that don't land only serve to set up the others. When Cerrone blocks the first right hook in frame 3, he senses that the combination is over, and feels that it is his turn to attack. But when he sets his feet to throw, another jab is already on its way, and he only has time to defend (something he is not very good at) while Diaz lands the next three punches cleanly on his chin.

Both Nate Diaz and Gray Maynard are skilled boxers. Diaz has an unorthodox style, but typically applies it very well. Maynard throws very clean, technical punches, but falters due to his lack of tactical application. This weekend's main event will go to show whose hands are better once and for all, and my hope is that we're in for at least two or three rounds of boxing goodness. Enjoy the fights!