Tatsuya Kawajiri spoke to BloodyElbow.com about a myriad of topics, including his plans of unleashing a new special move at UFC Fight Night 34: Singapore.

Share All sharing options for: Tatsuya Kawajiri plans to unleash 'Kawa-Chan Hold' on his way to a future UFC title shot

After 41 fights and over 13 years of fighting, the Crusher will finally make it to the Octagon. It's been a long road for Tatsuya Kawajiri, who has been a staple on the top of the Japanese MMA world. On Saturday he makes that long overdue UFC debut, and he promises to impress against Sean Soriano.

"I'd like to tell the fans that thank you for waiting for me to come here (to the UFC)," Kawajiri said in an interview with BloodyElbow.com from Singapore, "I'm ready to show what I can do at the world's best stage."

He has competed in major NYE events in Japan for six times during his career, and while this Singapore event happens a few days later on 2014's first weekend, Kawajiri says this UFC debut made him relive that holiday grind he has grown accustomed to.

"In a sense, it kinda feels like the NYE tradition. It's a big event near new year's, so it's the same kind of thing for me," he said, "There's only one hour time difference from Japan, and I've been in Singapore and fought here before, so I know what the environment is like and I'm in a really good condition."

New Year's Eve in Japan hasn't exactly been the same as of late though. What once was entertaining cards stacked with the best of the best, has now been relegated to mostly just mismatches and freakshow bouts. Although he's focused on his career, the current state of JMMA still lingers on the back of his mind.

"It's quite unfortunate, in terms of what it is now in Japanese MMA," Kawajiri states, "There's not much I can do, and I can't cry about it, but what I can do as a UFC fighter is to produce good results and promote MMA so it could hopefully gain back popularity in Japan."

While the interest in the sport isn't where it used to be, the talent is still there, and Kawajiri had a few guys in mind that he feels can soon be breakthrough stars internationally.

"He's not a successor of myself, however, there's a young good looking fighter called Kyoji Horiguchi, who just fought in the UFC," he continued, "There are a lot of good Japanese fighters. Michinori Tanaka's good, Yuta 'Uruka' Sasaki also, and Satoshi Ishii." 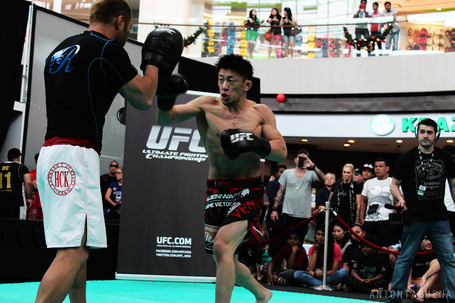 With his earlier fear of flying, many wondered if Kawajiri would end up like some of his compatriots who hasn't produced the same results after being brought out of that comfort zone by traveling and competing in America. Even though he only has fought once outside Asia, Tatsuya immediately retorted that he's actually excited for future UFC bouts as he's found away to stop worrying too much about the little nuisances of flying such as jet lag or that turbulence he once feared.

"I realized that when the plane crashes, everybody dies anyway, so I'm not scared of catching flights anymore," Kawajiri stated with a slight laugh, "I actually want to be a fighter who would be fighting on the main card of a PPV show in America, so that's what I'm looking for."

Another factor that some Japanese fighters mention from UFC debuts are the difference between rings and cages, while Kawajiri has competed in a cage couple of times already, he was still a bit coy when asked about preparing for a fight in that surface.

"I'm preparing to not care about things like that at all," he states, "I'm just going to go with the flow and deal with what happens in there."

Apart from conquering his phobia with flying, Kawajiri states that he's grown in many ways through the years, and he credits his past failures for these improvements.

"I learned a lot from the mistakes I made on those losing battles. Like for example, against Alvarez, I got knocked out. That made me realize that 'oh, I could get knocked out', because until then I thought I would never get hurt from punches," he says, "So from that point on, I started to change a little bit of my fight style."

"Honestly, I wish the best of luck to Josh Thompson. He's like my "war" friend," Kawjiri said as he talked about past opponents, "He inspires me that he was offered a title shot, and I'm proud of the fact that I also beat him," Kawajiri excliamed, "I don't have anything bad to say, and now it also makes me feel that maybe I can also go for lightweight too."

For now though, he's focused on featherweight, a division he has gone 4-0 on and claims to have gotten the weight cut down to a science. He states that the drop is now "no problem at all", and plans to tear up the UFC division starting this Saturday.

"I want to fight minimum three fights a year, but I prefer to fight 4 times this year," Kawajiri says of his short term goals, while maintaining that he's not looking past his first test in Soriano, "I'd like to challenge the featherweight champion as soon as possible."

"What I am going to have to do against a guy like that, is to just keep attacking and attacking, and I won't give him time to attack me," as he talked about how he matches up against the current featherweight champion, "That's the way I have to fight Aldo."

Before anything though, his immediate goal is to stop undefeated prospect, Sean Soriano. A fight where he plans to showcase some new tricks he has up his sleeve.

"I will hit him with a punch, take him down, pass his guard, and then I'll finish him with my special hold called, Kawa-Chan Hold."

What does that new move entail? Well Kawajiri says we will have to wait and see on Saturday.