UFC contender Alexander Gustafsson updated the tattoos on his arm with representations of his last two bouts against Jon Jones and Jimi Manuwa.

Share All sharing options for: Photo of the Day: Alexander Gustafsson's tattoo updated with Jon Jones and Jimi Manuwa fights

For those who didn't know, Alexander Gustafsson literally wears his MMA record on his sleeve. He has tattoos for every single bout he had in his professional career, with shaded triangles to represent his wins, and just a hollow outline to represent his first loss against Phil Davis.

As the UFC light heavyweight contender showed on Facebook, he has recently updated these tattoos, and added representations of his last two bouts against Jon Jones and Jimi Manuwa respectively. Check out the shape for his close bout against Jones: 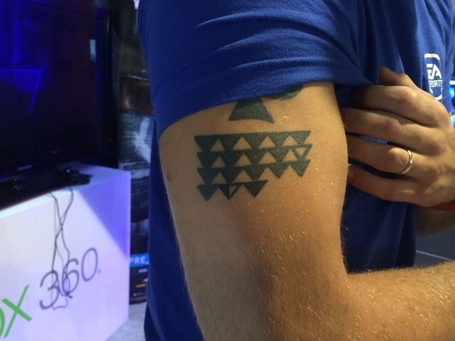 "Ok, finally done with the updates on my tattoos. The Jon "Bones" Jones fight and the Jimi Manuwa are filled in. In my eyes, I won the fight again Jon Jones, but not in the judges eyes, so I filled it just half colored. The next tattoo I will do will be filled in fully when I get the belt, this time I will not leave it in the hand of the judges."

After lengthy negotiations and even some 'unprofessional bully tactics' as Jones called it, the duo are finally set for a highly anticipated rematch at UFC 178 this September. How do you think Gustafsson's next tattoo will look like?