The UFC featherweight title holder seems to disapprove of his fellow champion's actions during the UFC 172 main event against Brazilian Glover Teixeira.

During UFC 172, UFC Featherweight champ Jose Aldo retweeted  a post from a fan blaming Jon Jones for the use of dirty techniques. The tweet says: "Jones is an exceptional fighter but he plays dirty, headbutts, open hands on his opponent's face, very dangerous." The message from Gilmar Caetano was directed to Pedro Rizzo, who also retweeted it. Both Aldo and Rizzo are friends of Glover Teixeira, the challenger beaten by the UFC light heavyweight champion Jones last Saturday. 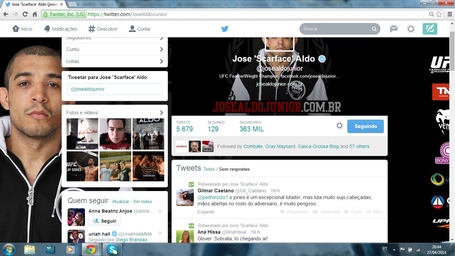 During the bout, Jones was warned by referee Dan Miragliotta for eyepoking but no points were taken despite Jones continuing the behavior. Many Brazilian fans have also complained in the past about Jones conduct against popular fighters like Mauricio "Shogun" Rua and Quinton "Rampage" Jackson including kicks to the knees and headbutts.

Despite talk of a super fight with LW champ Anthony Pettis, Aldo currently has not got his next challenge lined up. He may face the winner of a Frankie Edgar vs. B.J. Penn bout after those two finish coaching The Ultimate Fighter.