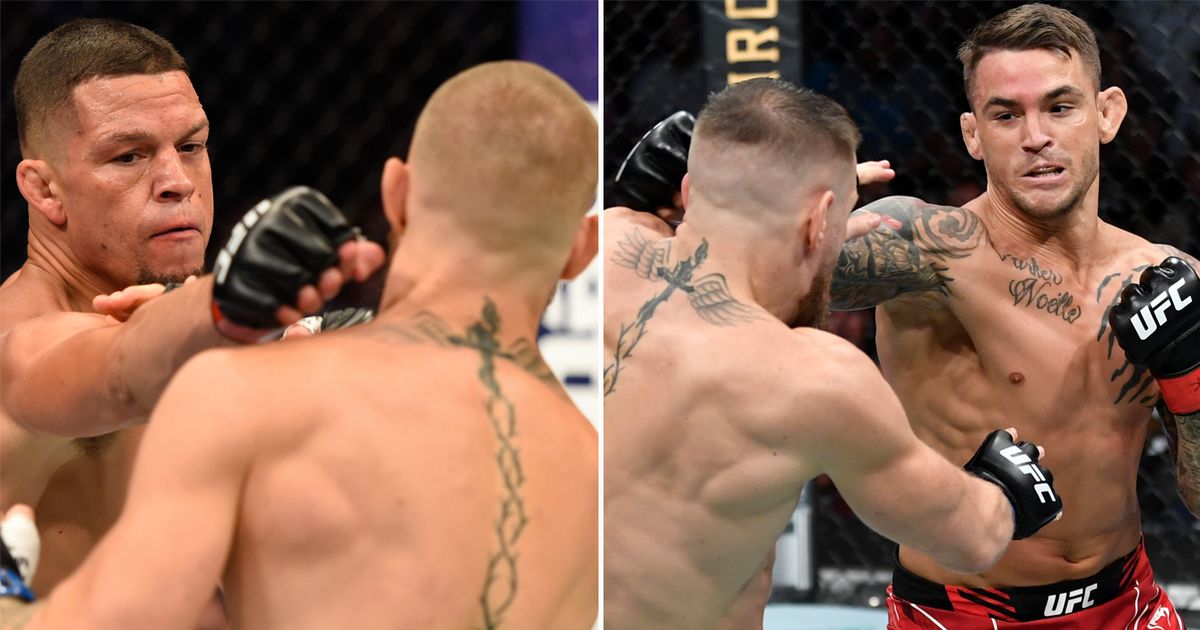 Conor McGregor is undeniably the biggest MMA superstar of all time, and for good reason. Not only did the Irishman's larger than life personality help usher in a new generation of fans and permanently alter the UFC landscape as we know it, but it also provided the MMA world with some of the most heated rivalries in the history of the sport.

At his peak, McGregor's ability to be utterly venomous on the mic to create animosity between him and his opponents was second to none. This remarkable quality is exactly why 'The Notorious' has headlined the vast majority of the UFC's highest selling pay-per-views ever, not to mention his knack for putting on spectacular performances on the biggest of stages.

Having recently fallen on hard times, the immediate future of MMA's grandest superstar remains uncertain. While we await news regarding what might be next for McGregor, let's take a look back at his four biggest rivals and rank them from worst to best in terms of how memorable and significant they were to his career and overall legacy.

The King of Rio himself, Jose Aldo, was the first person to experience the verbal wrath of McGregor on such a brutal level. Not only was Aldo on the receiving end of a verbal onslaught during McGregor's run through the featherweight division, but once he secured a title shot, the UFC booked a whole world tour with the two in order to maximize the hype. This tour gave McGregor the type of exposure in which he had never received before, and he used every second of it to trash talk the Brazilian and dominate the mental warfare. Especially once you consider the language barrier, Aldo never stood a chance in the trash talk department given his inability to speak fluent English. The entire build toward their eventual fight at UFC 194 was a one-sided verbal beatdown for McGregor, and this inevitably impacted Aldo's performance on fight night. Seriously, who can forget the time McGregor stole Aldo's belt? Or the time he literally ripped up a picture of Aldo at a bar in Rio before eating it? This contributed heavily to his superstardom.

The two only ever got to share the octagon once, and it turned out to be extremely short-lived when McGregor delivered the fastest finish ever seen in a UFC title fight by knocking out a visibly agitated Aldo in just 13 seconds. Considering the amount of hype, this fight definitely deserved to go longer and Aldo probably should have gotten an immediate rematch. However, McGregor only needed 13 seconds and a perfectly timed left hand to end his biggest rivalry at the time. This performance solidified McGregor as the real deal and catapulted his brand to unprecedented heights.

Dustin Poirier has met McGregor inside the octagon more times than anyone else on this list, yet that doesn't necessarily mean they had the most heated rivalry. Their first meeting came at UFC 178 during McGregor's initial run at 145lbs, when the Irishman knocked out Poirier in the first round. Their second meeting came several years later and served as the main event of UFC 257, which saw Poirier exact his revenge over McGregor with a second round knockout of his own. Having exchanged knockouts, a trilogy bout was booked for UFC 264 to finally give the storied rivalry some closure. After an electric first round that saw both fighters have their moments, the bout ended under unfortunate circumstances when 'The Notorious' suffered a gruesome leg break that rendered him unable to continue. As a result, Poirier was declared the winner via TKO, making the score of their rivalry 2-1 for the Lafayette native.

This is surely the strangest rivalry of McGregor's career. Their first fight saw McGregor get under Poirier's skin and involved plenty of trash talk, their second fight saw the two share plenty of mutual respect while maintaining friendly attitudes, and then their trilogy fight was the most heated and hateful of the three. It was definitely odd seeing the two switch from hateful to friendly multiple times, but altogether the rivalry was more heated than not. Despite having lost two in a row to Poirier, the controversial ending to their trilogy certainly leaves the door open for a fourth fight down the road. McGregor declared it himself in the post-fight interview, "this is not over". This might very well be the case.

The rivalry with Khabib Nurmagomedov is by far the darkest and most personal rivalry of McGregor's career. The trash talk reached very disturbing levels and the metaphorical line was crossed on several occasions, which made the rivalry so much deeper than what we are used to seeing. Things like the pre-fight pressers, the bus incident, and slurs regarding religion/family turned this into so much more than your average fight. The animosity and hatred these two shared made this the biggest fight in UFC history, generating a record-setting 2.4 million pay-per-view buys. Once the fight concluded, Khabib jumped the fence to attack McGregor's corner which resulted in the infamous post-fight brawl inside and outside the octagon. It was absolute mayhem and the only time something of this nature has occurred under the UFC banner. Given all that happened before and after the fight, a rematch between the two likely would have been even bigger, shattering the pay-per-view record they previously set at UFC 229.

The fight itself was not particularly close, but it was competitive at certain times. After clearly winning the first two rounds, Khabib took his foot off the gas in the third which allowed McGregor to gain some ground. All three judges scored the third round for McGregor, the only time Khabib cleanly lost a round in his 29-fight career. Khabib ultimately scored a submission in the fourth round, stopping McGregor in his tracks. With Khabib now retired, it is safe to say we won't see these two share the octagon ever again, yet it feels like their personal rivalry will be ongoing until the end of time.

Coming in at the #1 spot is greatest and most memorable rivalry of McGregor's career. In many ways, the rivalry with Nate Diaz helped define McGregor's career and pushed him unlike anyone or anything that had come before. Both men accepted their first bout at UFC 196 on short-notice, not to mention the fight was contested at welterweight. Diaz shocked the world in one of the most iconic performances we've ever seen when he submitted a seemingly unstoppable McGregor in the second round. After quickly swallowing his defeat, McGregor became obsessed with the rematch and would not accept any other fight until the UFC gave him a chance to right his wrong. The rematch eventually took place at UFC 202, and both fighters fed off of each other to put on an instant classic that evening in Las Vegas. After a gruelling five round contest that included knockdowns, shifts in momentum, and plenty of blood, McGregor was awarded a majority decision victory, avenging his lone UFC loss at the time. Together, both fights produced some of the most memorable moments in UFC history, and it seems as though neither man will be able to happily call it a career until a trilogy takes place. If a score ever needed to be settled, it's this one.

Memorable pair of fights aside, it feels like these two were born to be rivals. Their press conferences never failed to entertain, their trash talk never got old, and the fans never got sick of watching them do battle. They quite literally still trade verbal jabs on twitter to this day. While these two will never get along, we have previously seen them demonstrate mutual respect, namely inside the octagon after each fight. Both men possess personalities bigger than the sport itself, which is why they are able to create magic anytime they interact. Nate Diaz is Conor McGregor's biggest rival, and the prospect of a third fight between the two is enough to get any MMA fan excited. Let's just hope nobody gets pegged with a can of monster at the press conference.

How would you rank McGregor's biggest rivals? Let me know in the comments below!