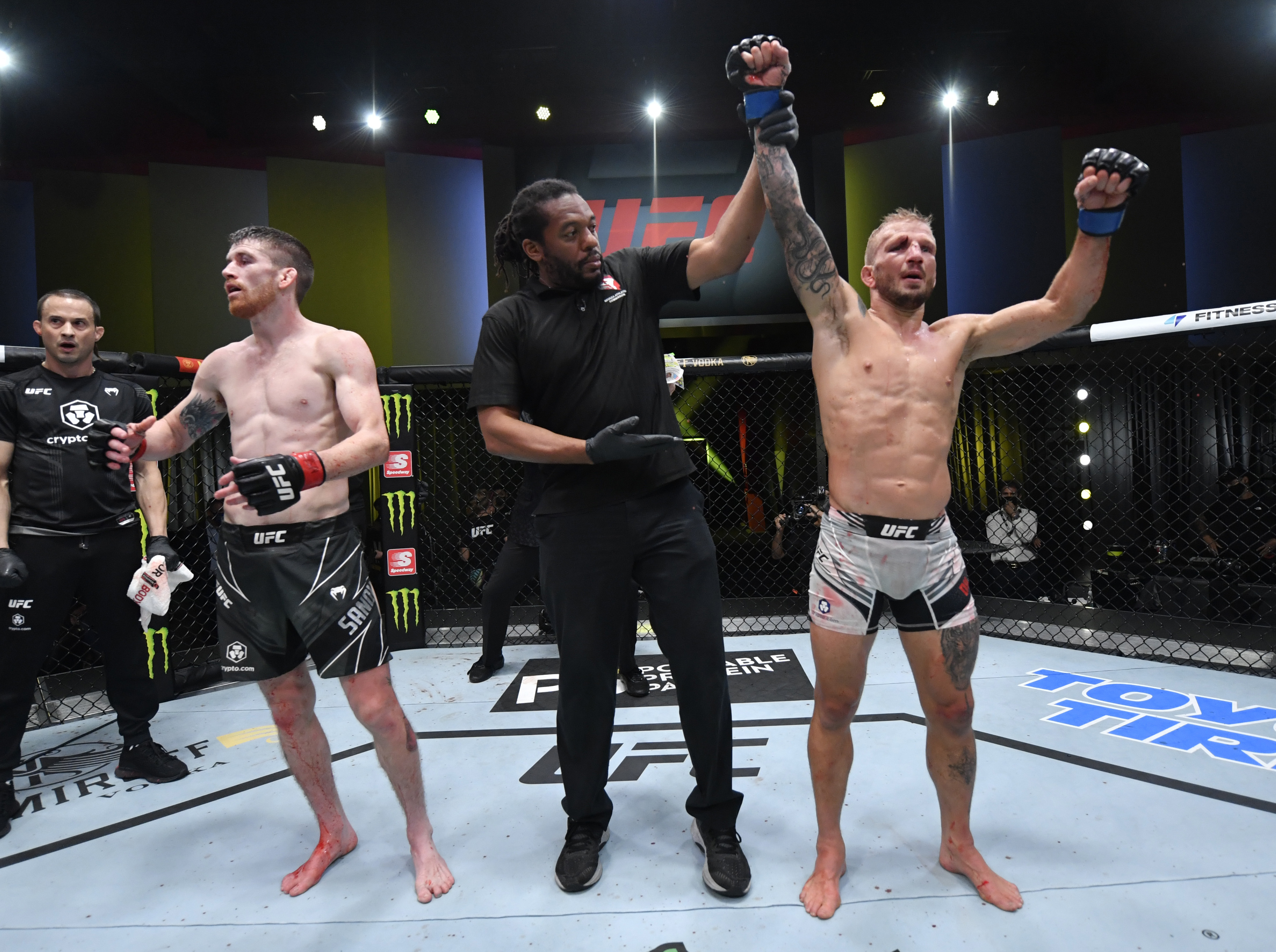 Judging in combat sports, particularly MMA, has been scrutinized for as long as we can remember for being incorrect, inconsistent and plainly unfair at times. While MMA and boxing fans sometimes lose sleep over the judges reaching the wrong decision, the only thing worse than a fight being scored incorrectly is having fans carelessly throw around the term "robbery" anytime a fight is remotely competitive.

Often, large portions of the combat sports community have a tendency to label a fight a robbery when that simply isn't the case. As a matter of fact, legitimate robberies actually happen far less frequently than many people might think. As the overall combat sports fanbase continues to grow heading into 2022, we have reached a point in both MMA and boxing where nearly every single fight that is closely contested gets deemed a robbery by pockets of fans from far and wide. This widespread overuse of the term robbery often stems from the bias of unhappy fans when their preferred fighter loses a close fight. For example, if a five round fight is close from start to finish and they give the decision to Fighter A, then fans of Fighter B will claim it was a robbery even though the fight really could have gone either way. Simply put, as long as people are able to make an argument for their preferred fighter having won, they almost always tend to call it a robbery.

To give some much needed context, we will first take a look at some fights that are widely regarded as blatant robberies. Once we do this, I will briefly outline some fights that get treated like robberies despite that not being the case.

Fights that were legitimate robberies...

If you'd like to know what a true robbery looks like, consider watching the first meeting between Mauricio Rua and Lyoto Machida in the main event of UFC 104. After five rounds, the fight was awarded to Machida in what has come to be one of the most egregious decisions in UFC history. Every media outlet, analyst, fighter, and even UFC President Dana White agreed that 'Shogun' deserved the victory, yet all three judges saw it 48-47 for 'The Dragon'. To this day, it remains borderline inconceivable that Machida could have won the fight, which is precisely why this is a prime example of what a real robbery actually looks like.

The UFC 112 meeting between B.J. Penn and Frankie Edgar ended in similarly shocking fashion, when Penn was robbed by the judges who elected Edgar the winner. In particular, one judge awarded the fight to Edgar 50-45 which is seriously unacceptable. The overwhelming majority of the MMA world agreed that Penn had done more than enough in the first three rounds to have earned the judges decision. Again, this is a true robbery if I've ever seen one.

The year 2021 provided us with a couple more recent examples of what real robberies look like. First, the robbery of the year in mainstream MMA came under the PFL banner when Gleison Tibau defeated Rory MacDonald via split decision. The abysmal decision came after a three round bout in which the majority of people felt as though MacDonald won all three rounds, if not at least two. The decision was met with immense backlash, and even prompted MacDonald to file an appeal for the decision to be overturned, albeit unsuccessful. Second, Maycee Barber was awarded a split decision victory over fellow flyweight prospect Miranda Maverick at a UFC Fight Night despite clearly losing the first two rounds. These two fights are the best examples of robberies from the past year, yet they received far less backlash than razor close decisions that were anything but robberies.

As far as boxing goes, the best recent example of a robbery would be the first meeting between Tyson Fury and Deontay Wilder. Fury had clearly done enough to win ten of the twelve rounds in the eyes of most, yet the fight was ultimately ruled a draw. Again, this is what a true robbery looks like.

Fights that weren't robberies, but could have gone either way...

The abuse of the word robbery has become absurd. In the last few years alone, there have been several instances wherein a fight is extremely close and could go either way, yet people insisted on resorting to the word robbery the second they got the chance. It is truly one of the most toxic qualities a combat sports fan can have.

Some close fights that fit this description include Marlon Moraes defeating Jose Aldo and T.J. Dillashaw defeating Cory Sandhagen. Both fights were closely contested split decisions that were essentially coin tosses, yet the judges got crucified for their decision in both cases. These fights were not robberies.

Jon Jones had a controversial victory against Dominick Reyes last time out, and although I scored it 48-47 Reyes myself, it still wasn't an absolute robbery. Round 2 was about as close as it gets, and could have been scored for either fighter depending on how you look at it. You can make an argument for either man having won, and even though Reyes certainly had the stronger argument, the fight was wrongfully labelled a robbery considering both men did good work throughout the five round bout.

Pockets of MMA fans actually believe Colby Covington was robbed by the judges in his rematch with Kamaru Usman this past November (seriously, people actually think this). The fight was definitely close, but calling it a robbery is a prime example of how deluded/biased fans have come to abuse the term. The notion that anyone got robbed in this fight is simply ridiculous.

A similarly ridiculous occurrence took place on the boxing side of things when Gervonta Davis defeated Isaac Cruz this past December. Several people made their voices heard on social media platforms to argue that Cruz got robbed and that Davis shouldn't have gotten his hand raised. This absurd attempt to paint the fight as a robbery simply lacks foundation and doesn't have legs to stand on.

Where do we go from here?

Unfortunately, there is no clear way to remedy this issue. Fans will keep finding ways to call fights robberies when they aren't, and this might just be the way things are now. It seems as though every weekend people will complain about alleged robberies, which is exhausting and redundant. Anytime a fight is remotely competitive, people can find a way to call it a robbery.

Perhaps the best way forward is to tune out the voices and just ignore the constant abuse of the term "robbery" in combat sports today.