Hello there lineal title fans! This is the 4th edition of a continuing series that will focus on the lineal title implications of the latest season of the Professional Fighters League (PFL), which just kicked off a few weeks ago. So far, I've covered the Men's Lightweight, Featherweight, Light Heavyweight, and Welterweight divisions. You can catch up on these posts at the links below:

Today, I'll take a closer look at the Week 3 pairings taking place this Thursday, May 6th. This card features the Heavyweights alongside the Women's Lightweight division. Both divisions have some lineal titles on the line this season that I'm excited to share the details of. Let's start with the Heavyweight roster, shall we?
And, here's a big picture visual of what the division looks like today from a lineal title perspective: 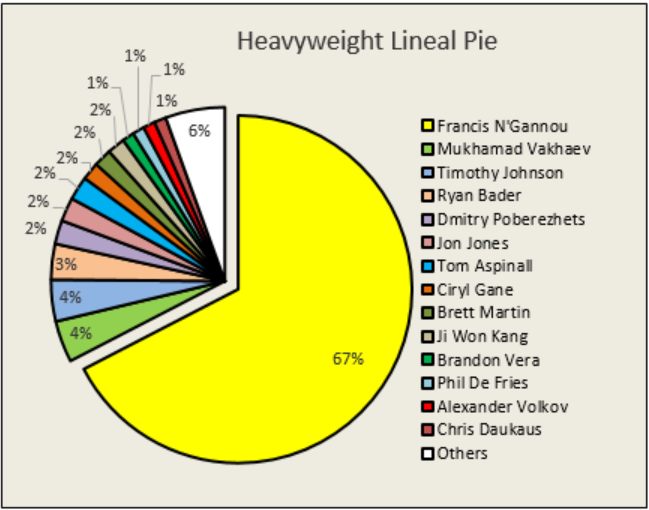 The key players on this season's PFL Heavyweight roster are represented in the 'Others' category because they each hold a single title. But, by the end of the season, one fighter has a chance to unify up to 3 titles and move up the list a bit.
Jon Jones appears on this list courteous of a victory over Shogun Rua that netted him 4 Open weight titles that each date back to the 90s. He'll have a chance to unify these titles with the dominant lineage if they can ever get the N'Gannou fight figured out.
Here are the details behind the lineal Heavyweight titles on the line this season:
Ante Delija (1 lineal title)
JVT
Lineal History: Edison Lopes (2016) → Ricardo Prasel → Ante Delija
Ante will defend against Bruno Capellozza this week.
Brandon Sayles (1 lineal title)
NFC
Lineal History: Brandon Sayles (2017)
Sayles defends against Usman this week.
Hatef Moeil (1 lineal title)
KOK
Lineal History: Hatef Moeil (2019)
Moeil was set to defend his KOK title against the reigning PFL champ Isaev, but that fight fell off the card for some reason and will be rescheduled.
The other half of this week's PFL card features the Women's 155 lb division. Here's a look at this season's roster:
And, here's a big picture visual of what the division looks like today from a lineal title perspective: 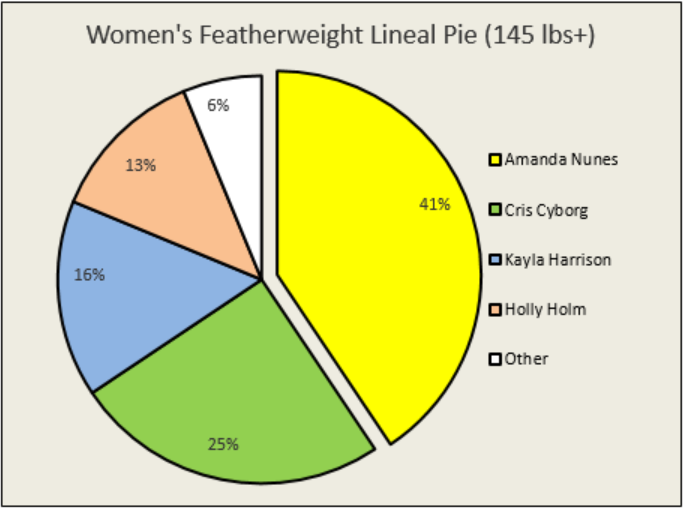 Kayla Harrison is the key player in this season of PFL, as usual. But, her first match against Mariana Morais could net her another title. In 2020, Morais won the inaugural Shooto Brasil title at 155 lbs. Here's a look at all of the titles on the line this week:
Kayla Harrison (5 lineal titles)
1. Gateway Fighting
Lineal History: Sarah Patterson (2017: 155 lbs) → Jozette Cotton → Kayla Harrison
2. DCS
Lineal History: Jozette Cotton (2017: 155 lbs) → Kayla Harrison
3. Watch Out Combat Sports
Lineal History: Larissa Pacheco (2018: 145 lbs) → Kayla Harrison
4. PFL
Lineal History: Kayla Harrison (2019: 155 lbs Tournament Champion)
5. Fury FC
Lineal History: Courtney King (2019: 145 lbs) → Kayla Harrison
Mariana Morais (1 lineal title)
Shooto Brasil
Lineal History: Mariana Morais (2020)
The winner of this weekend match up will certainly be the fighter to watch throughout the rest of the season. But, there is another title on the line elsewhere on the card...
Cindy Dandois (1 title)
Staredown FC
Lineal History: Cindy Dandois (2019: 145 lbs)
In 2011, Dandois won a title with a promotion known as Benelux. It was an impressive submission victory over striking sensation Jorina Baars who was trying her hand at MMA. Cindy would go on to lose this title from a lineal point of view to Olga Rubin in Bellator. And, the belts is now owned by Cyborg. In 2018, Dandois returned to the Benelux organization which was rebranded as Staredown FC and a brand new 145 lb title was eventually created in her second fight back with the organization in 2019. Dandois will put this title on the line this week against women's MMA pioneer Kaitlin Young.
That about does it for this week's lineal title action. Enjoy the fights, lineal title fans, and keep an eye out later in the PFL season. I've covered all of the weight classes for this season, but It'll be fun to do a Playoff update and see where are the titles stand heading into the Championships.
UPDATE: I unearthed another Heavyweight title that's worth mentioning here.
Serbian Battle Championship
Lineal History: Satoshi Ishii (2018) → Jared Rosholt → Ali Isaev
So, this means that Isaev will actually be defending a lineal title alongside his PFL belt. And, it means that 4 titles are up for grabs within the division this season.