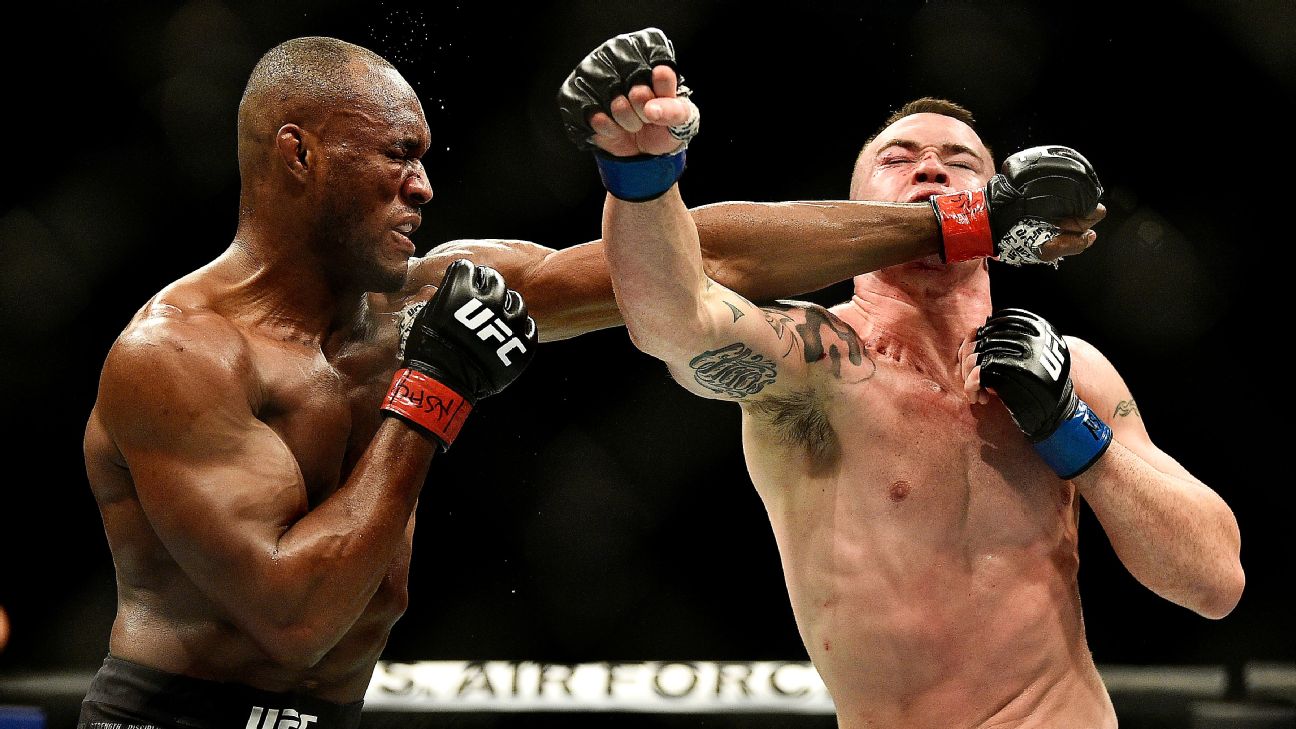 Usman (left) and Covington (right), slugging it out in the UFC 268 main event

UFC 268 is officially in the books, and to say it exceeded expectations would be something of an understatement (did you see that PPV opener?!).

In the main event of the evening, Welterweight Champion Kamaru Usman (20-1 MMA, 15-0 UFC) showed us once again that not only is he the best in the world at 170 pounds, but that he truly is MMA's current pound-for-pound king. 'The Nigerian Nightmare' earned the 5th defence of his welterweight crown when he defeated a poised #1 contender in Colby Covington (16-3 MMA, 11-3 UFC) via unanimous decision (48-47, 48-47, 49-46). Similar to their first meeting, the bout was closely contested and remained extremely competitive for the vast majority of its duration. Personally, I had initially scored the bout 49-46 in favour of Usman, giving him rounds 1, 2, 3 & 5. Upon rewatching the contest, I felt as though 48-47 for the champion was the proper score, giving him rounds 1-3 and giving the final two frames to the challenger. While I am willing to entertain the idea that Covington has a CASE for having won, you will have a difficult time convincing me he did the better work through 5 rounds. The right man won on Saturday night.

Both fighters managed to deliver yet another classic main event, and it is now time to assess the aftermath. How did the fight play out? Does Usman have a claim to welterweight GOAT status? Where does each fighter go from here? Let's discuss.

While few anticipated the rematch would succeed in matching the first fight from an entertainment standpoint, Kamaru Usman and Colby Covington came pretty damn close to reaching that level when they delivered a thriller for the second time.

As far as signifiant strikes are concerned, both fighters threw considerably less this time around. Just like their 2019 meeting at UFC 245, Usman managed to outland Covington, beating him 123-107 in signifcant strikes and 158-119 overall. It is worth noting that Usman was actually less accurate with his significant strike output this time around, landing at a clip of 41%, while Covington showed to be slightly more accurate than his first encounter with the champ, landing at a clip of 38%. Usman maintained the decisive power advantage we saw in the first fight, and once again, this proved to be the deciding factor in the end. Usman's pair of knockdowns scored late into the second round was certainly the biggest moment of the fight, but still did not warrant a 10-8 on my scorecard despite a minority of media outlets granting him one.

A big storyline heading into this fight was the wrestling of Colby Covington and whether or not he would attempt to test it against the renowned 100% takedown defence of Kamaru Usman. As many had predicted, Covington did try to mix in his wrestling but was denied each time he attempted to get the fight to the mat, ultimately scoring 0/11 takedowns attempted. While Daniel Cormier and Din Thomas were adamant on the broadcast that Covington should have been credited with a takedown, the official stats do not reflect this belief, meaning Usman's remarkable 100% takedown defence remains intact. Find out why Covington wasn't credited with a takedown here. As a matter of fact, it was actually Usman who scored the only takedown of the fight, going 1/1 on his attempts.

Once the final horn sounded, it was close but fairly evident that Kamaru Usman had done enough to earn the judges' decision.

Following UFC 268 at the post-fight press conference, Dana White declared Kamaru Usman to be the greatest welterweight the sport has ever seen. For those familiar with their MMA history, this is a rather bold claim for a number of reasons. The welterweight division has historically been one of MMA's premier divisions, housing names such as Matt Hughes (45-9 MMA, 18-7 UFC) and Georges St-Pierre (26-2 MMA, 20-2 UFC). Usman was already an undeniable top-three welterweight ahead of this weekend, but with the win and another title defence to his name, he is now tied with Hughes for second most consecutive defences in division history at 5. Although a portion of the population might still argue that Hughes is ahead of Usman, the argument for the latter is stronger than ever and is hard to dispute at this point. The claim made by the UFC President about Usman being the best welterweight in history was met with outrage by a large portion of the MMA community considering Georges St-Pierre has held that distinction since before Usman had even made his MMA debut. For the sake of argument, let's take a minute to compare the two side by side and figure it out.

Kamaru Usman is undoubtedly in the fast lane en route to becoming the greatest welterweight of all time, already having amassed 5 title defences and an astounding 15-fight win streak inside the octagon, the second longest in the promotions history behind the great Anderson Silva who managed to win 16 straight during his run. The only setback in Usman's career came in what was then just his second professional contest, and the Nigerian talent has looked nothing short of dominant in every outing since. A resume including wins over the likes of Colby Covington (x2), Jorge Masvidal (x2), Tyron Woodley, Gilbert Burns, Leon Edwards, Demian Maia, Rafael dos Anjos and Sean Strickland has put Usman into a position in which his credibility can no longer be denied. Once you consider his status as an Ultimate Fighter winner who went on to win a championship and defend it several times, Kamaru Usman has done more than what the overwhelming majority of welterweights could ever dream of. Not to mention he currently holds the longest winning streak ever in the UFC's welterweight division.

Georges St-Pierre is not only widely regarded as the greatest welterweight of all time, but he is debatably the greatest of all time period. St-Pierre twice held the undisputed crown at 170lbs, with his second reign consisting of 12 straight wins and a record of 9 consecutive title defences in the division. Although St-Pierre tasted defeat on two separate occasions inside the octagon, he went on to avenge both losses thus eliminating any doubt that he was the greatest. Having earned wins over the likes of Matt Hughes (x2), B.J. Penn (x2), Josh Koscheck (x2), Carlos Condit, Nick Diaz, Jake Shields, Johny Hendricks and Jon Fitch, the resume of St-Pierre remains hard for anyone the poke holes through. A two-time undisputed champion who accumulated 9 consecutive title defences, it is hard to make a case that Usman has exceeded the greatness of 'Rush' at this time. It is also worth considering GSP's status as a two-weight world champion, despite that not having an impact on the welterweight GOAT discussion.

Is Usman the GOAT at 170lbs? Answer: Not yet

Where do Usman and Covington go from here?

Kamaru Usman has reached the point wherein he has essentially cleaned out his division, at least as far as deserving challengers go. In most cases, we would normally see a champion this dominant seek a move up in weight to claim a second division title, but Usman's close relationship with middleweight kingpin Israel Adesanya makes that highly unlikely. I suppose we will see the pound-for-pound king in yet another rematch next time out, assuming Leon Edwards can defeat Jorge Masvidal at UFC 269 next month. While this makes the most sense, I would also like to see surging contender Khamzat Chimaev get booked against an opponent such as Gilbert Burns sooner rather than later. With a win, Chimaev would likely be on the short-list of title contenders at 170lbs. Let's not forget that Vicente Luque, who served as a backup for the UFC 268 main event, is waiting for his chance to dethrone the champion. Although one more win is probably needed. Book Usman v. Edwards 2 assuming Leon secures the Masvidal win.

The stock of Colby Covington did not drop whatsoever this weekend, having once again pushed the consensus best in the world to the absolute limit. Seeing as Covington will likely not see another title shot for as long as Usman is around, the grudge match with former training partner Jorge Masvidal is a no brainer. Win or lose next month against Leon Edwards, Covington is adamant that this fight must be next, and he is right. Perhaps a TUF season with these two as coaches? Both having now lost twice to the champion, it would be interesting to see who can remain a top tier talent in the division. Colby Covington showcased his skills very well this past weekend, and he currently resides at #14 in my personal pound-for-pound rankings. Covington v. Masvidal in a five round co-main event, please.