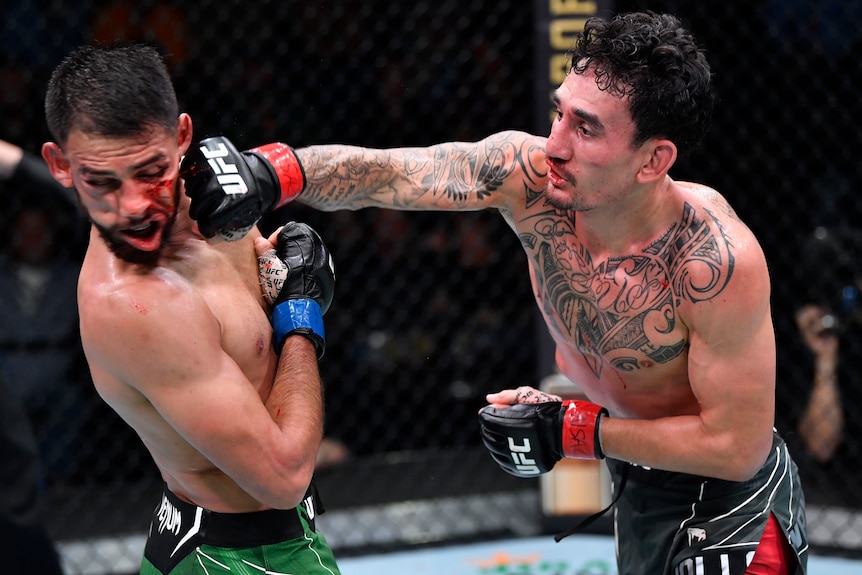 Max Holloway (23-6 MMA, 19-6 UFC) added yet another win to his exceedingly decorated resume when he defeated the returning Yair Rodriguez (13-3 MMA, 8-2 UFC) in what can only be described as a fight of the year contender. ‘Blessed’ went to absolute war with the highly touted Mexican talent en route to a very competitive but rather decisive unanimous decision win (49-46, 48-47, 48-47), marking his second consecutive victory since his pair of setbacks against reigning champion Alexander Volkanovski (23-1 MMA, 10-0 UFC).

After being declared the winner, the Hawaiian took to the mic to praise Rodriguez for his performance before ultimately being asked who he would like to meet in his next octagon appearance. When asked, Holloway briefly mentioned his desire for a third fight with Volkanovski, but also named current lightweight champion Charles Oliveira (31-8 MMA, 19-8 UFC) and MMA megastar Conor McGregor (22-6 MMA, 10-4 UFC) as potential future opponents. Having dropped three names that interest him, the 29-year-old former champion appears to be giving himself options for his next outing (or at least he’s trying to). Holloway made it clear that he won’t be chasing a fight with anyone, stating he’s game to fight whoever UFC matchmakers wish to put in front of him.

Although these three options vary considerably in terms of likeliness, it is still worth taking a closer look at each potential matchup to determine exactly what makes the most sense for the ‘Blessed Express’ moving forward.

Option 1: Trilogy with Volkanovski (most likely)

Beginning with the obvious and most likely option by far, a trilogy fight with Alexander Volkanovski to finally determine who is truly the greatest featherweight in the world seems inevitable. Both men have proved themselves to be a level above the rest of the division, and quite frankly it is the only championship fight to make given the current landscape at 145lbs.

Historically speaking, fighters who go 0-2 against the sitting champion do not receive a third crack in the UFC. However, due to the polarizing outcome of their second fight, there is high demand for these two to square off one last time for featherweight supremacy. Since their most recent clash at UFC 251, Holloway has gone 2-0 against fellow top contenders in Calvin Kattar and the aforementioned Yair Rodriguez while Volkanovski took the time to coach a season of The Ultimate Fighter opposite Brian Ortega before eventually dispatching him in what was a second successful title defence.

The highly anticipated third meeting would undoubtedly be the biggest fight in featherweight history since Aldo-McGregor at UFC 194, and probably the most meaningful fight in division history in terms of the implications it would carry. These two featherweight greats will need to settle the score sooner or later, and right now this would appear to be most likely for Max Holloway’s immediate future.

Once upon a time, a young Max Holloway squared off with a pre-megastar Conor McGregor on the preliminary portion of a UFC Fight Night in 2013. The bout went the distance, which saw McGregor defeat the relatively green Holloway via unanimous decision (30-27, 30-27, 30-26). Both men have done plenty to improve their respective games since their 2013 contest, having accumulated multiple world titles between the two of them.

A rematch between the pair would be a massive event and easily the most lucrative fight of Holloway’s career. Holloway and McGregor have been taking turns dropping hints on social media suggesting a fight with one another could be next for both, meaning Holloway would have to forfeit what appears to be a guaranteed title shot in favour of a hefty payday with the Irishman. ‘Blessed’ definitely didn’t shy away from the topic of rematching McGregor leading up to his fight with Rodriguez, reassuring anyone who would listen that he is in fact on the UFC’s short list for potential McGregor opponents upon his return from injury. Despite having taken considerable damage in his five-rounder with Rodriguez, Holloway will almost certainly be ready for action again before ‘The Notorious’ is able to make the walk, so it is unlikely that their schedules will align.

It would be very intriguing to see these two meet in the octagon so long after their initial encounter, as we would get to witness how Holloway’s trademark pace and output stack up against the precision and power of McGregor. It would undoubtedly be a very different fight than the first. Considering both athletes pride themselves in their boxing abilities, perhaps matching them up would reveal who’s boxing is at a higher level. In the end, a lightweight bout between Holloway and McGregor is a pay-per-view headliner capable of getting the entire MMA community on board.

The least likely option by a mile, Max Holloway’s trifecta of post-fight callouts included none other than lightweight titleholder Charles Oliveira. Many fans tend to forget, but Holloway and Oliveira once squared off in a Fight Night main event in the summer of 2015. Back then, Oliveira was the 7th ranked contender in the featherweight division riding a four-fight win streak. The bout ended in anticlimactic fashion less than two minutes into the first round when a botched takedown attempt against the cage resulted in an esophagus injury for the Brazilian, meaning Holloway was awarded the TKO victory.

Despite the odd nature of their first fight, Holloway is holding his win over Oliveira extremely close to his chest in what is likely an attempt to secure a lightweight title fight sometime in the future. It is worth noting that ‘Do Bronx’ called for a rematch with Holloway following his submission win over Jim Miller in 2018, so perhaps this is a fight he’s been wanting to get back behind the scenes. Regardless, even if both men wished to fight each other next, Dustin Poirier and the sea of contenders at 155lbs might not take so kindly to the idea of Holloway jumping the line for gold. The fact that Poirier, who meets Oliveira at UFC 269 next month, has twice defeated Holloway does not help the Hawaiian’s case for a lightweight title shot either.

The state of affairs at lightweight simply doesn’t have room for Holloway at this time, and he would likely need at least one win in the division before even being considered for a second crack at lightweight gold after coming up short at UFC 236 in 2019. Although it would be exciting to see this pairing get booked, a fight fails to make much sense for either fighter's next move. The ambition of Holloway to call for a fight with Oliveira should be admired, but this is not the next step his career needs right now.

Despite Max Holloway appearing somewhat unenthused at the prospect of a trilogy in his most recent post-fight interview, another fight with Volkanovski is simply an eventuality at this point. Many feel as though it might be a good idea to let both Holloway and Volkanovski take other fights and let their rivalry breathe while building up a trilogy, but this is just too big of a fight for the featherweight division to risk losing. Book Max Holloway against Alexander Volkanovski in a trilogy fight between two of the best pound-for-pound talents in the sport. Holloway’s money fight will have to wait, because this is a must.