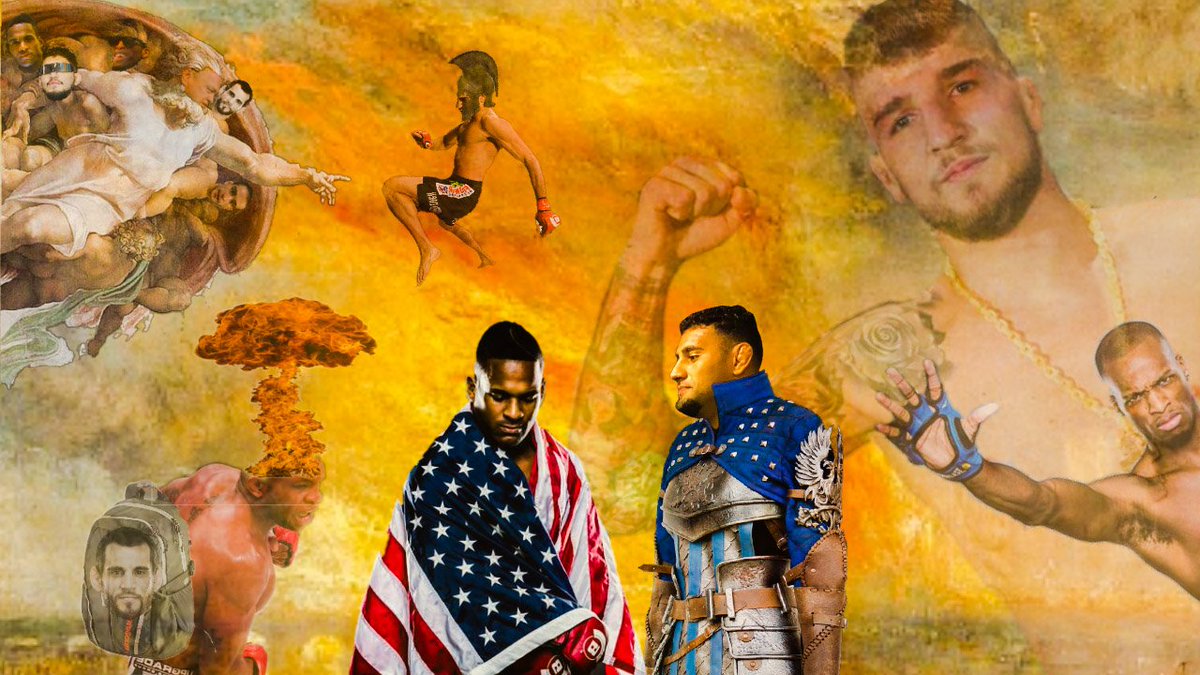 Greetings Elbows, I've used this break in the action to do a statistical analysis of Bellator's 170 lbs division in an attempt to rank the athletes in an admittedly subjective way, but one informed by a statistical framework to put a context to mere win/loss records or the all too popular "which guys I like" or "remember that cool thing back when" methods of ranking.

NOTE: This is not a measure of skill, or attempt to rank via 'who I think beats who'. It also isn't an automatic system, in that it still requires judgments weighing different pros and cons. The information here can be interpreted in various ways to result in a different ranking depending on what someone values most (frequency of competition, win/loss, level of opposition etc). If you make it all the way through, give your own top ten down below in the comments. If we get enough rankings in the comments maybe I'll do a BE fan-consensus rankings fanpost.

Q: Teep, just what have you done here?

Phenom Lima sits atop the bracket, not only because he's holding WW gold for the 3rd time, not only because he holds wins over the next highest ranked fighter and indeed 3 others in what I deemed to be the top 7 (plus the now departed Rory MacDonald who'd also be top ten even coming off a loss), but because his stats back up the fact that he's the most successful against the highest level of competition, and has THE quality streak in the bracket. He'd be rightly considered no.1 without the stats, but they back up his position as the king of WW in Bellator.

'Monsoon' has put together a 4 fight win streak at WW including a recent victory over the ex-champ Koreshkov. His differentials under various criteria hit the mark to have him sit at no.2 in this ranking. NOTE: Due to Larkin's career being in stages coming down the weights I counted only his WW career for this exercise (11 bouts).

'Dynamo' Amosov has the longest pro streak in the company...BUT his overall SOC across those 23 fights reveals less-than-stellar opposition on the average. In his last 4, however, the numbers rocket up with the opponent average at 18.5 wins, 5.3 losses for a 13.3 differential. His case for ranking doesn't exceed Larkin, but does set him above no.4-10 as I see it. He has great momentum, but largely based on those last 4 fights.

Michael Venom Page, or MVP rebounded from his lone career loss to Phenom Lima with 3 quick finish wins (2 of them against decent competition). Alone it doesn't make the strongest case for ranking, but factoring in his win over Daley preceding the Lima loss, 2019 gave him 1 quality win, 2 decent wins and 1 marginal win along with the lone loss to today's no.1. His is the extreme end of activity building momentum and sits him just above Fitch (who occupies the other end of the activity spectrum).

'Old Man Fitch' as he calls himself - shocked the MMA world by taking then reigning champ Rory MacDonald to a draw in the 170 lbs tournament, and although he hasn't fought since and it by itself doesn't add to his 5 fight win streak - the lineal WSOF champion's stats show a sustained holding-of-one's-own record of 29-5 since his 'step up' way back in the day and he is winning (at his own pace). He's not been active enough to outrank Lima, Larkin or Amosov and his only recent win of Daley is shared by MVP who has many more recent wins to argue for ranking. Still, he's not lost in years and until he does, retires, or alternately someone else builds a better streak, he holds onto a top ten spot, especially as (by my measure) the next most worthy Daley is a recent victim of his. As time goes by if Fitch doesn't further compete he'll gradually fall in the rankings.

'Semtex' is explosive by name, explosive by nature. He has the most PSU fights of the welterweights, and his PSU level of opposition has averaged impressive numbers to be drawn out over 48 fights. His not too distant knockout of current no.2 Larkin makes a good argument for his good ranking but not above Lima (obviously as he lost to him), Larkin (who's red hot since wheras Daley lost twice since), Amosov (perfect so far as a pro), MVP (beat him) or Fitch (Fitched him real good).

'Spartan' is the highest ranked WW coming off a loss. Occupying the no.7 slot, the ex-champ holds a win over Lima and judging by his PSU stats has fought at a high level for 17 fights, winning 13. Most notable is the average record of those who beat him (Lima x2, Larkin and Askren). Statistically only the very best get past Spartan if at all. His PSU wins bear a rather respectable W/L/D/Diff so although he can't make a case to be above 1-6, his body of work is enough to have him above those with less epic streaks than the top dogs (but below MVP/Fitch/Daley who've more direct momentum).

'Judo Jim' has gotten 2 straight wins with none too shabby average stats. His last victim Giorgio Pietrini was 6 fights unbeaten (5-0-1). This is the point at which the rankings become highly subjective according to criteria preference. I gave him no 8 based on the 2 wins, and him winning 6 of his last 8 (although only 4 vs decent numerical opposition). Everything is quite fluid down here toward to bottom of the top 10.

Enkamp lost his 1st pair PSU but has 2 good wins since. He squeaks in at no.9 above Storley who has more consecutive victories, but vs lesser overall opposition. With another win a lot of Bellator WW could argue over no.7-10 especially.

'Storm 'Storley' snags the no.10 spot based a little bit on his 11 straight wins, but mostly by his recent 4 which - although not epic - do provide him a measure of momentum.

Q: Who else is there?

Arguments could be make for others to be at the bottom end of the top ten such as:

Ruth has a respectable level of recent competition and a direct win over Jackson but lost his last fight (to then 22-0 Amosov). Jackson lost to Ruth, but rebounded with a numerically solid win over Kunimoto. Holding him back is his weaker level of overall competition and more losses (to weaker competition) than Ruth. By my measure both could potentially crack the top ten with a good win especially as others win and lose providing gaps to jump in to.

Mein comes off 2 wins and Millender 1. Mein has the better 'streak' of the two statistically, but lost 3 straight preceding these wins, keeping him from the top ten for now. Millender rebounded from 2 straight losses with a win, but not a particularly high level one (numerically) although he did win 9 straight leading up to those pair of defeats. A good win for him would give him a solid argument for top ten inclusion.

Kauppinen landed a good win and has 4 PSU fights going 2-2. Another solid win and he could argue for top 10 depending on what everyone else is doing. Newly signed Ross 'The Hitman" Houston has just the one PSU bout which he won, which combined with his 7 other wins has him poised on the edge of ranking should he find further success at a similar or higher level to his last. NOTE: Houston also had a PSU bout go to No Contest which was excluded from the measurement. ALSO NOTE: Kaupinnen has fought at other weights so his WW body of work is limited.

Gracie has just the lone career loss (to then champ Rory MacDonald) but his PSU wins aren't particularly significant numerically so short of an epic win he's probably 2 wins away from the top ten. Paterno won his last and is 6-1 PSU with those wins of a higher average quality than Gracie's but he'd need more to crack the top 10.

Voelker put together 4 consecutive wins albeit against numerically weaker opposition, with a good win to join them, one could make an argument for him as top ten in the bracket.

Here's everyone outside my top ten who's had at least one 'step up' numerically, arranged from consecutive wins to consecutive losses.

This part isn't ranked, they're just arranged from wins to losses for convenience. If I realize I forgot anyone I'll update.

Q: How about fighters who've yet to have PSU bouts?

Here they all are arranged from win streaks down to losing streaks. Due to not having had a statistically significant 'step up' they were ineligible for top ten consideration in a bracket with this many experienced fighters. It's worth mentioning Bellator brings in fighters on non-exclusive contracts so the fighters listed in this article doesn't necessarily comprise the total number of WW who competed for the promotion recently. I also left out a few who I was unsure of the status of, none of whom would be in the top 10 discussion within this framework.

It should be noted Kiefer Crosbie has been gradually working his way down toward lightweight and may feature on 155 lbs lists moving forward.

Inherent bias in the system?

This way of measuring SOC punishes athletes who take steps up then back down, it's only a measure of average SOC over periods of time, there are a few extreme outliers in records that make glancing at the details worthwhile for a reasoned ranking. If need be I can do a follow up post with all of the underlying charts. To be clear these generated stats guided my ranking, but didn't run it.

Q: Would it have killed you to put their level of activity in the charts?

In a future edition I plan to hopefully include that info as well as a couple of other adjustments, it's a work in progress, limited in scope by the time I can carve out to do it. Constructive criticism is welcomed. Hope you enjoyed, list your Bellator WW top ten in the comments.

Ya know, having read this I gotta say...