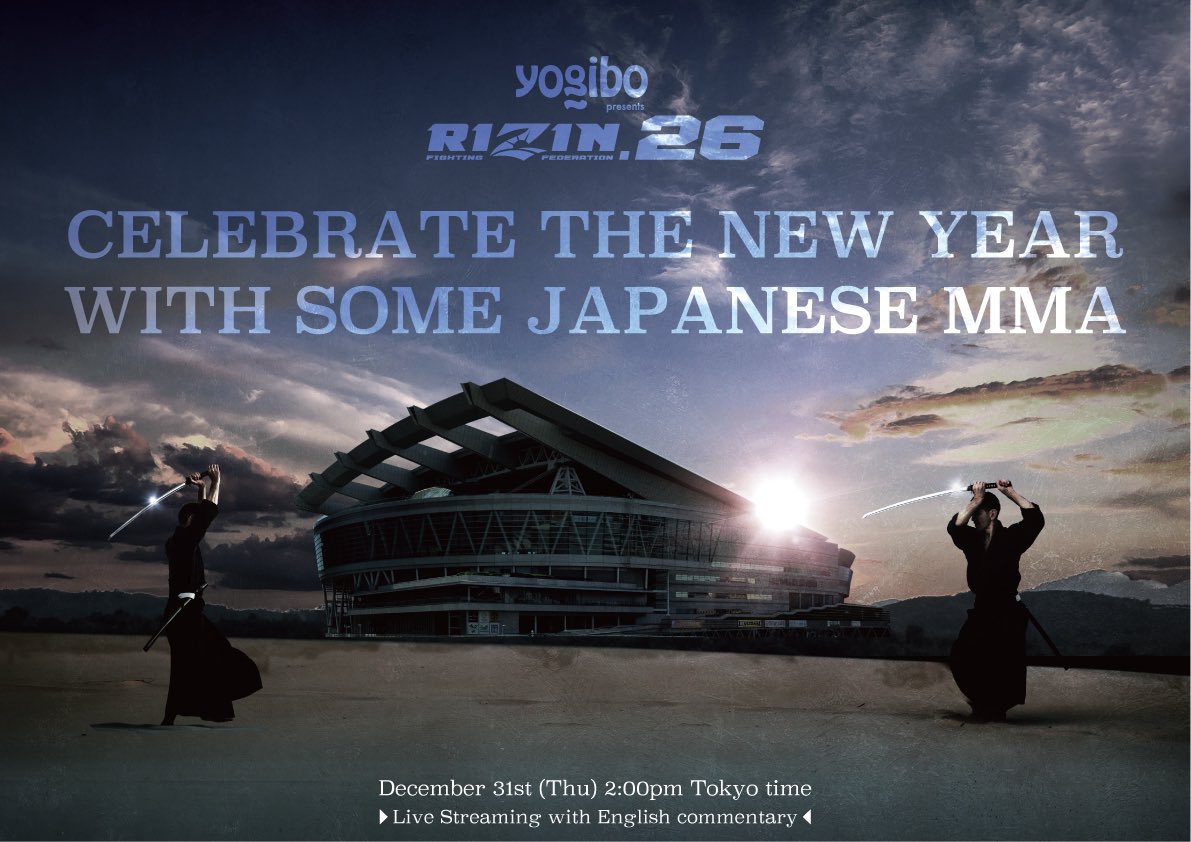 (EDIT 1/1: The event is finished but here's the Fight Diary recap.)

It’s that time of year again with just a few more days until the RIZIN New Year’s Eve extravaganza of JMMA wonderment live from Saitama Super Arena. The event will be internationally broadcast on LIVE NOW on Thursday January 31 starting at around 1PM in Japan. Make that 12-15 hours earlier in the U.S, or I guess about half that in Europe.

After a rough year, RIZIN has put together a pretty damn good show, especially considering the difficulty of getting foreign fighters into Japan due to pandemic restrictions. Also, they’ve significantly dropped the PPV price compared to their last few offerings and have brought back the English commentary team of Joe Ferraro and Frank Trigg. These are all good things and RIZIN should definitely be praised after some fundraising pleas and pricing decisions I found in questionable taste earlier in the year.

As far as the specifics, the highlight fight everyone is waiting for is the main event rematch between Kyoji Horiguchi and Kai Asakura. Asakura stunningly defeated Horiguchi in a non-title fight in what was the biggest upset in MMA in 2019. Asakura then went on to win the title when Horiguchi gave up the belt due to injury (with current UFC fighter Manel Kape jumping in briefly). Now Asakura and Horiguchi fight again in a legit title fight main event on the biggest night of the year for JMMA. This is an interesting fight for lots of reasons, foremost to see who is the new king of RIZIN. Can Kyoji come back from his injury and show his once dominant form or is Kai just as good as he seems to be?

The co-main has kickboxing wunderkind Tenshin Nasukawa facing off against threatening Thai fighter Kumandoi Phetjaroenvit. I admittedly don’t know much about this guy, but apparently he beat ONE Championship star Rodtang Jitmuadong in some shady kumite fight and Rodtang gave Tenshin his toughest test (outside of Floyd Mayweather) so make of it what you will. Of course, it seems every time Tenshin fights the Twitter experts mightily talks up his opponent and his opponent inevitably gets stomped.

There are a baker’s dozen more fights and not all are going to get a mention but I’ll follow up with a few more thoughts (I cover all the fights "extensively" in my Fight Pizza pictorial preview): There’s a really weird and possibly really depressing exhibition match between MMA-legend Takanori Gomi and kickboxer Kouzi. For 42-year-old Gomi’s sake I hope the rules are strictly boxing and there’s no kicking involved. Kai’s brother Mikuru Asakura is given a get-well opponent in part-time fighter Satoshi Yamasu (who many are talking up – I just don’t see it) after losing in his virtually pre-ordained title try at RIZIN 25. I don’t think the women’s title fight will be very competitive, but it’s possible Miyuu Yamamoto finds enough lay and pray to threaten Ayaka Hamasaki.

Otherwise, two super legit fights I’m excited to see are Yuki Motoya vs. Naoki Inoue along with Ulka Sasaki vs. Kenta Takizawa. Two somewhat goofy fights I’m looking forward to are Minowaman vs. Tsuyoshi Sudario and Kyohei Hagiara vs. Ren Hiramoto. Should be a fun time. See you on Twitter for the fights.

For my full RIZIN hieroglyphic preview, visit Fight Pizza and check back for the recap after the event.