Before Conor McGregor’s shock retirement announcement on Monday, a McGregor fight was in the works for a co-main event slot to Cormier vs Lesnar. Conor responded by saying he would only ever fight in the number two slot if he had a part of the UFC ownership. It’s not the first time Conor has gone on record as saying he wants a piece of the pie. But the real question is should he get it?

Hey guys quick announcement, I’ve decided to retire from the sport formally known as "Mixed Martial Art" today.
I wish all my old colleagues well going forward in competition.
I now join my former partners on this venture, already in retirement.
Proper Pina Coladas on me fellas!

For some of you reading this, the concept may seem ludicrous. The overarching lesson throughout sports and entertainment is that no one man (or woman) can transcend the sport itself. Mixed Martial Arts and the UFC will stand long after McGregor rides off into the sunset. We saw it with Chuck Liddell, Randy Couture, Georges St Pierre, hell even Ronda Rousey. However, it still can’t be denied that Conor McGregor was one of the reasons that the Fertitta brothers managed to get the $4billion price tag when they sold the company in 2016. 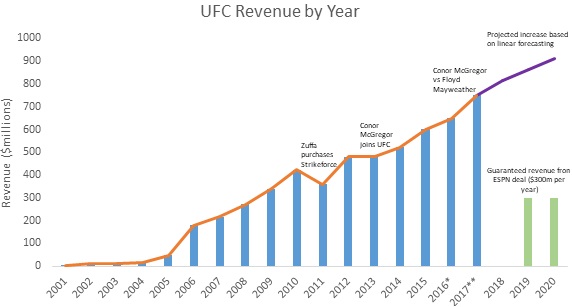 After conducting basic statistical analysis on UFC revenue by year, the UFC grew at a similar rate from 2006-2010 compared to 2013-2017. Conor McGregor no doubt contributed significantly to revenue during his most active period in the UFC (2013-2017). However, the UFC machine is by no means a 'one man army'. In fact the revenue growth rate has remained relatively constant from 2006-2017 excluding the slight dip in 2011, which was potentially onset by the transition of Zuffa purchasing Strikeforce.

Linear forecasting analysis shows based on growth from 2001-2017, the projected revenue by 2020 will be circa $911million. While a caveat should be put in place, that we don’t know what the impact of the ESPN deal will be but a guarantee of $300million per year for the next five years should keep the machine well oiled. Notwithstanding, Conor McGregor’s contribution to the sport through his antics and unique fight promotion style cannot be understated. McGregor dominates Pay Per View (PPV) buys with his main event fights being in the top 4 in the all-time UFC PPV buy list.

Although a plethora of fight fans believe that this is not the last we've seen of Notorious, the only way we will truly be able to understand the Conor McGregor effect is by observing the impact on revenue and viewership after he hangs up his gloves. Please do leave your thoughts on whether you think Conor McGregor deserves a ‘piece of the pie’.

2015 Revenue figures based on Forbes article

**2017 Revenue figures based on Forbes estimate