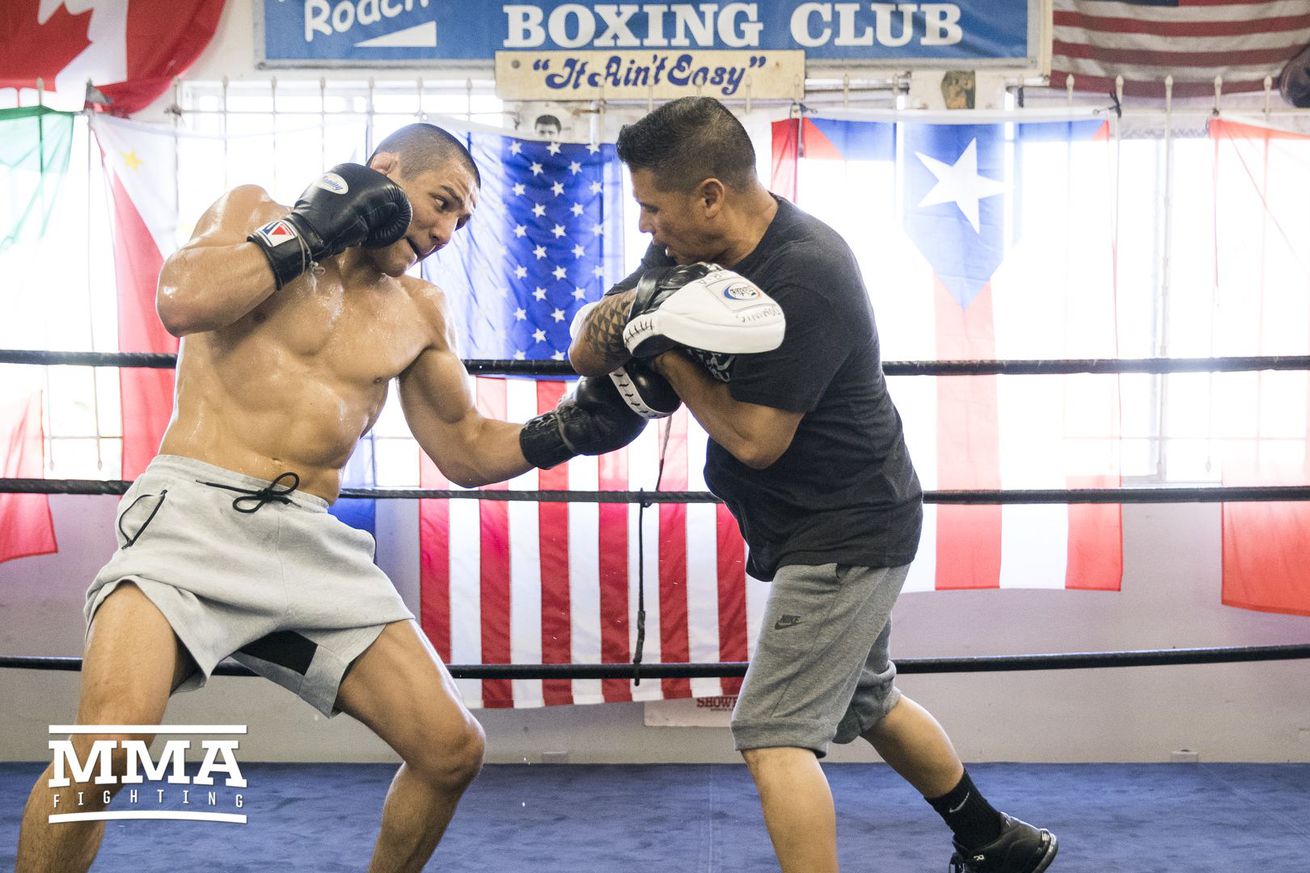 AARON PICO is a mixed martial arts prodigy, some have even called him the greatest MMA prospect of all time. Best known for his phenomenal accomplishments in wrestling -- such as being the first teenager to qualify for the Olympic trails in 40 years -- he's also competed in both pankration and amateur boxing as a youth. He's currently the only MMA fighter that regularly trains under famed boxing coach Freddie Roach at his Wild Card Boxing Club, and has put in rounds with the likes of former world champion Miguel Cotto.

Since losing his debut the 21 year old has gone on to win 3 straight, all first round knockouts against significantly more experienced opponents. Next month he will be taking on the toughest challenge of his young career when he faces the former LFA bantamweight champion and Bellator title challenger Leandro Higo to open up the main card for 'Mousasi vs. MacDonald'.

His opponent Higo has a record of 18-4 and made his Bellator debut last year when he dropped a split decision to then-champion Eduardo Dantas. In his next outing he rebounded with a win over Joe Taimanglo before being submitted in his championship bout against reigning champion Darrion Caldwell. Higo will be moving up to featherweight to take on the blue chip prospect but make no mistake about it, this is a massive step up in competition for Pico with only a year of experience and just under 6 minutes of cage time. 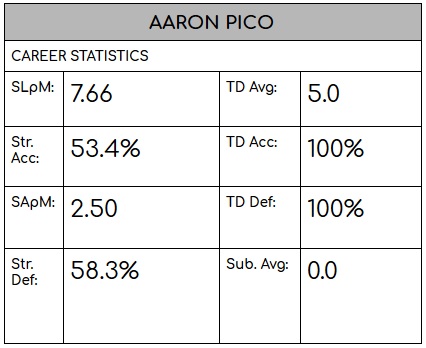 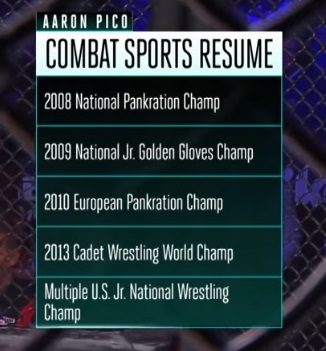 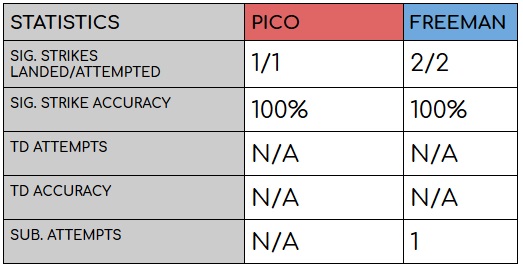 Pico made his MMA debut in the lightweight division against Zach Freeman on the PPV main card of Bellator's event in Madison Square Garden. His opponent Zach Freeman had a record of 8-2, a six year professional with his most notable fight being a 5 round decision loss against then-reigning RFA lightweight champ Thiago Moises. On paper Freeman was the older, bigger and much more experienced fighter but due to the monumental hype behind Pico he was still a 6 to 1 underdog.

The fight lasted only 24 seconds. Freeman dropped Pico with the first punch he threw -- a counter right uppercut that landed just as Pico landed a right hand of his own. However Freeman remained standing while Pico dropped to his knees. Freeman immediately capitalized on the moment by latching on to a guillotine choke and forcing Pico to tap 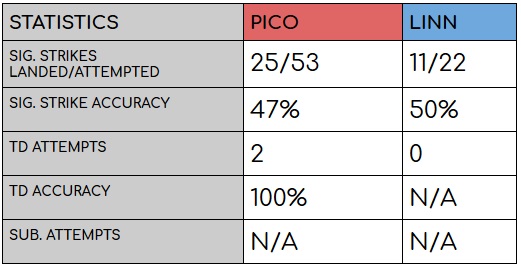 In his sophomore outing Pico dropped to the featherweight division to fight Justin Linn. Linn had a record of 7-3, in his first eight fights he went 7-1 until dropping back to back fights against UFC vets Cody Gibson and Matthew Lopez. He also had a single amateur fight on his record when he was submitted by future TUF winner Chris Holdsworth.

Pico threw a high volume of strikes (53) in less than four minutes, with a successful connect rate of 47% on significant strikes. He also took Linn down twice with ease and scored with some ground and pound. Despite Linn spending most of the fight defending himself against Pico's unrelenting pace he still managed to land the most significant amount of strikes on Pico to date (11) and actually had a successful connect rate of 50%. The reason for this was due to Pico's aggressive pursuit of the knockout, he was so proactive with his offense that his defense became an afterthought.

Many times during the fight Linn would simply cover up and take punches on his gloves and arms before firing back and landing on the open Pico. But even with Pico being over aggressive in this fight he still landed more than twice as many strikes as Linn and at 3:45 in the first round he caught him with a perfect lead left hook that put Linn to sleep. The super prospect was back. 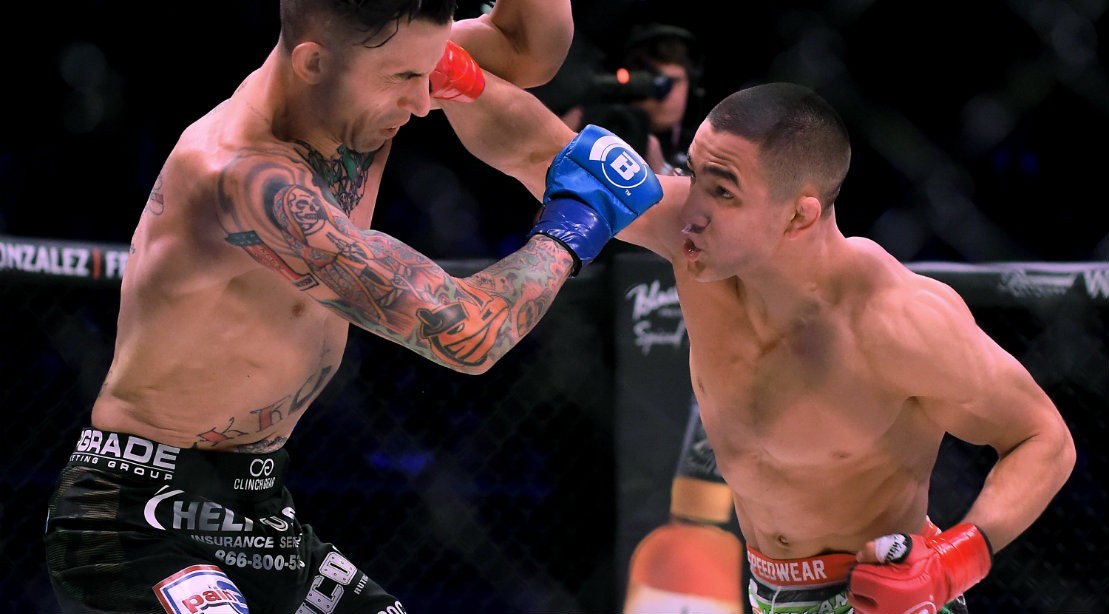 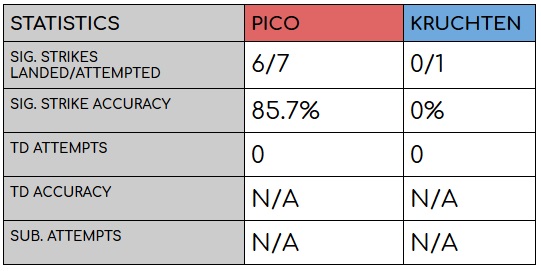 Now with his first win under his belt Pico met his next challenger on the 'Rampage vs. Sonnen' main card. His opponent was the 12-3 Shane Kruchten, nicknamed 'The War Rhino', he was a marine associated with 10th Planet Jiu Jitsu. Kruchten was 12-1 in his last 13 fights, with 9 of his wins coming by stoppage. And Pico just ran through him.

Pico landed 6 of his 7 significant strikes, with Kruchten landing zero. Kruchten was dropped by a body punch early, though he regained his composure only to then get folded like a chair when Pico again landed another body shot. The contest lasted only 37 seconds, a flawless performance. 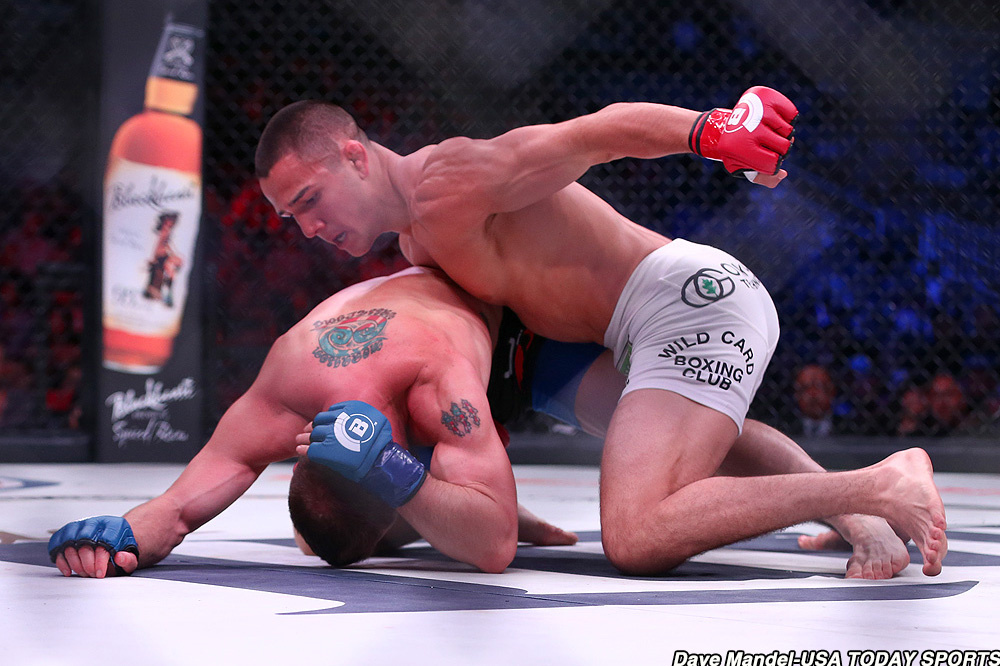 In his most recent fight at Bellator 199 Aaron Pico faced Lee Morrison. Morrison was on a 4 fight winning streak and had a journeyman record of 19-8, the best win on his record was Julian Erosa, a TUF 22 semifinalist who Morrison defeated by unanimous decision.

Like Pico's other fights this was a short but quick paced affair. Morrison landed only 3 significant strikes to Pico's 14 and had all 3 of his takedown attempts effortlessly shut down by the highly touted wrestler who finished him with strikes just over a minute into the fight.

Disclaimer: These numbers are subject to error, I did my best to count the significant blows but without adequate ability to slow down the footage I can't confirm it to be as accurate as sources such as FightMetric, therefore these should be looked at as just close approximations rather than fact. However it should suffice as a glimpse into the skills that Pico has shown in his career thus far. Hope you enjoyed the read.