As a long time fan I can fondly remember nostalgic days of Pride and amazing displays of heart and skill, but, I also remember fondly the days of Bruce Lee when he made the idea of training in multiple martial arts fun and culturally acceptable. As he pondered on the idea of MMA he came across and embraced a concept known as the centerline.

I know I said, that today we would talk about Layers of Defense in MMA (The Spider's Web as we called it back in the day). But, this Centerline Concept is really important for understanding defense and just about every other technique. I can't just gloss over it in my next article. Once you know what it is you can easily understand the why of things and how fans and judges use this concept even if it isn't fully fleshed out in their minds. Remember, every smart move and dumb move is done to defend your centerline and attack your opponents. I applaud every person's attempt to protect themselves. Soon, you'll know how.

There are over 500 mma gyms, a plethora of martial styles, variation of every strategy and technique. I just want to simplify it. Keep your eye on the centerline and everything will start to make sense. So lets start with one of Bruce Lee's famous concepts.

Since most people started off enjoying different sports. we will explain through what we already know. 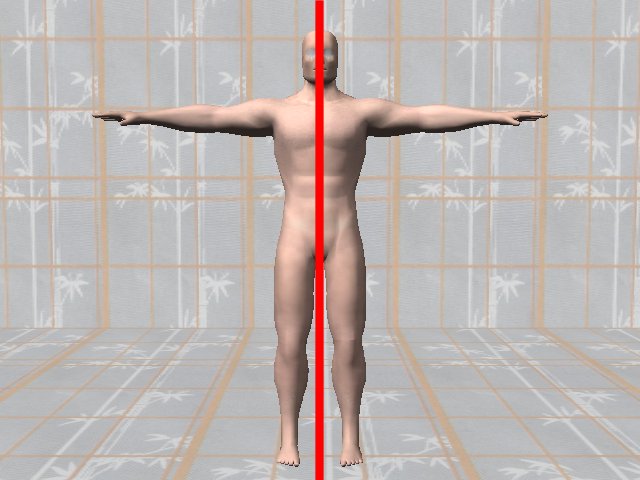 The centerline is just your body, your spine from your head down to your groin with your legs as the base that holds you up. it's you how you stay erect and its flexibility is what allows you to move your body.

(it can twist too)

In an MMA setting, this is your greatest strength and also your greatest weakness. All of your necessary organs and weak points are located along and near this line. 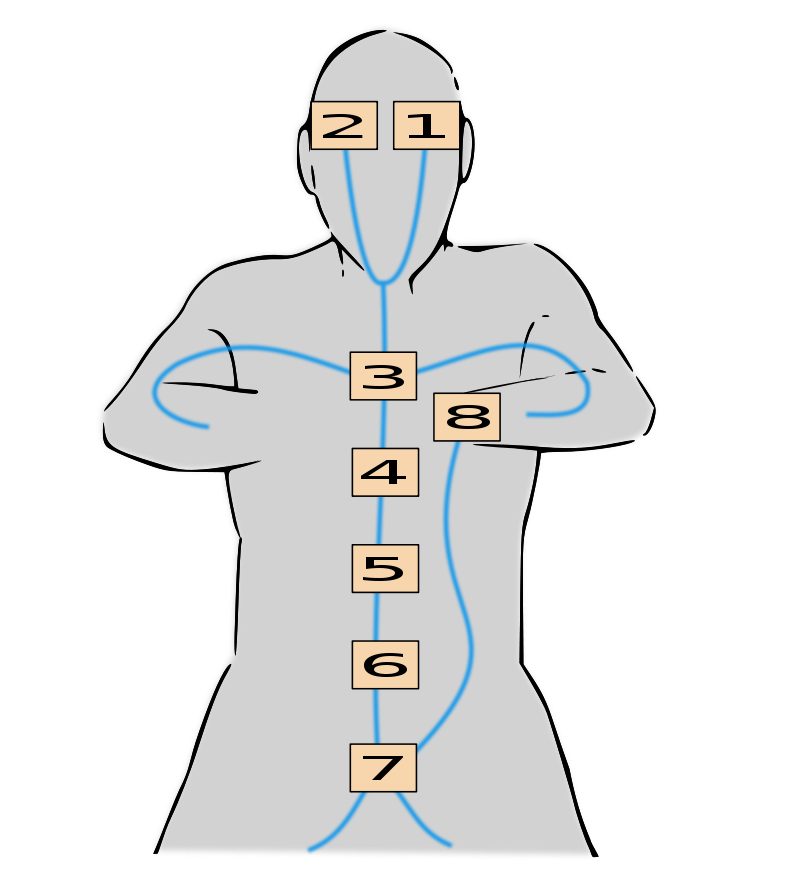 (chakra points for naruto fans or for realists the brain, the eyes, chin, neck, heart, solar plexus, liver, kidney, and groin are all weak points on the center line)

As you can see this position allows for good movement with balance and power. This positioning has a few benefits, it allows your centerline to subtly be further away than your opponent. This also adds variety and changes the capabilities of your lead side and rear side with your lead side closer to the opponent, able to land much soon than your rear hand. While the rear hand will always be the one with the most potential for power. It also means when fighting an opponent your movement plays with the distances between you and your opponents lead hand and rear hand.

While angles is a subject for another day, it is predicated on this positioning and moving around your opponents shoulderlines (i.e his stance and direction he's facing)

While Marvin graciously shows how to move, defend, and attack; Bruce Lee adds a few mantra's so one can win a fight.

Jack Slack has written some great articles on the centerline concept for striking. Be sure, to read some of his work. In the meantime, I will aim to make sense of it's uses in the 3 phases of combat.

3. Defend Your Centerline to remain in control of it, while simultaneously controlling the centerline of your opponent. (Striking)

There is a duality between defending your centerline and attacking. As any good brawl will show you, it's hard to do both...but, once you commit to controling your positioning and controling your opponents centerline, his ability to move, you are in effect free to attack with out consequence. This desire to have to have control for as long as you can is what seperates a quick streetfight from a high level match. Even boring fights are just 2 fighters never conceding control.

Just like the lion or tiger will attack from behind or surprise it prey and attack by the side. A strong and majestic animal that doesn't have to play it safe, consistently does. It is really is a much safer alternative than the brawls we are accustomed to. So just by moving outside of either of the oppenents legs(shoulderlines) you have done a good job defending your centerline and controlling the opponents. This forms the premise of angles, while i will delve into later.

(Holm always moving, her body, her centerline, rarely staying in front of Rousey, but holm always finds her mark. In final clip. Holms is behind Rousey. Rousey doesn't have enough time to respond and defend against the kick.)

Of course, as you step closer to your opponent, you will have to do a lot more defending....

While at a distance it is important to misdirect opponent, in close, you still should misdirect your opponent but now you have to physically move the person's centerline. This will be the theme of the article, as you get closer to your opponent you have apply more physicality to control his movements.

in following pic i've segmented the different parts of the centerline, There are the main target areas for ease when aiming as well critical areas that are sure to end a fight.

This chart isn't just for striking. Interestingly, one can hit all kinds of take downs and clinches along the centerline: say, a double colar tie or headgrab, a bodylock to the chest or torso, a double leg, single leg or low single. Switching it up and changing the side: front, back, left, right, really forces the opponent to work, which is a good thing.

To really complete a takedown, you have to have complete control of at least 2 sections of the centerline and you still have to force your opponent into a certain direction.

Edgar attempts single leg. Only able to control calf and unable to unbalance aldo, Edgar tries to switch to an upper body clinch, but, gets stiff armed.

Controlling a fighter opens up many takedowns, slams, and throws. However, there are other options... when a fighter is unable to completely control his opponent, grip fighting, stalling, and striking from the clinch takes precedence.

Even as McMann is flattened straight up against the fence. She defends against Rousey's throw. Rousey wisely uses that time to strike.

Anderson unable to physically control Weidman with Collar tie. As such Weidman is able to strike. Anderson's fight with Franklin is a good example of what you can do once you control your opponents centerline

Of course as watch fights you'll notice that some fighters greatly depend on taking a fighter down. Which would probably please Bruce Lee because as you take your opponent down, you greatly limit their ability to fight back...

2. Occupy the Centerline, to remain in control (Submission Grappling, BJJ)

Now in this stage you aren't just controlling the centerline; you are physically occupying it and restricting their movement. This is seen in bjj or the ground phase where one is stuck between a capable opponent ,and the ground, and sometimes the cage. 3D confinement lol.

Now it has to be said in high level grappling it isn't always apparent what the 2 competitors are trying to do. This is because, the sport is always evolving and frequently we see new techniques and new combinations but also because of the close space which grapplers operate and move. We can't always see the grips being attempted or predict the purpose of tumbling and placing of limbs.

Staying focused on the centerline is good fulcrum for watching what happens in this close space. For one, we know that whoever is on top has the advantage. Yes, the bottom player has a few counter strikes, a selection of subs, reversals, and escapes. However, the bottom is always considered part of the lower end of the position heirarchy. It is their best interest to stand, reverse to a top position, or end the fight quickly

Even in a civilian environment, the bottom person is stuck on the floor and his ability to move is greatly compromised. If its a thief he can be held down till an office shows up. Of course the reverse is true for the person on top. He can be stifled and trapped between the bottom player. As Anderson Silva is oft to do.

In conclusion, If you control your opponenet's centerline and protect your own you control the fight. Adding more control and occupying his space can only make a fight easier to win. Now that every fighter knows these tenets and are skilled in every phase we can watch true skill and strategy. The whole point of martial arts training is to drill the correct things to do under duress regardless of who is in control or not.Remember, every smart move and dumb move a fighter makes is his/her attempt to protect their centerline and attack their opponent. Next time you have to explain to your friend what's happening in a fight. Keep it simple tell them to keep their eye on the prize, on the centerline and everything will be clear shortly.

P.S. Next time we talk: we will look into the Spider's web and see how defense has grown over time.