In anticipation of the upcoming UFC Fight Night card, I decided to analyze Heather Jo Clark's performance in the Octagon in her last two bouts. In December of 2014, she fought and defeated Bec Rawlings in the TUF 20 Finale. She entered that fight knowing that she would have to have her left ACL reconstructed in the week following.

What immediately stood out to me was how Clark could not use the left leg effectively when pressuring Rawlings against the cage. In most of these instances during the fight, her right leg was providing the bulk of the force to hold Bec on the cage. In this screen capture from that fight, notice how Heather's left leg is in a flexed position, with very little weight on the leg, and the stronger right leg is positioned far behind her. This seemed to be the dominant position that she held when holding Bec on the cage at various points in the fight. 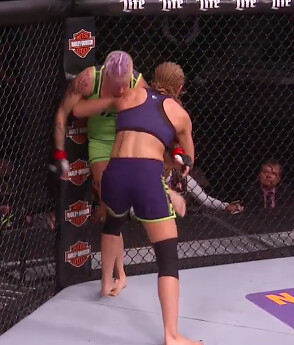 Heather probably used this position due to the feeling of instability in the knee if she placed force through the leg, which could cause an anterior (forward) shearing effect of the tibia at the knee in the absence of an ACL. At times during the bout, Heather was in a position where she briefly had to apply force through the left leg. She quickly shifted out of these positions, or disengaged from Bec entirely. The lack of stability in her left knee was also evident in the few ineffective takedowns she attempted. Those attempts were over almost as soon as they started.

Heather's first fight after the ACL repair was a different story. Although she lost that fight via unanimous decision to Karolina Kowalkiewicz, there was a big difference in her willingness to utilize the left leg. She was more active with kicks and demonstrated better use of the left leg for power when holding Karolina against the cage, as noted in the picture below. 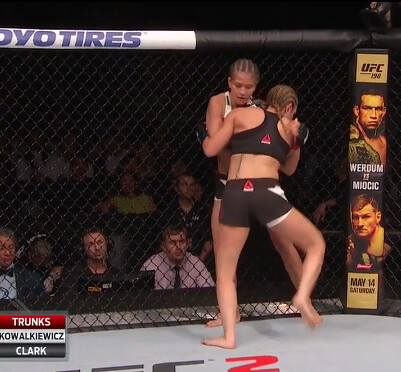 Here you can see that Heather has all of her weight on the left leg, and was utilizing the right leg for strikes in the clinch against the cage. This is something that just did not occur in the Bec Rawlings fight. Heather also seemed lighter on her feet in the first round, and was able to move in and out better when executing punches. She seemed to fade in the later part of the second round and for sure in the third round, and was taking a lot of punishment from Karolina. Her takedown attempts were lethargic in the latter two rounds, and she was not able to push through the attempts using the strength of her legs.

Heather will face off with Alexa Grasso in the opening bout on the main card of UFC Fight Night: Dos Anjos vs Ferguson, Saturday on FS1. Grasso is making her UFC debut, and she is prohibitive favorite over Clark. Grasso also has her own injury history. She was inactive from February of 2015 until July of 2016 while she recovered from shoulder surgery and a hand injury. While I am generally awful at predicting MMA fight outcomes, I do look for Clark to improve overall from her last fight. She will have had 6 more months of conditioning and strengthening, and more time to address the short duration, ballistic power needed in the legs to succeed with takedown attempts as well as aerobic conditioning in general. Clark also remarked on Instagram that the weight cut for this fight had been "the easiest of my life". These are all positives for someone 36 years of age, who I think needs a win tonight to make her case to stick around in the UFC organization.