Here's a different take on what's on the line at Dynamite! as we break down the MMA lineal title history behind this show. Check back tomorrow for part 2: the kickboxing titles of Dynamite!.

Hello fight fans! Fraser here welcoming you to the latest edition of our lineal title updates. In the spirit of Dynamite!, we're doing a two parter this week. Part one shines the spotlight on the MMA half of Dynamite!, while tomorrow's part two focuses on the kickboxing. Since the MMA lineal title hunt is not my speciality, I'll turn things over to Matt from here.

Matt here - great to be back ahead of a monumental co-promotional event between Bellator MMA and Glory Kickboxing. As I'm sure you've heard by now, the Dynamite! event on Spike TV this Saturday night will feature a mixture of MMA and kickboxing action. Not only does that sound awesome, it also sounds like a dynamite! excuse to offer up a two part lineal title feature. Twice the lineal goodness! You're welcome...let's get started.

First, a shameless plug. If you enjoy this kind of stuff, I recommend a quick search of my screen name in the Fan Post section. I've been tracking lineal MMA titles for 5 years now. The result is a massive spreadsheet that features 85 promotions, 442 lineal titles, and 151 active lineal champions across 13 weight classes (both men's and women's divisions). I am most proud of my new Lineal Timeline format. Here's a link to check out my article on the featherweight division.

Here's a quick look at the rules we follow when tracing these titles:

1. What is a lineal title, anyways!? The lineal championship of a weight class is a world championship title that exists only in theory, but represents an attempt at crowning one "true" champion.
2. A fighter can win the lineal championship only by defeating the reigning lineal champion in the ring or the cage. This fact distinguishes it from a conventional world title, which can also be stripped from the champion for business, contractual and/or promotional reasons. In a phrase, the lineal champion is "the man who beat the man"
3. My method of crowning a lineal champion is an aggregated approach. Unless specifically noted, each individual title traces back to the given promotion's inaugural champion. And, the fighter with the most combined titles at any given point in time is considered the "lineal king" of the division
4. Only bouts contested within the weight class for which the belt was created are counted in the lineage
5. If a title dead ends due to change of weight class or retirement, the next title issued by the promotion will be considered. Each issued title is referred to as an "iteration" of the belt (1st iteration, 2nd iterations, etc.)
6. No Contest rulings will be recognized across the board (i.e. Nick Diaz's win over Takanori Gomi does not affect the LW lineages)
7. TUF fights are exhibitions and will generally not count in the lineage of a title

This main event is surprisingly interesting from a lineal title perspective for two reasons. First, Liam McGeary will be putting his 4 lineal titles on the line. Here's a more detailed look in chronological order (bolding signifies that more titles were added to the lineage during that champion's reign)

Liam McGeary holds 10% of all active titles in the division. Here's how he stacks up with a division ruled by current lineal king Jon Jones: 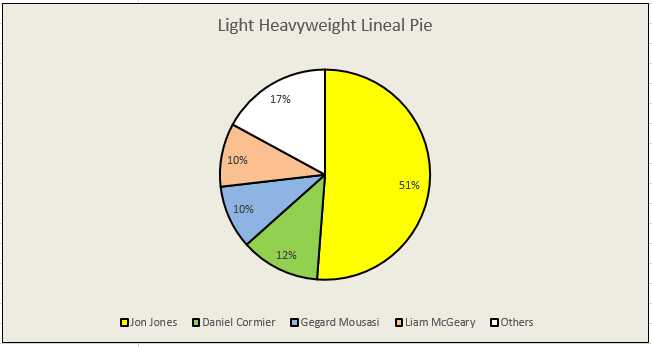 Cormier won his titles from Anthony Johnson while Gegard Mousasi remains a LHW champion despite competing most recently at 185 lbs. If he decides to remain at Middleweight for the long haul, his titles would need to be retired as there are no 2nd iterations for his belts.

What this all means is that in 2015 Tito Ortiz could actually hold 10% of the active lineal titles at Light Heavyweight. Pretty crazy....but that wasn't always the case.

Which brings us to the second reason why this main event is so interesting. In the year 2000, Tito Ortiz became the first Light Heavyweight fighter in history to unify 2 lineal titles. Let's take a walk down memory lane, shall we? It's 1999 and everyone is partying appropriately. Meanwhile, at IVC 10, Wanderlei Silva defeats Eugene Jackson and is crowned the first Light Heavyweight champion the sport of MMA has ever seen (Quick detour from our stroll. It's only fair to mention that in 1997 Shooto crowned Enson Inoue "Heavweight" champion, but the belt was contested between 200 and 220 lbs. So, while it's mostly true that IVC crowned the "first" LHW champion, the Shooto belt could also be considered a LHW title. The Shooto belt dead ends at Frank Shamrock who later unified it with the original UFC Middleweight title (199 lbs) before moving to 185 lbs in 2006 never to return). The IVC belt was contested under a modified rule set at 90 kg or about 199 lbs, but it's close enough to our modern day definition to recognize the accomplishment.

It's now the year 2000 and seeing as the world has failed to end, Tito Ortiz challenges Wanderlei Silva for the vacant UFC LHW title as scheduled. This fight takes place just 7 months after Tito failed to capture the title from Frank Shamrock as mentioned above. This time, Ortiz makes good on his opportunity and is crowned UFC champion while also taking the lineal IVC title from Wandy. For about 1 month, Tito holds 2 of just 3 LHW titles in existence (the third being Frank Shamrock's lineal UFC title as he had yet to move to 185 lbs. It's a bit confusing because we are looking at this title picture retrospectively). Later in 2000, Amar Suloev and Jim Theobald add to the lineal pie. In May, Suloev beats Semenov in the finals of the inaugural World Vale Tudo LHW tournament while Theobald wins a one-night tournament to secure the inaugural Ironheart Crown LHW title.

To help us visualize the title picture in 2000, here's a look at the Light Heavyweight Lineal Pie at years end: 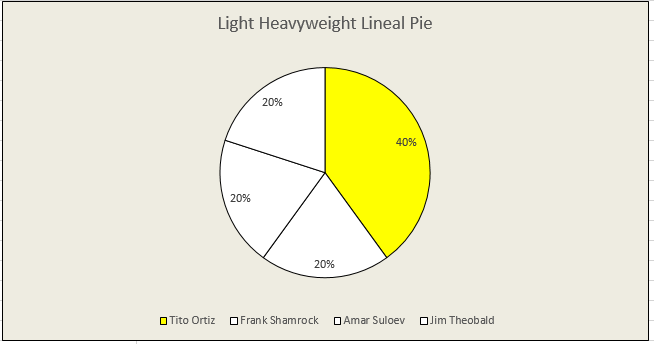 As mentioned above, Frank Shamrock's first iteration UFC title dead ends when he makes the jump down to 185 lbs, but all the others eventually find their way to the current lineal king Jon Jones:

Of the four men competing in the one-night-tournament, 3 have a history of lineal title success. We've already touched on the 3 titles that Emanuel Newton once held as they are now the property of Liam McGeary. You may have also noticed that King Mo makes a guest appearance in the Shark Fights lineage.

In addition, King Mo and Phil Davis are former lineal Strikeforce LHW champions. Here's a look at the details.

Also on the card are Paul "Semtex" Daley in a Glory kickboxing bout and Josh "The Punk" Thomson who is making his Bellator MMA debut. They've each enjoyed significant lineal title success in the past.

We hope you've enjoyed Part 1 of this 2 part series. Check back tomorrow for the thrilling conclusion when we examine the lineal Kickboxing titles on the line at Saturday's Dynamite! event.