After another masterful performance by bantamweight champ TJ Dillashaw the fight community has been collectively pontificating about a dream match-up with the oft-injured former champion Dominick Cruz. The Dominator hasn’t lost a fight since ‘07, yet was stripped of his title due to his inability to defend his crown. Like many of the sports most dynamic athletes, Cruz deals with more than his fair share of injuries. His style is predicated on constant directional changes and a near frantic pace, and has apparently been hell on his ACLs. That being said, knock on wood, Cruz may be ready to make his second octagon appearance in four years if his rehab goes well and he avoids camp injuries. The UFC hasn’t confirmed his opponent, but the writing certainly appears to be on the wall. 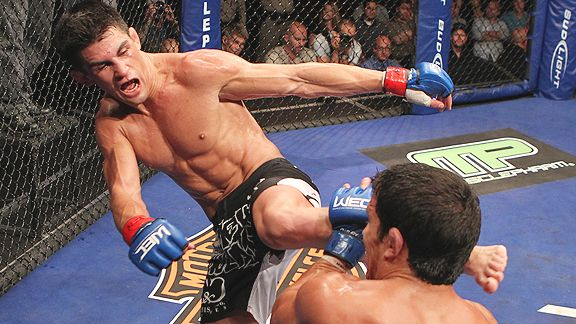 A match with TJ makes sense stylistically, from an entertainment standpoint, and dramatically due to the longtime rivalry between Cruz and Dillashaw’s Team Alpha Male. In four fights against Alpha Male fighters, 2 apiece with team founder Uriah Faber and current #2 ranked UFC flyweight Joseph Benavidez, Cruz is 3-1. In the first of these bouts Faber caught him in a guillotine, handing Dominick his only career loss. The other three fights were closely contested Cruz wins, two of which were named ‘fight of the night’ and the other a split decision victory. Cruz’s high fight IQ was on full display in these contests. He kept his strike output high enough to overcome the sometimes effective counter-punching of the TAM fighters, at least in most of the judge’s eyes. He has an uncanny ability to land takedowns to secure rounds, even against top level wrestlers. Since ‘07, no one has puzzled out how to defeat The Dominator, with his wicked pace and elite takedown game. 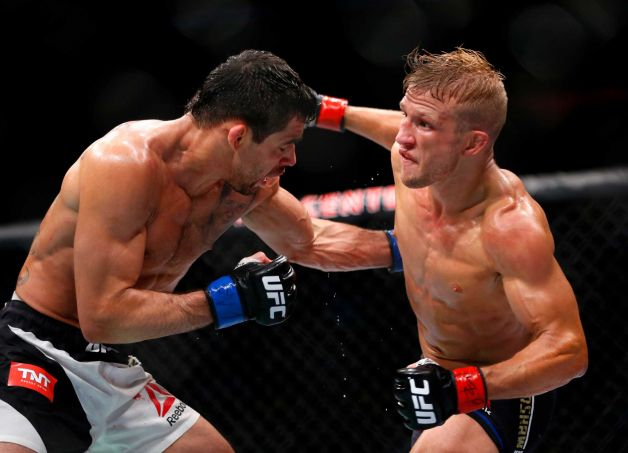 Much has been made of the style similarities between these two fighters, but under closer examination they’re quite different, and so are the results produced. While Cruz is the master at finding a way to win on the scorecards, champion TJ Dillashaw usually renders them inconsequential. He has 6 finishes in his eight UFC wins, and would have seven if not for Mike Easton’s incredible toughness. He throws almost every technique with power, while Cruz rarely does. Cruz is an out-fighter, and is most effective darting in range with a pot-shot or 1-2 lowkick combo, for instance, on his way through the pocket and back out of range. Unless he’s convinced that his stand up acumen is vastly ahead of his opponents, like in the Jorgeson fight, he hardly ever ‘sits down’ on his shots, preferring to limit his exposure to counters. When an opponent has success timing his entries, like the TAM fighters did at times with hooks or crosses, he tends to change tact and take it to the ground. Dillashaw has more balance in his striking game, able to begin his attack at range with a combo, bait counters and slip, and ‘sit down’ on his own strike. Unlike Cruz, he’s completely comfortable in the pocket. He shoulder rolls and blocks counter strikes with his off hand instinctively. His MMA wrestling has been elite. He’s given up no takedowns in the UFC according to Fightmetrics ( Barao did take him down in their last fight briefly though). He often stands with his shoulders out over his lead foot with his knees bent, putting him in perfect sprawl position. I don’t like Dominick’s chances of creating a ground war if the stand up battles don’t go his way.

Dominick Cruz was a great champion in his time, with a game that had the rest of the pack chasing him. Attentive MMA fans know that the game is always evolving, and TJ Dillashaw is the current manifestation of that process. Cruz’s injuries not only robbed him of his title, but also of his development as a fighter. Hopefully he proves me wrong and gives the champ all he can handle, putting on a show for the ages, but I see Dillashaw acing this test.