Hello there lineal title fans! Welcome to the final chapter of this two part saga. If you missed the lineal lunch break from yesterday, here's a link to Part 1. Or, if you're one of those terrible people that just skips right to the last page of a book because "who has the time," here's the cliff notes version:

- The first Featherweight title is created the same year that Sinead O'Connor's "Nothing Compares 2 U" goes to number one (coincidence?)

- Then we sit around for 10 years waiting for something to happen, mostly watching "The Fresh Prince of Bel-Air" until 1996 and then switching over to the first couple seasons of HBO's "Oz" to pass the time (before it got weird)

- When the 2000s finally arrived, some guy named David Velasquez (?) won the first two new titles. Then Hatsu Hioki kicked ass in Japan and made us all shed a tear for the days when he was freaking awesome

- Finally, California Boy stepped in and started snatching up lineal titles like they were going out of style. However, as Lyoto taught us, Eras don't last forever. So, as we left our heroes, Mike Brown was the lineal king and looking pretty unstoppable

- Fernandes won the Dream tournament to earn the inaugural title and in the process unified the belt with 2 other titles. See details below

- Brad Pickett became the first ever UCMMA Featherweight champion in 2009, then known as the UCUK Featherweight title. This lineage is retired, however, as Pickett signed with the WEC for his very next fight and moved down a weight class to Bantamweight without ever losing the title

- Already the Ironheart Crown champion from his win over Joe Warren earlier in the tournament, Fernandes unifies Takaya’s Cage Warriors title while also creating a new lineal title as the Dream tournament champion

- In the process, Fernandes solidifies a new secondary lineage

- Fabiano puts his IFL title, introduced in 2007, together with Paixao’s Deep belt from 2005

- Brown successfully adds the TKO and Shooto Americas titles to the dominant lineage, bringing his total to 7 out of a possible 27 or 26%

- Scarface emerges! With the win, Aldo claims the lineal crown and successfully unifies the original Shooto championship from 1990 with the dominate lineage 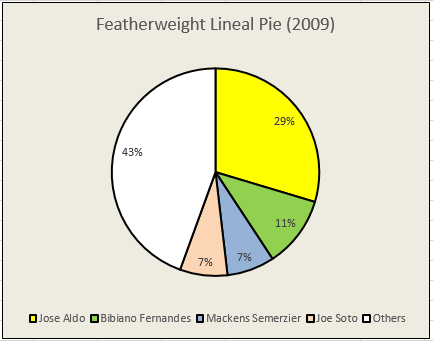 - This marks the re-emergence of Japanese stand out Hatsu Hioki who, at this point in the timeline, holds the 2nd most dominant lineage with 4 of 34 titles or 12% unification

- Combined, Japanese fighters Hioki and Takaya hold 21% of the Featherweight lineal pie. Pretty impressive if you consider that lineal king Jose Aldo holds just 26% of all possible titles in the weight class

- Already the lineal Ring of Fire champion from 2009, Toner unifies it with the Icon Sport title with this his win over Visher

- With his first defense of his WEC title, Aldo successfully adds the Ring of Combat title to the dominant lineage at Featherweight 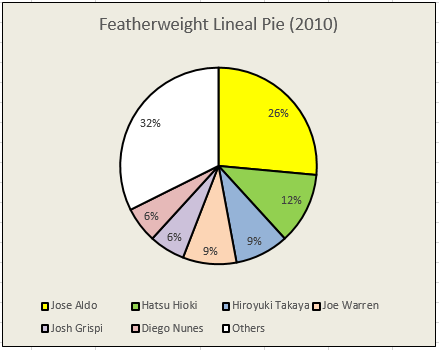 2011 – And the NEW UFC Featherweight Champion of the World…

- After acquiring the WEC, the UFC finally brings the Featherweight division over to the big show. Aldo cements his position as champion of the newly minted weight class with a win over Mark Hominick, in the process, retaining his lineal crown and adding the UFC title to the lineage 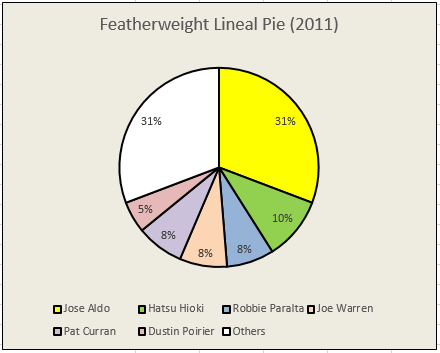 - This moment in time represents Hioki’s peak. He would later drop these titles in his next UFC bout against Ricardo Lamas, setting up a unification bout with Jose Aldo in 2014. See details below

- Aldo adds the Deep and IFL titles to the dominant lineage 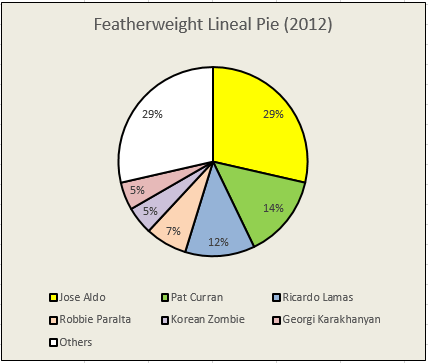 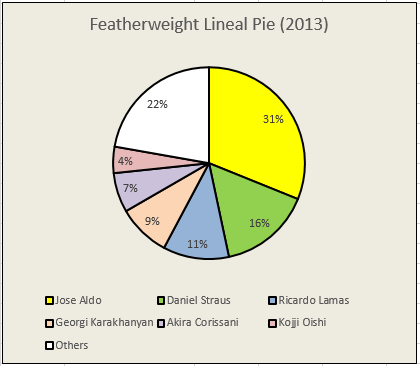 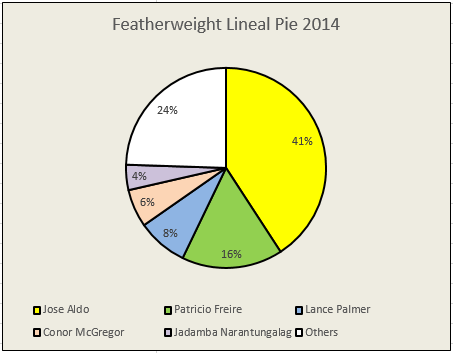 2015 – Conor McGregor vs Chad Mendes and Beyond… 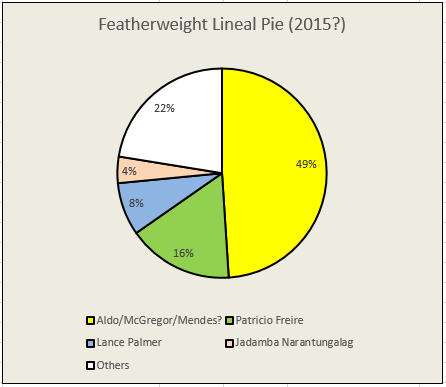 If this unification match occurs, the winner would hold 24 lineal titles, vaulting them ahead of Jon Jones (21 titles) for 4th place across all weight classes on the Lineal Leaderboard (Details below).

Minor FW Lineages to Keep an Eye on:

- Luis Palomino, Joe Soto, Joe Warren, Pat Curran, and Patricio Freire were all involved in the unification of these lineal titles

- Georgi Karakhanyan single-handedly unified all of these lineal titles

I hope you enjoyed this 25 year journey through the lineal Featherweight timeline. I look forward to your feedback on the new format. (Laughed? Cried? Fell asleep?) Enjoy the fights!