Hello there lineal title fans! Okay, so now we know that the greatest ever UFC event EVER (!!!) in UFC history (!!!) featuring the greatest match up in UFC history…ever (!!!) is not going to happen as originally planned…bummer. However, there is some good news. The new main event between Conor McGregor and Chad Mendes still features some lineal title unification action. Jose Aldo is the current lineal king at Featherweight with 20 titles to his name, good for 41% unification and a tie with Ronda Rousey in 5th place across all weight classes on the Lineal title leaderboard. Conor McGregor currently holds 3 titles (Ironheart Crown, Cage Warriors, and Dream) and Chad Mendes brings the lineal Legacy FC Featherweight title to the party. The winner at UFC 189 will likely have a chance to unify 4 titles with Jose Aldo’s already impressive collection.

I’ve been tracking these titles for a few years now, so I feel like I’ve given you most of this information already. For this reason, I want to switch things up a bit. Instead of a big data dump of promotions and names, I’m kicking off a new concept I like to call the "Lineal Timeline." The data has been fun to look at for a while now, but I feel like it’s the story-lines behind the titles that make these lineages interesting (even downright educational). I’ll break down the "Lineal Timeline" by starting at the earliest active title and taking a chronological journey through the lineage. I will make note of relevant titles installed each year and highlight all lineal unification matches along the way, until we arrive at the current champion (in this case Jose Aldo). One of the benefits of this method is that the lineages will be revealed a little at a time so that each individual title’s place in history can be appreciated in context. I really hope you enjoy this new format and I’m excited for your feedback.

Before we jump into the details, here’s a quick reminder of the rules that I follow when tracing these lineages:

1. What is a lineal title, anyways!? The lineal championship of a weight class is a world championship title that exists only in theory, but represents an attempt at crowning one "true" champion.
2. A fighter can win the lineal championship only by defeating the reigning lineal champion in the ring or the cage. This fact distinguishes it from a conventional world title, which can also be stripped from the champion for business, contractual and/or promotional reasons. In a phrase, the lineal champion is "the man who beat the man"
3. My method of crowning a lineal champion is an aggregated approach. Unless specifically noted, each individual title traces back to the given promotion's inaugural champion. And, the fighter with the most combined titles at any given point in time is considered the "lineal king" of the division
4. Only bouts contested within the weight class for which the belt was created are counted in the lineage
5. If a title dead ends due to change of weight class or retirement, the next title issued by the promotion will be considered. Each issued title is referred to as an "iteration" of the belt (1st iteration, 2nd iterations, etc.)
6. No Contest rulings will be recognized across the board (i.e. Nick Diaz's win over Takanori Gomi does not affect the LW lineages)
7. TUF fights are exhibitions and will generally not count in the lineage of a title

The timeline will be organized by year, starting with the creation of the first active title. I’ll move forward year by year to introduce any titles that are created relevant to the lineage and highlight the lineal unification matches along the way. Once a lineage is brought fully up-to-date, I'll present it in it's entirety. For emphasis, I have bolded each change of champion that resulted in the unification of additional titles in these "finalized" lineages.

- This represents the oldest active lineal title across any weight class. In fact, it was created before weight classes were truly established, so not all of the contests took place under the generally recognized Featherweight limit of 145 lbs. Hell, even the rule set was different way back then. However, the Shooto belt has followed the path of a traditional FW title and it’s a fun place to begin

- The Unified Rules were only just finalized in 2000, so although this title was contested at 145 lbs, it was referred to as Bantamweight when first installed

- After a failed attempt at revenge against Valencia, Velasquez again finds gold becoming the first fighter in the history of the division to hold titles from two different promotions, but still no unification

- The 2nd iteration was created in 2006 and is still active today. See details below

- McVeigh held the Cage Warriors Featherweight and Bantamweight titles simultaneously. In each case he was the inaugural champion

- This captures a moment in Pulver’s career, after his first run with the UFC, when he was competing at Featherweight for the International Fighting Championship and later for Shooto in Japan. The eventual lineage ignores his losses at 160 lbs in PRIDE and later 155 lbs for the UFC. I’ll touch on these details more when the title finally passes to Faber in 2008

- Wagnney Fabiano held the UCC "Featherweight" title from TKO 1, but that title was installed in 2000, before the finalization of the Unified Rules, and was contested at 155 lbs

- Curran becomes just the second fighter at 145 lbs to appear in more than one lineage. Like, David Velasquez, however, Curran was not able to unify any titles as he won the Shooto Americas championship after dropping the lineal Ironheart Crown title to Kid Yamamoto

- The 2nd iteration was created in 2007 and is still active today. See details below

- This final title, installed in December of 2005 brings the total of active titles in the weight class at this particular moment in the timeline to 12

- With no unification matches in this 5 years stretch, there are 12 different fighters walking around that could call themselves "Featherweight Champion of the World"….but that’s about to change

- This represents the currently active version of Shooto PR. The first iteration was retired when Gilbert Melendez moved to LW in 2006 after defeating the inaugural champion Sato

- The 2nd iteration was also retired – Retired Lineage: Noah Thomas (2009: Signed with UFC and moved to BW later that year)

- The 3rd iteration was created in 2009 and is still active today. See details below

- This title was installed as a result of an 8-man tournament. Cage Force, an off-shoot of GCM (also known for the women’s promotion Valkyrie), was the first Japanese promotion to hold MMA contests exclusively in a cage instead of the ring traditionally used by Pride FC, Shooto, and Deep

- Hoshino defeated Antonio Carvalho, Takeshi Yamazaki, and Akiyo Nishiura over the course of 6 months and 3 events to win the first and only Cage Force Featherweight title

- The 2nd iteration was created in 2009 and is still active today. See details below

- Although not a true unification match due to the fact that Escovedo had previously dropped the lineal WEC title to Bao Quach, this fight did set up a 2nd iteration of the belt and laid the ground work for Faber’s reign as the first lineal king of the Featherweight division. As you will see below, Faber would later unify this title with the KOTC, SportFight, Pancrase, and IFC belts

- After defeating Mark Hominick earlier in the year for the TKO title, Hioki unifies it with the Shooto Americas belt with this win over Jeff Curran

- This creates a very brief tie with Faber for two lineal titles, but just two weeks after Hioki’s win, Faber adds a third belt and solidifies himself as the lineal king

- Faber adds the SportFight title to the dominant lineage

- Faber adds the Pancrase title to the dominant lineage

- Faber adds the IFC title to the dominant lineage

- As mentioned above, this period of time represents Pulver’s return to the 145 lb division in the WEC after a stretch in Pride FC and UFC fighting at 160 lbs and 155 lbs respectively

- At this point, Faber reaches his peak as lineal king capturing 5 of a possible 21 titles. Leonard Garcia is the only other fighter to hold more than 1 title with 2 of 21. These titles were passed to Garcia as follows: Hatsu Hioki → Antonio Carvalho → Hiroyuki Takaya → Leonard Garcia

- Not a true unification match, but noteworthy in that Faber loses his 5 titles along with the lineal featherweight crown. The Faber Era is over

- This win for Brown also sets up a unification match with Leonard Garcia, which I will detail in the next section as the fight doesn’t take place until 2009

- Remember this title from the very beginning of the timeline? Aldo finally wins it from Nogueira 19 years after it was first installed. While not a true unification bout, the win does put Aldo in position to unify the belt with the dominant lineage held by lineal king Mike Brown

- While he was champion, Nogueira moved up to 154 lbs to compete in K-1 Hero's (where he lost to both Tokoro and Boku) before dropping back down and losing to Jose Aldo in the WEC at 145 lbs

2006 is significant in that it is the first year in which two or more fighters lay claim to multiple lineal titles. For this reason, it's a great place to begin visualizing the bigger picture of the Featherweight division with a lineal pie (mmmmm....lineal pie!). It's important to note that, while titles can change hands more frequently, these charts capture a moment in time at the end of each calendar year. 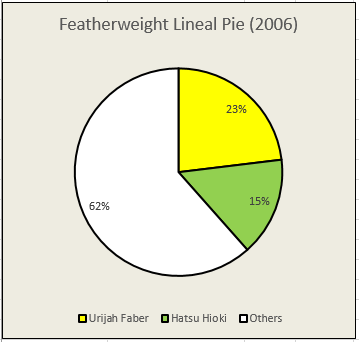 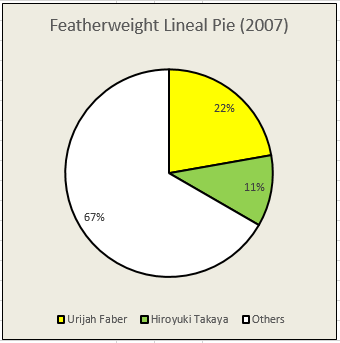 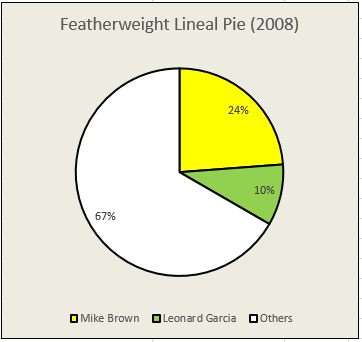 And now for the cliff hanger....

That about does it for Part 1. So far, we've gotten a nice picture of what the division was like before Jose Aldo. Urijah Faber (or 'California Boy' as my wife calls him) was a dominant force and I hope that this lineal title data helps us all to appreciate his legacy just a little bit more.

Tomorrow, join me again around lunch time for the final chapter in this two part saga:

- Japan makes a run at the crown

- The UFC gets into the Featherweight business