Why is this titled "Gracie Era", and not "Royce Gracie Era"?

Because what Royce Gracie did in 1993-1995, that was the Gracie family effort.

Ever since Rorion Gracie moved to the America in the early 1980’s, he had a dream of bringing Vale Tudo fights to mainstream America in order to promote Gracie Jiu Jitsu.

In 1993, Royce wasn't even the best of the Gracies. He was just selected to represent family.

I don't want to repeat the story that was told so many times, so let me start with some rankings and numbers.

Early days - MMA in 1993 through the numbers and rankings

As I mentioned in that previous post, all fighters in the open-weight era (1993 - 1996) were divided into two weight categories:

In the first quarter of 1994, Royce increased his win streak to 7 and was dominant at the top of P4P ranking. 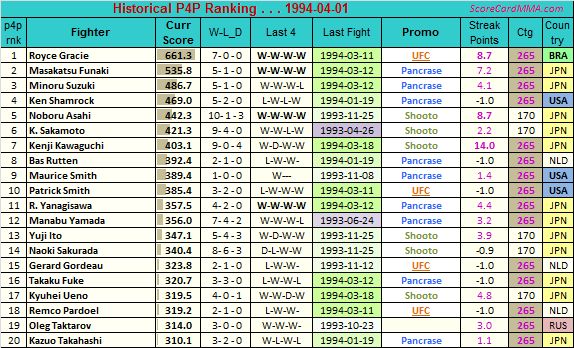 At that time some people thought he has some kind of Brazilian magic, that made much bigger guys feeble.

Following graph shows how dominant Royce was in terms of Current Score points: 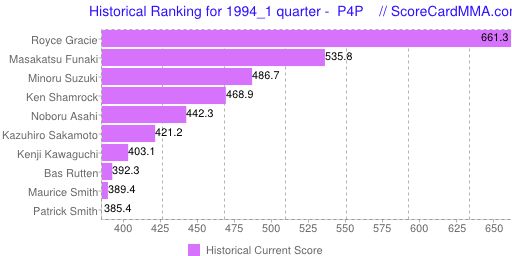 Masakatsu Funaki had two impressive wins (Bas Rutten and Vernon White) and that made him #2 P4P in 1994Q1. He kept that #2 spot for the next two quarters. In Q2 he added two more wins, but that was against much lower ranked opponents - so his score slightly decreased. 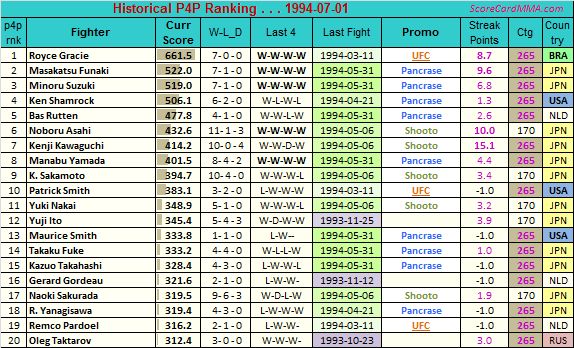 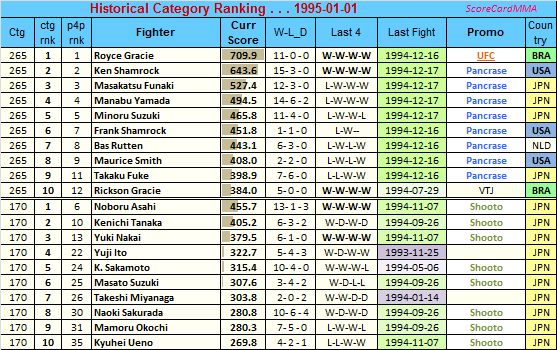 In LW Shooto is still dominant and top 10 are all Japanese fighters.

Following graph shows how much stronger is HW division (fighters over 170 lb) than LW at the end of 1994.

Both divisions still have very few good fighters. In 1994 ScoreCardMMA has 48 ranked HW and 32 ranked LW . That is why Quantity index is so low. But Quality (TopFighters) is mostly in the HW division.

At this time we have several MMA Promotions and most of the top promotions are in Japan:

Pancrase had 10 events in 2014 and 3 in the last quarter. They used 23 different ranked fighters.

Royce Gracie was a dominant fighter in 1994/1995. At #2 P4P we had two fighters: Ken Shamrock and Masakatsu Funaki.

Here is how Current Score for those 3 was changing on a quarterly basis: 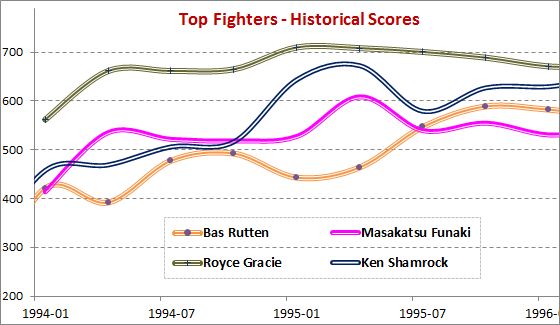 I included Bas Rutten because in this period he was ranked form #3 to #6. And he is a future #1.

At the top of HW division we have same names as before. But Royce now look less dominant than in the previous quarters.

Ken Shamrock (after that Draw with Royce at UFC 5) is much closer (look at Current Score points). He would be even closer if he didn't have that loss to Minoru Suzuki. Many people think that was another Fake fight. Ken was no longer on good terms with Pancrase. But they required him to return to Japan to defend his title.

A month before that title fight (Ken - Suzuki in May 1995), Frank Shamrock submitted Suzuki. It is weird that someone gets a title fight after a loss. But then, Suzuki was a co-owner. Suzuki had that title for a very short time. In Sep 1995, he lost that Pancrease title after Bas Rutten put him into Guillotine Choke. If it wasn't for that dubious loss, Ken Shamrock would be on a huge win streak (11 wins and 2 draws).

Now we have 2 Russians in the top 10 HW: Oleg Taktarov and Mikhail Ilyukhin 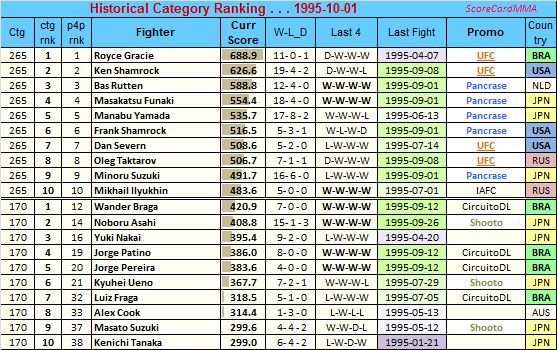 Big changes in the Lightweights. For the first time we have non-Japanese on the top.

Wander Braga won 3 tournaments in a row and defeated Luiz Fraga. This was enough to dethrone Asahi from LW top spot.

In 1995 we have increased number of MMA relevant countries. Here is the top 7 MMA Country ranking at the end of 1995:

Japan is no longer leading MMA country. America, Brazil and Japan are almost tied in 1995 Q3/Q4. Now America has the most active fighters and Brazil has top fighters.

Following graph shows how Country MMA Score was changing for the top 5 Countries: 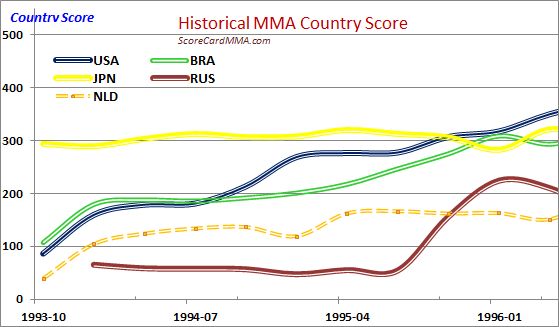 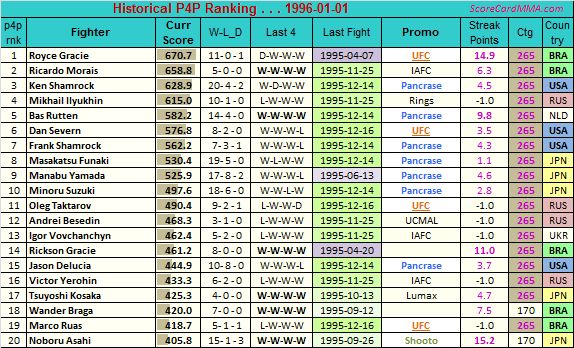 Let's now review the MMA Promotion rankings in this period.

At the end of 1994 we had just a few MMA promotions. Pancrase was at the top and they were closely followed by UFC and Shooto.

At the end of 1995 we have following situation:

Following graph shows how promotion Score was changing for top MMA organizations in that period: 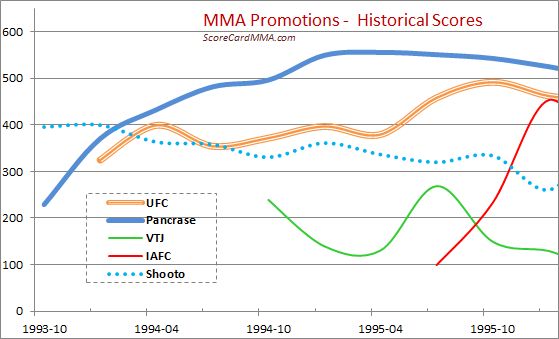 IAFC - Absolute Fighting Championship 1 is by far the best event from that period. It is interesting to see so many events with 100% finish rate.

So, why was "IAFC - Absolute Fighting Championship 1" so great?