Hello there lineal title fans! We are back for the exciting conclusion to the Women's Bantamweight Lineal Timeline. This is, of course, all in anticipation of Rousey vs Holm live on PPV this Saturday night. The stakes are high with 25 lineal titles on the line.

If you missed Part I of this article, here's a link.

When we last left our heroins, Yabushita was crowned new lineal Queen after her victory in the 2004 Remix tournament that saw her nab 7 of a possible 8 titles...

From 2005 to 2009, LaRosa had one of the most impressive runs by any lineal King or Queen in history. All told, she held the crown for 5 years and 2 months, defending it an incredible 12 times. Her reign is second only to Fedor who held the Heavyweight crown for 7 years and 1 month, defending it 18 times in that span.

It's interesting to note that Gina Carano's entire career transpired during this time period. Unfortunately, she is only represented in a lineage once when she defeats Rosi Sexton for the Cage Warriors title. The reason for this is related to the fact that she competed mostly in showcase fights contested at a catchweight. She also competed against Cyborg in a losing effort for the Strikeforce title in what would be the final fight of her career. Although not reflected in the lineage, Carano did enjoy success against former lineal title holders like Julie Kedzie, Tonya Evinger, and Kelly Kobold.

- Migrates to Featherweight in 2006 when Sexton loses to Gina Carano

- This is the 2nd iteration to D'Auguste's retired Smackgirl title

- This title eventually migrates to the 135 lb division, but not until 2013. It won't effect the lineal pie until then

- This was a one-time event featuring a one night 8-women tournament. Participants included Marloes Coenen and Megumi Yabushita

- This title was originally created in the Bantamweight division, but it will migrate to Featherweight further down the timeline when Modafferi loses to Coenen in 2009 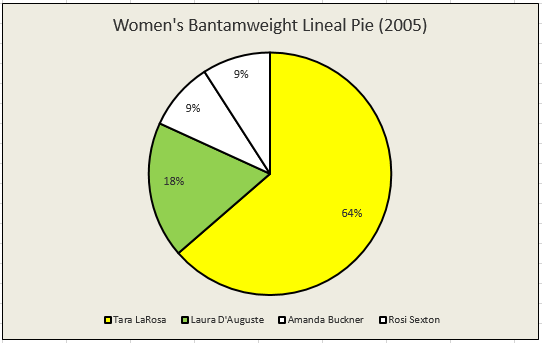 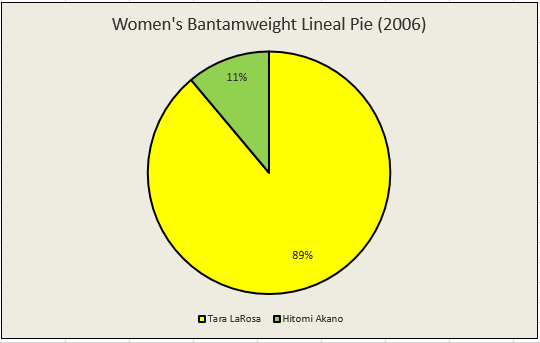 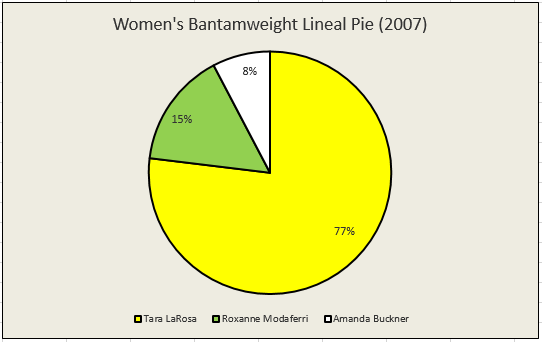 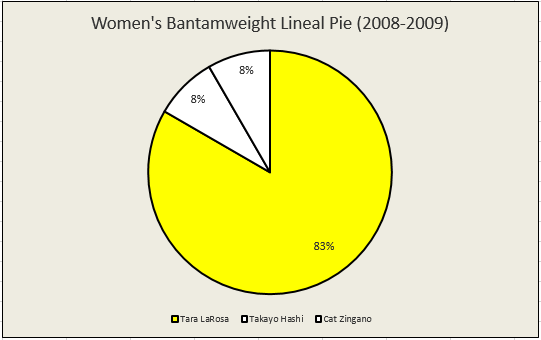 This time period is perhaps most notable as the calm before the Rousey storm. While Ronda technically debuted in 2011, Ronda was still getting her feet under her at this point. Cyborg, on the other hand, was already a reigning Strikeforce champion from her 2009 victory over superstar Gina Carano and was looking unstoppable. That is until she failed a drug test at the tail end of 2011.

Meanwhile, in Japan, Rin Nakai begins what will become an impressive run of 16 straight victories to start her career, collecting 3 lineal titles along the way.

- Frausto won a Bellator tournament as a huge underdog in a field that included Fujii, Esparza, Aguilar, and Penne. To date, it is the most stacked tournament in Strawweight history. She even has to pull an upset over Rosi Sexton to qualify for the tournament. She would later lose at 125 lbs to Jessica Eye and the title migrates to the BW division when Eye moves to the UFC

10 Years after her Remix World Cup victory, Coenen is once again the lineal Queen of the division! 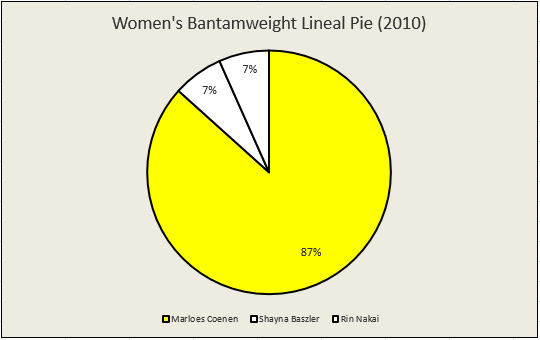 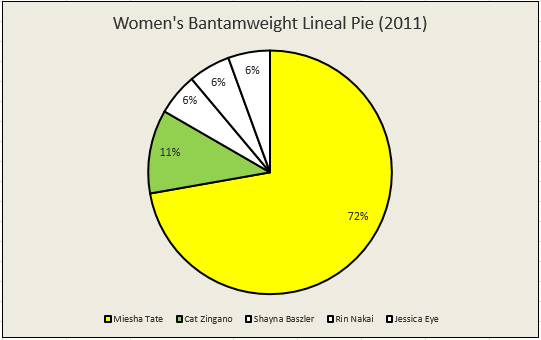 Here's where the fun really begins. It's 2012, and Rousey is coming off a dominant win over Miesha Tate in Strikeforce for the lineal crown. And, it's this performance that inspires the UFC to change their minds on accepting woman into the UFC.

Elsewhere, Rin Nakai continues her own brand of dominance in Japan. 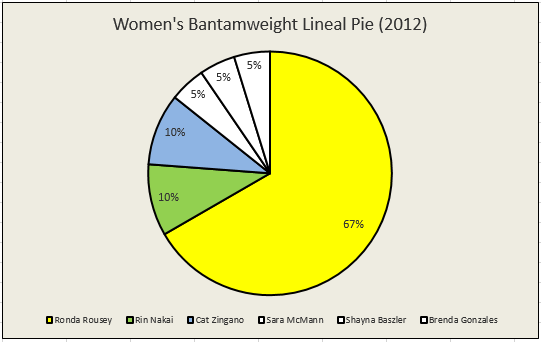 This period of our timeline highlights the dominance of Ronda Rousey. In this three year stretch, Ronda has added 8 titles to the lineage while defending her crown 4 times. And, with the year not yet over, Rousey has a chance to add 3 more titles and another defense of her crown with a win over Holly Holm.

- With this win, Cyborg brings her collection of titles to 5 and maintains 100% unification over the FW divsion

- Excluding her 1 year suspension, Cyborg's reign has lasted over 3 and a half years and 6 defenses

Titles Outside the Dominant Lineage: 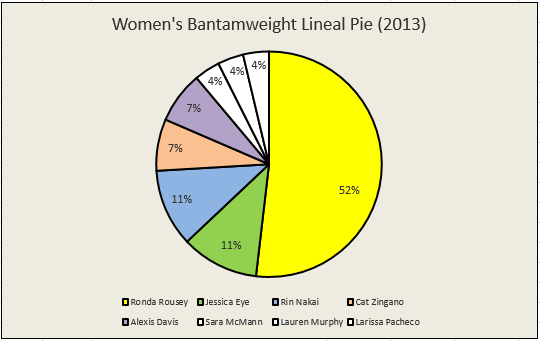 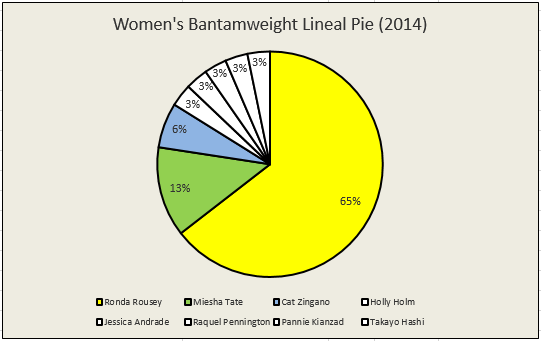 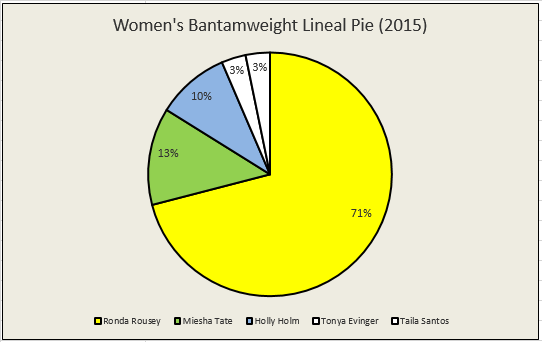 We can see here that the winner of Saturday's contest will secure 81% of the lineal pie. We can extrapolate further that Miesha Tate will likely either fight the winner or lose to a contender that would then receive a title shot. It's very likely that in 2016, the division will be closer to total unification than ever in history. It's an exciting time to be a WMMA fan.