Hello there lineal title fans! It's been too long my friends. But, there's no way I'd let an Australian stadium show featuring Ronda Rousey in a lineal unification bout pass us by without a closer look. The winner of Rousey - Holm will boast 25 of a possible 31 lineal titles in the division. That would be good for 81% unification and 4th place on the Lineal Leaderboard just above Jon Jones (21).

I’ve been tracking these titles for a few years now, so I feel like I’ve given you most of this information already. For this reason, I want to switch things up a bit. Instead of a big data dump of promotions and names, I kicked off a new concept last time which I'm calling the "Lineal Timeline." The first installment featured the men's Featherweight division (145 lbs), If you missed it, check out these links to Part I and Part II...we'll wait while you get caught up...

...Aaaaand, we're back...I'm excited about this new format because it features the story-lines behind the titles, which is what makes these lineages interesting (even downright educational). I’ll break down the "Lineal Timeline" by starting at the earliest active title and taking a chronological journey through the lineage. I will make note of relevant titles installed each year and highlight all lineal unification matches along the way, until we arrive at the current lineal champion (in this case Ronda Rousey). One of the benefits of this method is that the lineages will be revealed a little at a time so that each individual title’s place in history can be appreciated in context. I really hope you continue to enjoy this new format and I’m excited for your feedback.

Before we jump into the details, here’s a quick reminder of the rules that I follow when tracing these lineages:

The timeline will be organized by year, starting with the creation of the first WMMA title. I’ll move forward year by year to introduce any titles that are created relevant to the lineage and highlight the lineal unification matches along the way. Once a lineage is brought fully up-to-date, I'll present it in it's entirety. For emphasis, I have bolded each change of champion that resulted in the unification of additional titles in these "finalized" lineages. For fun, I've also included Featherweight titles that have remained in the 145 lb division (all of which are the property of Cyborg). These won't effect the Bantamweight lineal pie, but they do represent a potential unification opportunity if Rousey - Cyborg ever happens.

- It is July 18th, 1995, and Ladies Legends Pro Wrestling holds the first ever all women's MMA tournament in Tokyo, Japan. There is no weight limit for the tournament, evidenced by the eventual winner Russian Svetlana Goundarenko who tips the scales at 330 lbs

- The event takes place just two years after UFC 1 and it is clearly inspired by the Ultimate Fighting Championships. The fights are contested in a cage, have no time limits, and feature women from various combat sports backgrounds

Here's a look at the 8-woman field that started it all:

As you can see above, a number of the women who enjoyed some success in the tournament went on to compete in subsequent MMA contests. In fact, we will run across a few of these names later in the timeline.

- It's about 1 year after L-1, and All Japan Women's Professional Wrestling (AJWPW) has decided to get into the WMMA business with their first 8-woman tournament featuring Yumiko Hotta from last year and an otherwise new cast of characters.

- This was referred to as a Super Heavyweight title as Levi continued the early trend of large imposing woman in WMMA. She stood 6 feet tall 215 lbs

- The championship bout was the co-main event of IFC 4 held in New York at an Indian casino. This makes the IFC the first women's championship created and won on US soil. Her debuting opponent Betty Fagan weighed in at an equally imposing 238 lbs and never competed in MMA again

- Becky was an accomplished athlete even before trying her hand at MMA. She was a Judo black belt, a champion weight lifter, and an Olympic alternate in the Discus

- Howe was a true pioneer of the sport. Her professional career began in 1998, which was actually a bit earlier than most of the other female fighters that you probably think of as the "trailblazers." For comparison, here's a look at some of the most notable women fighters from the early days along with the year they made their pro debuts:

As the 90s come to a close, there have been 4 WMMA champions crowned in the US and Japan combined, but no unification matches. It's also notable that none of the tournaments or title matches actually pit the best women in the world against one another. But that's about to change...

- It's the year 2000 and the new century starts off with a bang as Neo Women's Pro Wrestling organizes a tournament to showcase many of the best athletes in women's MMA. The impressive list of competitors include: eventual champion Marloes Coenen, former L-1 champion Svetlana Goundarenko, IFC Champ Becky Levi, U-Tournament champ Irina Rodina, and 132 lb Japanese dynamo Megumi Yabushita who served as the Royce Gracie of the tournament, an undersized competitor among giants

- Kanodori avenged her loss in the finals of the U-Top tournament and claimed the lineal title from Svetlana in 1998. Kandori had her last fight in 2000, a win over L-1 and U-top contender Yumiko Hotta, and retired with the belt

- Was not a true unification bout, but it was for Levi's IFC title and set up unification opportunities in the finals of the tournament

With the L-1 Ultimate title retired by year's end, that leaves just 4 active titles. Marloes Coenen holds 3 of them (U-top, IFC, Remix), while Jennifer Howe, who was unfortunately not invited to the Remix party, holds the 4th (Extreme Challenge) title.

Who's ready for our first Lineal Pie?! 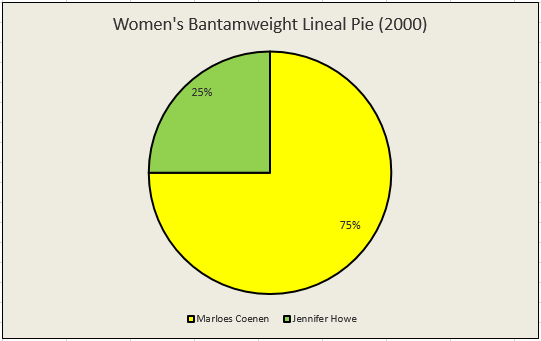 - Tsuji was the first WMMA pioneer in the Strawweight division. She was a dominant force in Japan and her run thru the tournament was part of an 8 fight winning streak to start her career

- In this, the 10th fight of her thus undefeated career, Jennifer picks up perhaps her most impressive win over a young Tara LaRosa

- This win results in Howe's 3rd title, which ties her with Marloes Coenen. Despite 3 defenses of her crown to date, Conenen's lineal crown is in question once again

- Like the Japan Cup above, this is another case of a title that has yet to migrate to the BW division. For this reason, it is excluded from the lineal pie until 2007

- D'Auguste is another overlooked pioneer in the sport. She enjoyed success over a short 4 year career at both Bantamweight and Featherweight becoming a champion with regional promotions Reality Fighting and Ring of Combat (see below) before retiring undefeated

-D'Auguste will eventually retire at 147 lbs with this title, so it never makes it into the BW lineal pie. I'll point this out again later in the timeline when the lineage is finalized in 2006

- The Smackgirl promotion was an all female fight league that was born from the Remix World Cup from 2000. It featured a limited rule set that limited ground fighting

- It's important to note that just 1 month before this tournament, Roxanne Modaferri handed Jennifer Howe her first career loss, taking her 3 lineal titles in the process. This sets up a unification opportunity during the tournament

- This fight took place in the finals of the Smackgirl tournament and was for 7 of a possible 8 titles in the division, good for 78% unification. Also interesting is the fact that these titles originated from the Open, Featherweight, and Bantamweight divisions. Yabushita was the first to bring them all together into a single lineage 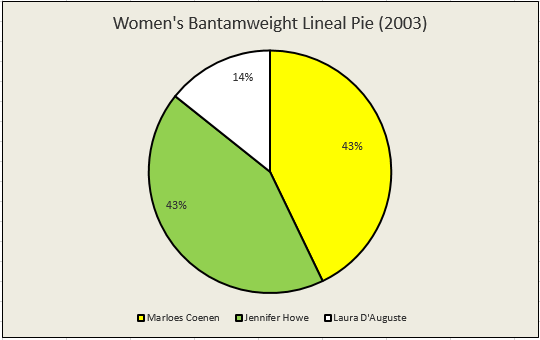 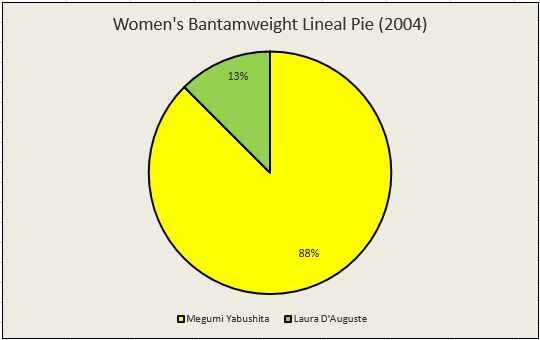 And Now for the Cliff Hanger...

As 2004 comes to a close, Megumi Yabushita sits on the thrown as Lineal Queen of the Bantamweight division with an impressive 88% unification. Her achievement is a fitting transition away from the giants of the pro wrestling world to a more skilled breed of mixed martial artist competing within defined weight classes.

In Part 2, we shift from the foundational years to a more modern era of well rounded WMMA competitors:

- Tara LaRosa makes her mark on the young division, setting records in the process

- Cyborg claims all the 145 lb titles for herself

- Boxing champion Holly Holm finds success in MMA, brings old school style vs style match up back to the spotlight