Here I will try to describe early days of MMA by using some numbers and rankings. Most of the rankings will be on a quarterly basis (quarter-end rankings).

First question is where should we start? What should be our first quarter?

Let's first review the situation in MMA before that 1993 Q4 quarter.

In 1980's we had some isolated vale tudo events in Brazil, followed by the Japanese shoot-style wrestling shows.

The only MMA organization that had regular events, championship belts and even weight categories, was Shooto.

Shooto was originally formed in 1985, as an organization and as a fighting system derived from shoot wrestling.

On September 21, 1993, Pancrase promoted their first event in Tokyo. First UFC event was still in the planning phase. 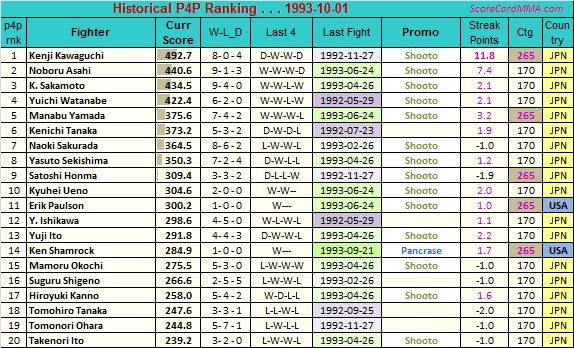 Since Shooto was the only promotion with multiple events (they had 24 events in period 1989 - 1993), most of the fighters on this list were in Shooto. And most of them are of course, from Japan.

Shooto had fighters from 135 lb to 205 lb. But, for our ranking purpose, we divided all fighters into lightweight (below 170) and heavyweight (above 170). This weight division was done for all fighters in open-weight era. 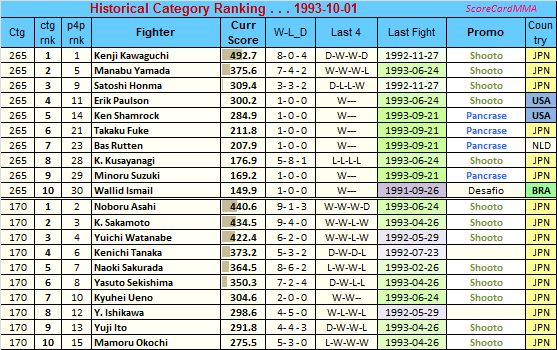 As I mentioned before, all fighters in open-weight era (1993 - 1996) were divided into two weight categories:

In 1993/1994, each of those two divisions had less than 40 fighters that were ranked by ScoreCardMMA. Other Weight Categories were introduced gradually as more fighters were added.

Following graph shows when each division was introduced and how many ranked fighters we had for each division. 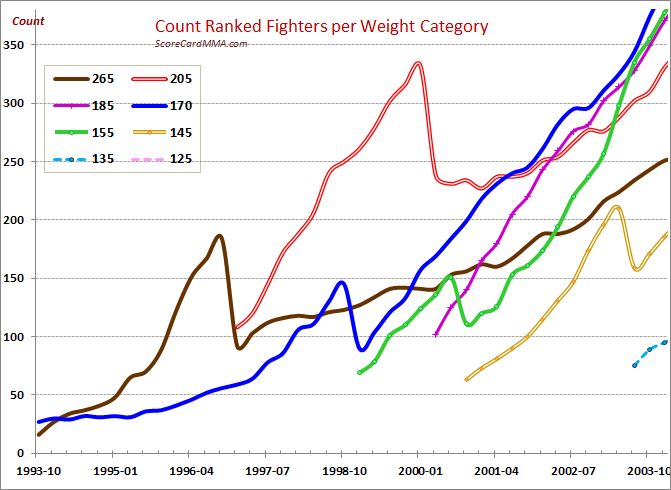 Shooto is still the top MMA Promotion, but only because Pancrase and UFC just started. They no longer have top P4P fighter, but they dominate lightweight division.

This is MMA Promotion ranking based on PromoScore:

In this quarter, Ken Shamrock was the only fighter that was fighting in both Pancrase (2 events) and UFC. Soon, he will be followed by Jason Delucia and Remco Pardoel. After that we will have many top fighters alternating between Pancrase and UFC. 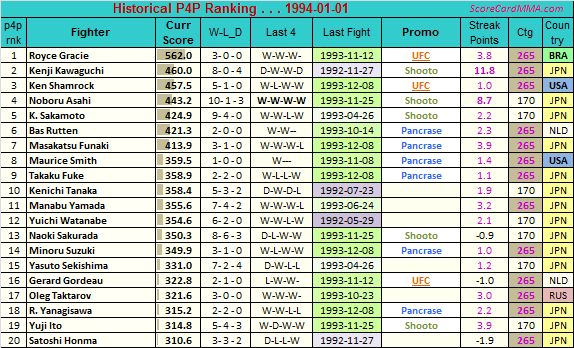 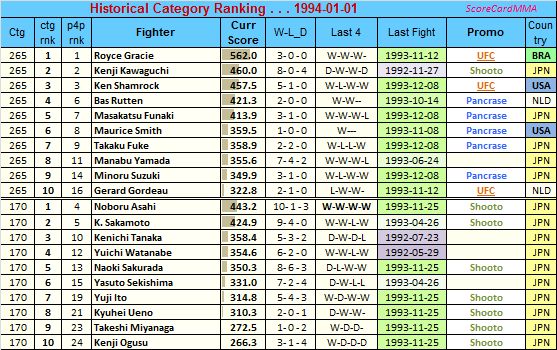 At this time there were only a few country with professional MMA fighters.

Here is the top 5 Country ranking: