Fight fans toss around Mike Tyson comparisons like nobody's business, but in Patricio Freire's case the comparison is warranted. Like Tyson, Freire is a stocky, powerfully built fighter, shorter than most in his weight class but almost never at a disadvantage in striking exchanges. Also like Tyson, Freire's game is beautiful in its simplicity. There is an essential ferocity to Freire's style--overused as it is, Pitbull does seem a fitting moniker--a ferocity not only embodied but enhanced by the mechanics of his movements.

Freire is not a stick-and-move fighter. He can jab, but he rarely paws. His style of striking is built on contact, and the notion that an opponent who feels his power will eventually begin to react to it, incidentally creating openings for more power to land. His style is utterly physical, but nevertheless elegant, not brutish. Like that of Mike Tyson, Pitbull's fighting style seems eminently suited to his smoldering personality and compact frame.

Tomorrow night, Freire rematches Bellator featherweight champion Pat Curran, hoping to avenge a close split-decision loss to the same man a year and a half ago. In Curran, Pitbull has an opponent just as multi-faceted as himself, but perhaps not as mentally strong. Time will tell if, in the wake of a few suspect performances, Curran has what it takes to repeat his success against the Brazilian--but that's all speculation. Instead, let's take a few moments to examine and appreciate the skills of the Pitbull.

Look at Mike Tyson's fights--ignore all of the pigeon-kissing, child-eating, Allah-praising madness if you can--really look at his fights, and you'll see the practiced movements of a very skilled boxer. Known more for his ferocity than his technical skill, Tyson was nonetheless methodical in his approach to the sweet science.

More than anything, Tyson liked to fight inside. Not so much in the typical sense, as Tyson was more for holding and wrestling when he found himself in tight with an opponent, but in the sense that Mike loved to step around his adversaries' feet, penetrating their stances with his own left foot before unleashing his hands. Tyson loved the inside angle, or at least Cus D'Amato did, and his entire style was built on exploiting it. Moving to his left, Tyson would explode into a position from which his opponents could neither effectively block nor strike him back. Using his squat frame to his advantage, Tyson would find his angle, and then go to work mauling his opponent with combinations from mid-range.

This is the combination that best sums up Tyson's offensive skills in my mind. Tyson possessed an excellent jab, but really his fights were won on the strength of his short punches, compact hooks and short, looping right hands. Observe how Mike uses his left hook to shift to Spinks' right, moving inside his stance before finishing him with the right. Spinks doesn't have any time to see that step or the right hand that follows it; he's too preoccupied with the timed left hook, too scared of being knocked out to realize that he's about to be knocked out.

This same angle is Pitbull's bread and butter. In fact, the very same combination constitutes the basis of his entire style. Observe.

Just like Mike, Freire uses his left hook to close the distance and set up his right. It's no looping shot, but a tight, clubbing blow designed to put his opponent in a shell and distract them from the movement of his feet. Like a tractor beam Pitbull's hook draws him into range, winding up his right hand even as it creates the angle for it to land. 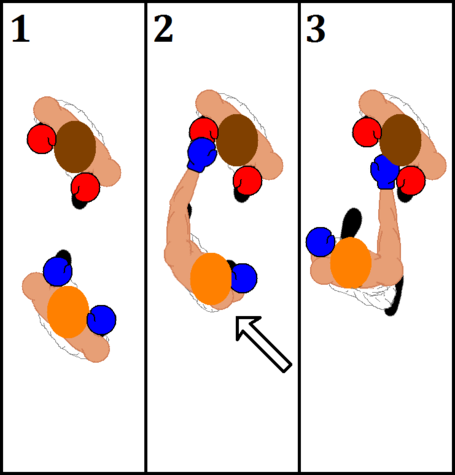 1. Blue and Red stand at about jabbing range, in a neutral position.

2. Blue moves forward and to the left, slinging his left hand into the side of Red's head as he steps.

3. Now in position to do so, Blue lands a short cross to Red's chin.

This is what I call a weak angle, but it might better be termed a "quick n' dirty angle" for Pitbull's purposes. Whereas a strong inside angle would involve Blue pivoting to face Red after his angled step, thereby nullifying Red's offense, this weak angle allows more opportunity for Red to counter in exchange for a much faster transition to a much shorter right hand for Blue. Note the way that, in closing the distance with an angled step, Blue brings his right shoulder much closer to Red's chin. This movement essentially lines up the right hand while bringing it closer to the target, making it much more difficult to defend.

The disadvantages of this angle are very real, and they troubled Freire in his last fight with Curran. For one, any angular movement to an opponent's right effectively gives him an opening for his left hand. 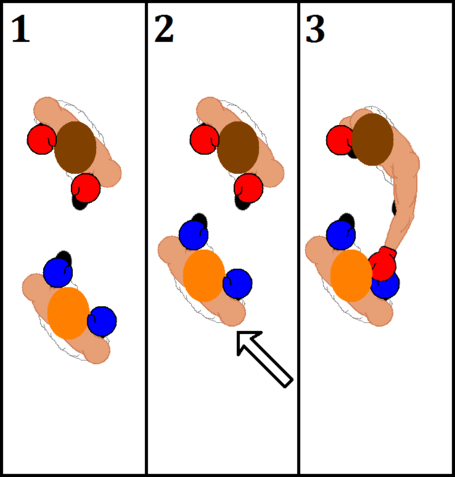 1. Blue and Red stand in neutral position. Neither is open for anything except the jab.

2. Blue takes a step forward and to the left.

3. Red has a clear shot at the side of Blue's head with his left hook.

By stepping without turning, Freire stops facing his opponent head-on, meaning he shows his temple to his opponent. To any fighter worth his salt, that's an opening too tempting to resist, and one difficult for Freire to hide.

Here, Pat Curran counters Pitbull's lead hook with a pivot hook of his own. The moment Pitbull moves his left foot, Curran cuts a subtle turn to his left and clips Pitbull on the temple with a compact hook. Curran has the positional advantage in this sequence because he is continually facing his opponent with his body, while Freire's angular step necessitates that he face away from Curran in order to line up his right hand.

Even when he is not being outmaneuvered, Freire is still at risk of being beaten to the punch. He has struggled in the past with active jabs due to his preoccupation with that weak inside angle.

In this case, Pitbull allowed Curran to effortlessly outposition him. Satisfied with anything resembling the angle he adores, Pitbull allows Curran to work to his own left, jabbing as he goes. Because he is not facing his opponent (i.e. his lead hand and foot are point past his target, to Curran's left) he is helpless to stop Curran from jabbing him once, twice, three times in the mug. Curran consistently pivoted and turned to outmaneuver Pitbull, landing precise, straight punches down Pitbull's unprotected center.

Of course, this risk works both ways. Even when Pitbull's opponents do successfully circle away from his step, they can still find themselves in the path of circular strikes from his left hand. A jab like Curran's more or less requires the thrower to be facing his opponent's center line in order to land, but a left hook arcs through the target, giving it a much wider area of effect.

Here, Curran covers his own angular footwork with a wide right hand, which Pitbull blocks, before pivoting to reset himself. He finds himself at a strong angle to Pitbull, but can't seem to get away from the Brazilian's left hook, which clubs him on the ear and knocks him onto his heels. Again, this is the curious property of circular punches that allows them to "break the rules" of boxing. Yes, Curran cuts a good angle in this GIF, but turning left to get away from a left hook is somewhat like running down the tracks to get away from a train. Even after a perfect pivot, Freire's opponents often find themselves sitting right in the path of one of his looping shots.

And, despite my own comparison to Mike Tyson, let's not forget that this is mixed martial arts, and Patricio Freire is not a boxer. In boxing, the answer to Pitbull's heatseeking left hand would be to create distance, but the Brazilian has a sneaky habit of engaging in a battle of hands just long enough to make you forget that he knows how to kick.

Here he applies the same principle as above, tracking Curran's circular movement with a circular strike, but accounts for the greater range by throwing a kick instead of a punch. As Curran circles to his left, Freire more or less keeps his feet planted until his opponent is in perfect position to be met by what is essentially a rear left roundhouse to the head. And despite being almost completely blocked, Pitbull's strike sends Curran reeling around the cage.

I can't think of a better summation of the sheer physicality of Patricio Freire than that.