BE's striking specialist Connor Ruebusch breaks down the best bits of technique and strategy from Saturday's UFC 177--or at least vaguely talks about technique. Sort of.

The Tech Recap returns! Bloody Elbow brings you the most intriguing moments tactical and technical from last weekend's UFC 177. Now, it's become par for the course to begin any article pertaining to this event with the disclaimer that it was, in fact, the worst pay-per-view card ever broadcast by the UFC. We'll try to avoid mentioning that today, though--oh wait, I think I just did. Well, in any case, UFC 177 had some really fun style matchups, and produced lots of memorable action that will only be remembered by about 75,000 people. Oops, there I go again!

Okay, let's avoid any further discussion of the dire consequences of MMA oversaturation and--eh, let's just get to the face-punching.

Any time you see a fighter with bad defense, or even just unorthodox defense, do yourself a favor and tune Joe Rogan out. I like Joe as much as the next guy--his enthusiasm is infectious, and he's the first person to call if any errant ice cubes happen to turn up in the Octagon--but the next time I have to hear him go on about the relative altitude of a fighter's hands, chin, or shoulders, I'm going to destroy a whole case of Fear Factor DVDs.

So maybe that's a bit of an overreaction, but my point is this: there are dozens of factors at play in a fight that can affect a fighter's ability to avoid punches, as well as his ability to withstand the ones that land. If hand position were all that mattered in defense, then stopping a punch would be as simple as keeping the hands near the chin, which it isn't. And, as for attempting to lift the shoulders to cover the chin--something Rogan specifically called for in the bout we're about to break down--recall last week's analysis of Michael Bisping, whose chin is always perilously close to being cracked because of his constantly compromised posture.

For Ramsey Nijem, who suffered another knockout loss last weekend at the hands of Carlos Diego Ferreira, the problem is complicated. To make a long story short, Nijem's susceptibility to punches comes down to a series of bad habits that, despite a great deal of improvement under new trainer Tareq Azim, simply refuse to go away entirely. Most prominently is Nijem's persistent tendency to fall forward into the pocket with every strike. To be fair, this has been mitigated somewhat. Nijem actually threw a defensively sound combination in the opening seconds of Saturday's bout that spoke to the effectiveness of Azim's training. 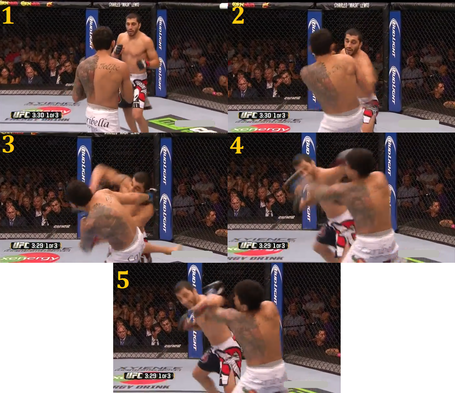 1. Nijem begins out of range.

3. . . . followed by an overhand right that brings his head forward into the pocket.

4. Ferreira loads up on a swinging left hand, but Nijem intercepts him with a left hook to the temple.

5. Ferreira's punch falls short as Nijem pulls his head out of range with his hook.

The right hand here isn't pretty. Elbow high, head forward--these things are not necessary to throw a powerful punch, and in fact they often inhibit power generation. But the left hook with which Nijem finishes his combination shows, if not defensive awareness, then at least a newly defensive skillset. Even if Nijem isn't the most defensively cognizant fighter in the world, Azim clearly has defense in mind for Nijem's training, and that's what counts. By adding a fade-away left hook to Nijem's arsenal, Azim automatically gives Nijem an accessible, relatively safe way to exit range while creating a threat.

Of course, Rome wasn't built in a day, and Nijem still found himself walking into Ferreira's wild counters. 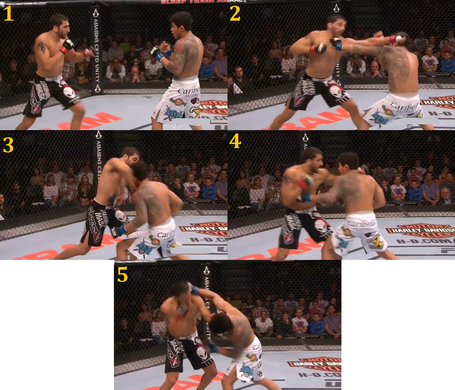 1. Ferreira has Nijem backed up close to the fence.

2. Nijem leads with a long jab, while Ferreira attempts to slip and counter with a jab of his own. Neither jab lands.

3. Nijem follows up with the same overhand right, his head falling drastically forward into Ferreira's range.

4. Committed too heavily to his right hand,  Nijem mistimes the same left hook from above, missing Ferreira's jaw.

5. Stuck in no-man's land and out of safe options, Nijem attempts a simple retreat, and catches a Ferreira overhand right behind the ear.

Now, according to Joe, this is what Nijem gets for "keeping his head up high," a propensity that Mr. Rogan asserts Nijem as shown throughout his career. While standing tall is part of Nijem's problem, the biggest error in this exchange was actually his commitment of bodyweight. Notice that, in frame 1, Nijem's body is already oriented forward--he appears to be leaning in Ferreira's direction, indicating that his weight is situated over his left foot. Stepping into his jab in frame 2, Nijem throws even more weight forward, meaning that the only way to put any power on his cross in frame three is to fling himself bodily into Ferreira.

Thus, by the time Nijem attempts to recover his position with his left hook, a punch which should pull his bodyweight back over his right foot, he has already placed himself too close to Ferreira to easily avoid the counter. Sure, a level change might have helped him to evade Ferreira's wild punch, but the more pressing issue is Ramsey's tendency to lunge head-first into his opponents' range.

I have no doubts that Tareq Azim, who coaches future lightweight title challenger Gilbert Melendez, will continue to improve the mechanics of Nijem's striking, but this fight serves as a timely reminder that nothing worth doing is done easily. Nijem has a host of bad habits, and they may continue to haunt him for the rest of his career.

Bethe Correia is quite possible the hottest prospect in the women's bantamweight division right now. And now, with three wins under the UFC banner, each more impressive than the last, the female Pitbull seems fast on her way to a title shot. At just over two years into her MMA career, Correia's ceiling is not yet known, but her bout at UFC 177, against WMMA pioneer Shayna Baszler, certainly suggested a few goals for Correia's future development before her eventual date with champion Ronda Rousey.

In particular, the ease with which Baszler trapped Correia in the clinch--where Ronda Rousey thrives--does not bode well for the Brazilian. 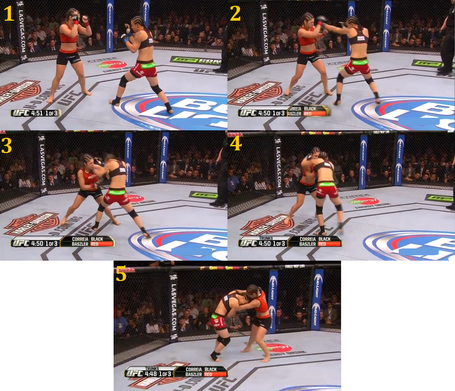 3. . . . followed by a counter jab that misses as Baszler steps deep into the pocket with a second jab of her own.

4. Close enough to grab on, Baszler starts working to trap Correia's left arm and wrap up her neck with a collar tie.

5. Correia smartly gets her back away from the fence, but Baszler has attained her grips and runs her across the Octagon into the opposite wall.

This is the timeless struggle of strikers in MMA. How do you stop the takedowns of an opponent with superior wrestling without committing yourself to a wrestling match in the cage? We often think of takedown defense in terms of sprawls and limp legs to squash and slip out of takedown attempts, but those are pure wrestling responses to wrestling attacks. If a striker like Correia wishes to use her advantages on a grappler like Baszler, it would behoove her to defend takedowns like a striker.

The answer is preemptive takedown defense--using strikes and movement, one can nip a takedown or clinch attempt in the bud, killing the opponent's momentum before any grips can be achieved. The sequence above emphasizes the absence of this in Correia's game. Note the position of Correia's left foot in frames 1-3. While Baszler feints and strikes her way into the pocket, Correia remains rooted in place, waiting for the opening to land a counter shot. This would be risky even for a striker with one-punch knockout power; for Correia, who relies on an accumulation of strikes to do damage, it is near-suicidal.

To better understand what Correia could have done, let's turn to a master of takedown defense: Jose Aldo. Aldo possesses excellent wrestling skills, but more often than not his opponents find it difficult to even initiate takedowns thanks to the featherweight champion's calculated defensive movement. 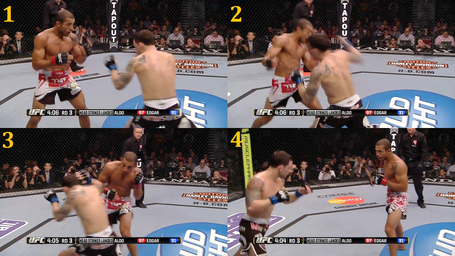 1. Edgar steps forward with a jab feint. Aldo waits for the real attack.

3. Aldo slips successfully, moving to the outside of Edgar's punch.

4. A small pivot, and Aldo once again faces Edgar, this time with the open Octagon at his back.

It's the small things that win fights at the championship level. A short step back here, a quick pivot there, and an opponent desperate to close the range can find themselves suddenly facing the wrong way and, even better, open for a devastating counter. Above, Correia waited on Baszler to attempt her counter jab, effectively handing the reins of the fight to her opponent. Instead, she should have been constantly adjusting to Baszler's every forward movement, changing angles to keep herself facing Baszler, and to keep her back away from the fence. Against a seriously talented grappler, any reactive defense to a takedown is simply too little too late. The best way to stop a wrestler--or judoka--is to keep them from grappling in the first place.

That does it for UFC 177. It was fun, but it wasn't exactly one for the ages. Fortunately, there's a lot of good fighting in our future, and next weekend's combination of Bellator and UFC should whet any hardcore fight fan's appetite for quality combat.