UFC lightweight standout, Bobby Green just had another family member shot in what might turn out to be a gang related shooting, as was thought to be the case with his younger brother, Mitchell, who was shot and killed in May of this year.

In a very unfortunate turn of events, UFC Lightweight, Bobby Green has just had another sibling involved in an act of violence. This will be the second family member involved in what might be a gang affiliated shooting, as was thought to be the case with his younger brother, Mitchell Davis, Jr. back in May.

EDIT: We at Bloody Elbow try to provide the news as it breaks and are careful in our efforts to not slant stories in a particular direction. Green's younger brother was shot in a gang violence related shooting earlier this year. Bobby was very candid about the incident in interviews. When this brother was shot, special attention was given to the story as the only thing we had to go by was Bobby's Facebook posts, which is why I used the words "what might be a gang affiliated shooting." There was no malicious intent here, but I would like to sincerely apologize to Mr. Green and his family for any misunderstandings/misinterpretations that may have occurred by my choice of language. I have updated the post with some tweets from Bobby, to inform our readers that this shooting was not gang related.

Edit #2: Bobby reached out to me to clear the air and was very kind and understanding of the miscommunication in the article. I feel it's important for our readers to know when peaceful resolutions are achieved. Thanks to Mr. Green for taking the time to speak with me. 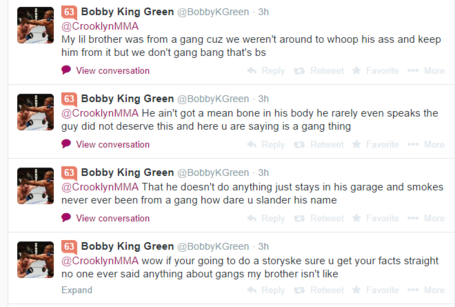 Last night (approximately 15 hours ago), Green posted this to his Facebook page:

Man they just shot my brother 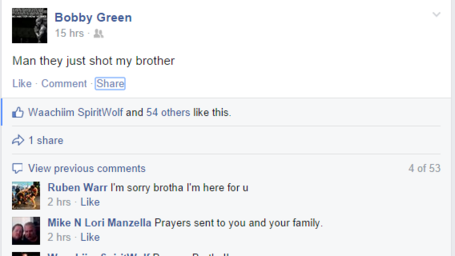 It is unclear what physical condition his brother is in, but judging by the comments attached to the post, it appears he survived the shooting. Bobby does go on to reference the areas he grew up and currently resides in:

Green, who last fought Josh Thomson to a decision victory and is currently on a 4-0 run within the UFC, has just recently allowed himself the time to deal with the grief from his younger brother's death over the last few months, as reported by MMA Junkie;

"It's been very hard to deal with it and deal with that pain. I haven't had time to really sit back and think about it."

"I'm going to go visit his grave and really express my hurt," Green said. "I've been so busy and so occupied - because I only took the fight on 12-days' notice - that you don't have time to do all these different things. So I'm just ready now.

"I'm going to take my time to really cry for my brother. I didn't really get the time to share that."

Bloody Elbow will keep our readers up to date on this story as more information becomes available.