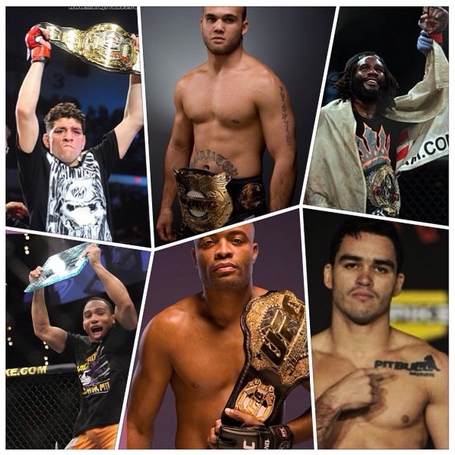 At one point in their careers ...

Nick Diaz had a 11-6 record, lost three fights in a row and was cut from the UFC. They said he would never be someone relevant. After that, Diaz won 15 fights, lost 3 and had 1 no contest, becoming one of the biggest stars in the MMA world in the proccess. From 2008 to 2011 he had 11 consecutive victories and the Strikeforce title.

Robbie Lawler from 2003 to 2004 amassed one win and three defeats in the UFC. The promotion cut him after a promising start that saw him be appointed as a future belt holder. From 2005 until mid-2009 he accumulated 8 wins, 1 loss and 1 no contest, became the champion of Elite XC and two other promotions. Everything seemed to go well, but from June 2009 until early 2012 Robbie accumulated 3 wins and 5 losses. He was over, they said. But once again Robbie reinvented himself, won five of six UFC fights, with the only defeat in closely contested title fight. He is now the favorite for the rematch.

Daniel Straus began his career with a mediocre 4-3. After his last defeat in that period to the present day, Straus won 18 fights, lost only 2 and was crowned world champion in Bellator. At one point he won 12 consecutive fights.

John Dodson had amassed a record of 9 wins and 5 losses. From 2010 to the present day, he won 7 times and lost only once, in a title fight that he was very close to winning. Not to mention the three victories on the reality show The Ultimate Fighter that led to the title in weight class above his own. Several people talk about him as a future champion.

Anderson Silva was once touted as the best welterweight in the world. Then lost to Daiju Takase, a Japanese with 4-7-1 record. Later he beat three respectable opponents and then lost to Ryo Chonan, a fighter with a 7-4 record. They said he was finished, would never be anything. Four fights later and with one loss by disqualification in the middle, Anderson entered the UFC. The Brazilian won 16 straight fights inside the organization, became the champion in his second fight and rewrote the most important records of the promotion. He reigned for seven years.

At one point in his career, Patricky "Pitbull" Freire had a record of 13-6...