The Nevada Athletic Commission will be convening on September 23 to determine the punishments (if any) that will be handed out to UFC light heavyweight rivals, Daniel Cormier and Jon Jones following their August 4th brawl during a press conference for UFC 178, according to a report by MMA Fighting. While pre-fight skirmishes happen frequently in the sport, it is rarely between high profile UFC fighters.

The brawl happened when the two competitors were brought up on a stage for photo ops. Words were exchanged, punches were launched, shoes were thrown, and poor Dave Sholler was tossed aside like a 5 year-old. Now, when you do a google search of Sholler's name, the first result is "Dave Sholler Meme" which will net you this image: 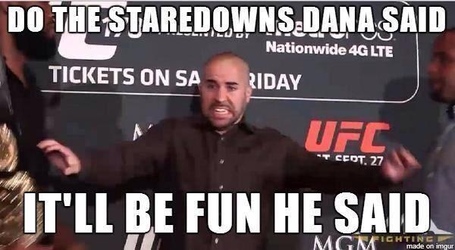 The commission is asking that both fighters attend, if at all possible. Cormier has already responded, stating;

"I know I got the mail, I signed for it, I tried to give it back, but they would not accept it," Cormier joked. "So I guess I will be there next Tuesday night."

As always, Bloody Elbow will keep our readers updated on this story as more information becomes available.