Christy Mack took to twitter on Sunday afternoon to offer details on her recovery process over the past few weeks since her brutal domestic violence incident at the hands of Jon Koppenhaver.

It has been less than two months since Christy Mack was the victim of a savage beating at the hands of ex-boyfriend Jon Koppenhaver, which led to her hospitalization and to him being taken into custody.

Mack took to twitter to update her fans on the harrowing details of her multiple procedures and trips to the dentist and hospital over the past few weeks. She also provided a time-lapse of her face over that time period to add to the already-disturbing details. 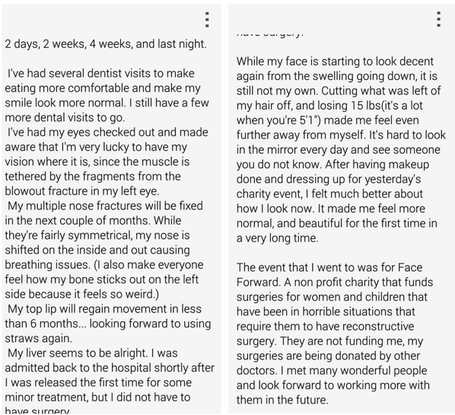 Koppenhaver was recently transported from Ventura County Jail in California and moved to the Clark County Detention Center in Nevada, where he will face 31 charges for his vicious assault of Mack and a potential life sentence in prison.