Another weekend full of UFC fights and, in addition to a healthy dosage of fights-you-can-certainly-miss, there were some real treats of technique, strategy, and all-around tricky fighting. This edition of the Technique Recap brings you the best of these from the UFC's most recent double header, which included both UFC Macau: Bisping vs Le, and UFC Tulsa: Henderson vs Dos Anjos.

His close win over Alex Garcia in the headliner spot of the Tulsa prelims may not have been Neil Magny's best performance, but it was a respectable, workmanlike affair that gave the massive lightweight a chance to show off some of his improved grappling skills, a chance he desperately needed after being dominated on the canvas by former Jungle Fight champion Rodrigo de Lima in his last outing.

One very interesting sequence took place after a series of mad scrambles in round one. Magny found himself on top of Garcia in half guard, and used a familiar grappling technique to create an opportunity for some punishing strikes. 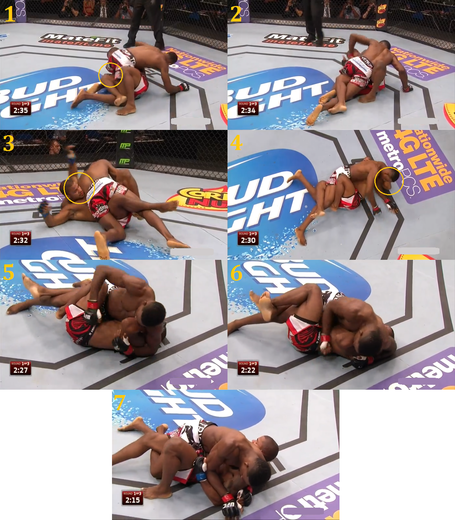 1. Garcia, on the bottom places his hands (circled, not visible) on the knee of Neil Magny in order to push his legs apart and regain guard.

2. While Garcia's hands are occupied, Magny punishes him with three sharp punches to the face that both stop Garcia's escape attempts and flatten him out on his back.

3. Now Magny switches his base, laying one hip on the center of Garcia's chest and diving his left arm (circled) under that of Garcia's.

4. Garcia crossfaces Magny with his left arm (circled) to create space and start working for an escape.

5. Magny repositions his own left arm, trapping Garcia's crossface under his arm pit and using his bodyweight to collapse the angle of Garcia's arm.

6. Now, with Garcia's arm trapped, Magny is free to hammer his ribs with his free hand.

7. Garcia, in an effort to defend Magny's strikes, explodes, forcing his arm free, but unintentionally putting it right where Magny can trap it and begin working for a kimura.

The sequence above demonstrates Magny's growing understanding of the ground game. His movements are methodical and precise, all part of a predetermined series of attacks, adjustments, and counters. What really stands out about the procedure is how well it is suited for MMA. Unlike a typical lockflow, Magny's use of this top half guard position builds off of and sets up strikes. Individually his hammerfists and elbows to the ribs and thighs of Garcia were not damaging, but accumulated, and combined with his heavy top pressure, Magny racked up more than just points against a dangerous opponent. Unfortunately, Magny was unable to lock in the kimura with this first attempt, but his second go proved more successful. 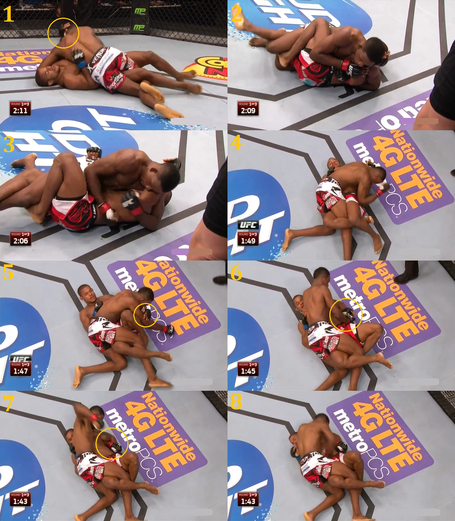 2. This time Magny is unable to trap Garcia's wrist under his armpit, so he uses his free right hand to keep Garcia's arm trapped in the crook of his neck.

3. By rocking his weight toward Garcia's head, Magny crushes Garcia's crossface, once again opening up his ribs for some hammerfists. His left hand is tucked under Garcia's triceps.

4. Magny switches to stabbing Garcia's thigh with the point of his right elbow.

5. Forced to react, Garcia gives up on his ineffective crossface and moves his left hand (circled) to control Magny's attacking right arm.

6. With Garcia's arm now in position, Magny quickly grabs his wrist with his right hand and slides his left arm through to complete the double wrist lock grip.

7. Instead of attacking the kimura, Magny pins Garcia's arm by the wrist with his left hand . . .

8. . . . and drives home a powerful straight punch to the pit of Garcia's stomach.

Despite having the kimura locked in, Magny wisely chose to attack with strikes instead, something that shows off his tactical mindset. Magny would have been unlikely to finish a kimura against the stocky, powerful Garcia, and very well might have lost position in the process of going for it. In addition, Garcia was in the unfortunate position of being unable to defend his torso with his left arm, which was pinned to floor by Magny's wrist control.

The use of grappling positions to attack with strikes--elbows against an opponent caught in a triangle, heel strikes to the gut from back control, or body shots with a locked-in kimura grip--is becoming more and more common in the sport of mixed martial arts. This facet of fighting is still ripe for innovation, and it's always exciting to see a young fighter utilize some new techniques to blend the different phases of martial arts into one combat style.

The Problem with Michael Bisping
Featuring: Who do you think?

Count me among the many MMA fans who neglected to tune in for the UFC's third trip to Macau. Maybe neglect isn't the right word. Rather, I willfully chose to catch this one after the fact, and I'm glad I did. For those of you who haven't seen it yet, there are about three fights worth watching, and even those are, for the most part, a little disappointing. Case in point, Michael Bisping's main event tilt, which saw the Count looking as decidedly vulnerable as ever against a Cung Le whose face began rapidly decomposing in the second round.

Offensively, of course, Bisping is always entertaining. His strikes are varied and accurate, and he is a veritable cardio machine. Defensively, however, Bisping continues to show the exact same flaws that have plagued him his entire career. What is it that makes Bisping so easy to catch with counters, and why is he so easily wobbled by every power shot that does land? 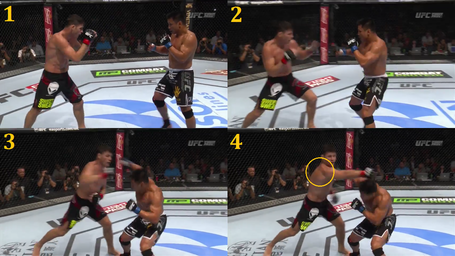 1.Bisping and Le square off.

2. Le leads with a jab, and Bisping retreats, his right foot stuck out behind him.

4. Bisping is caught by Le's hook as his own punch sails over the Sanshou stylist's shoulder. Bisping's own shoulder has fully rotated forward  with his punch.

Among many other factors, posture and chin placement are affected by shoulder position. Ideally, a fighter's shoulders should be held back, with the upper back straight and the chest oriented upward. This enables the chin to be held very close to the chest with only a slight tilt of the head and, more importantly, links the muscles of the neck with those of the back, furthering one's ability to absorb blows to the head. Compare Bisping's posture to that of Bellator's Michael Chandler, who possesses excellent posture (and consequently an excellent ability to absorb punishment). 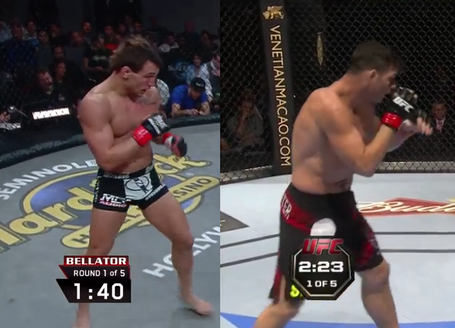 Note the way that Chandler, on the left, is easily able to touch his chin to his chest. With his shoulders back and his back straight, his chest practically rises to meet his chin, and his jaw sits comfortably below the line of his left shoulder. Bisping, on the right, has his shoulders forward, and his upper back rounded. This orients his chest downward, leaving a large gap between his chin and the rest of his body.

The sad irony of this is that Bisping is hunching his shoulders in the name of defense, while completely compromising his ability to absorb punches. Countless trainers teach their fighters to hunch their shoulders to protect their chins, not realizing that this very position causes any sudden force delivered to the athlete's head, e.g. a punch, to travel through the jaw into the neck, and . . . nowhere else. Without a strong kinetic chain to absorb impact, a fighter's punch resistance is left completely up to the natural physiology of his head--his "chin." And fighters without excellent chins--men like Michael Bisping, Eddie Alvarez, Wanderlei Silva, and many others--have no choice but to stagger through many of their fights relying on heart, will, and skill to carry them through, when some physical therapy and some training adjustments would ease the pressure considerably.

Bisping's posture only worsens when he punches, his already raised shoulders rolling even farther forward and causing his chin to pop up into the air, where it is easily picked off by any half-accurate counter punch. It's an unfortunate state of affairs for one of the UFC's most talented middleweights, whose repeated runs to the top of the division will almost certainly be stopped short time and time again by his inability to take punishment. And even against mid-tier fighters such as Cung Le, Brian Stann, and Wanderlei Silva, Bisping finds himself constantly haunted by his "chin," never realizing that his posture is actually to blame.

After that bummer-fest, I'd like to end things on a positive note. Enter Max Holloway, who has quickly become one of the UFC's most consistent action fighters and, at just 22 years old, a rapidly developing prospect with a uniquely MMA-style of striking.

Stance-switching is common in MMA, but there aren't many fighters who really understand how to utilize both southpaw and orthodox stances equally well. The average, orthodox mixed martial artist possesses maybe two or three techniques that he or she likes to throw from southpaw before quickly switching back to his or her natural stance. Most fighters just aren't comfortable fighting in two stances, leading them to miss opportunities for creative offense.

Along with Dominick Cruz and TJ Dillashaw, Max Holloway is one of the few MMA fighters who manages to utilize both southpaw and orthodox to their fullest potential, taking unexpected angles and launching sneaky, unpredictable attacks. 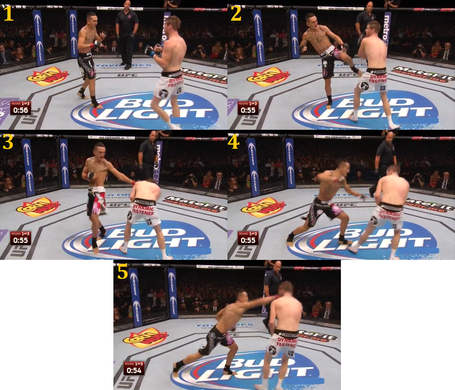 2. Holloway launches forward with a left high kick, but bails on it when the distance feels wrong.

3. Though his feet end up out of position, Holloway measures the distance between himself and the ducking Collard with his left hand.

This sequence demonstrates the usefulness of being able to fight out of both stances--even after missing or bailing on a kick from southpaw and winding up with his left leg forward, Holloway does not feel "out of position." Instead, he quickly capitalizes on whatever target is open from his new orthodox stance.

Here's another sequence that shows how useful stance switches can be for counter punchers. 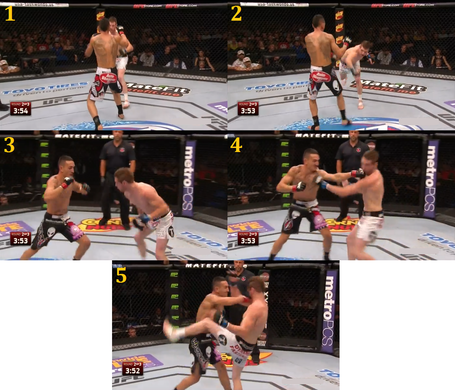 2. Collard lunges at Holloway's body with a straight right, and Holloway pulls his torso out of range by sliding his right foot back . . .

4. Holloway, expecting a full retreat, continues to barrel forward, so Holloway meets him with an orthodox jab . . .

In boxing, many of the best counter punchers have been stance-switchers. Typically, these switch-hitters are those who prefer to fight in an "aggressive counter punching" style, forcing movements and attacks from the opponent in order to find angles on them and land devastating strikes. Mike Tyson and Herol Graham are two such fighters who frequently moved forward against opponents only to use a change of stance to quickly change angles and strike the opponent before he could adjust. The classic example is Mike Tyson's battering of Buster Mathis after a quick switch to southpaw.

Though he lacks the power of a Mike Tyson or Herol Graham (in part due to the fact that he lacks proper leverage on his strikes), Holloway is quickly developing into a similarly opportunistic fighter. There are defensive liabilities to a change of stance within an opponent's range, but a confident and aware fighter can, aided by the free movement of his feet, find certain angles and attacks that simply don't exist for the once-stance fighter.

That's all for today, folks! Thanks for joining me for this edition of the Technique Recap. Stick around, because later this week we'll be turning the tables on another excellent stance-switcher in bantamweight champ TJ Dillashaw to analyze how former champion Renan Barao can capitalize on the weaknesses in the switch-hitter's style.