BE's striking specialist breaks down the Muay Thai skills that Rafael Dos Anjos used to knock out Benson Henderson in the main event of UFC Fight Night Tulsa, the product of a better-than-ever trainer in Rafael Cordeiro of Kings MMA.

Watching Rafael Dos Anjos melt former WEC and UFC lightweight champion Ben Henderson in the first round, I was struck by the progress of two different members of the mixed martial arts community. The first was Dos Anjos himself: it's hard to think of another fighter who has improved so much since his first fight in the UFC. The second was Rafael Cordeiro, Dos Anjos' trainer.

As much development as Dos Anjos has gone through, going from pure BJJ stylist to devastating striker, so too has Cordeiro grown as a teacher of martial arts. There is an evident maturation of Cordeiro's process that has led him from producing strikers like this, to ones like this (sorry Ninja--I love you, man). Now, with fighters like Dos Anjos and Fabricio Werdum becoming proficient kickboxers, and already excellent strikers like Machida developing entirely new abilities under Cordeiro's tutelage, we can safely say that the founder of both Chute Boxe and Kings MMA has developed into a truly world-class coach.

Cordeiro has always been known as an advocate of aggression. Essentially the Freddie Roach of MMA, Cordeiro places less emphasis on perfect technique than he does on application: he prefers his fighters to come forward, throw a high volume of strikes, and break the opponent down with exhausting pressure. However, the raw aggression that marked the early generation of Chute Boxe fighters is no more; this new generation of Cordeiro-trained pressures using a refined, systematic approach.

This new Cordeiro style was key to Dos Anjos shocking win over Ben Henderson on Saturday, and today we'll be examining one of Cordeiro's most important developments: feints, feints, feints.

In Ben Henderson, Dos Anjos found himself battling a fighter with kicks just as potent, if not more so, than his own. Henderson throws nothing but weighty, powerful blows with his legs, and Dos Anjos was forced to eat his fair share of these kicks to the body and legs. But where Henderson's kicks were only a danger in and of themselves, Dos Anjos' leg strikes were a well-integrated part of his overall game.

Unlike Henderson, Dos Anjos' kicks don't need to be powerful to be effective. He can kick hard enough, sure, but more often than not his legs served merely as set-ups for his quick, accurate hands. 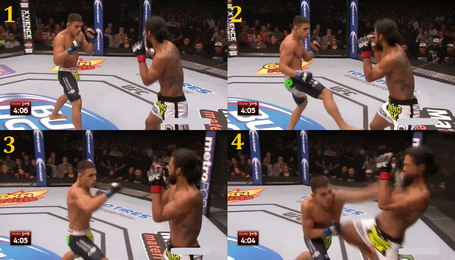 1. Dos Anjos inches forward until Ben Henderson is merely a few feet from the cage.

3. Dos Anjos uses the extension of his leg to advance into punching range . . .

4. . . . where he cracks Henderson with an overhand left.

I call this maneuver the Team Quest special, and it's an absolute classic set-up for MMA. But where fighters like Dan Henderson find themselves irreversibly committed to the cross once the kick has landed, Dos Anjos artfully maintained balance throughout the attack, even adjusting his range with a short hop-step after moving forward with the kick. The beauty of this set-up lies in the fact that Dos Anjos requires no recovery after throwing the kick--he is simply in position and ready to punch. And Henderson, never the savviest of defensive fighters, had a very difficult time keeping up with an attack that varied so seamlessly from low to high.

Another very potent tool for Dos Anjos is his deft right hand. Over the past two years Dos Anjos has developed a diverse, stinging southpaw jab, which he uses as both punishing weapon and distracting set-up. The minute leading up to the finish saw Dos Anjos repeatedly bothering Henderson with his flicking right hand. 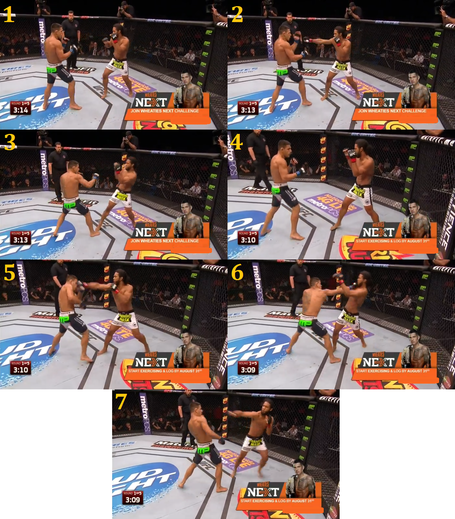 1. Dos Anjos stands with his weight back, ready to exchange jabs with Henderson.

3. . . . and then steps forward, feinting with a jab of his own. Henderson retreats.

4. The fighters reset, this time with Henderson near to the fence.

5. Henderson steps forward with another jab, which Dos Anjos parries.

6. Dos Anjos counters with his own jab, and Henderson pulls back abruptly.

7. A winging right hook from Henderson falls very wide of the mark.

Gray Maynard and Ross Pearson put on a thoroughly entertaining display of boxing in their co-main event slot on the UFC's 47th Fight Night event in Bangor, Maine. BE's striking specialist Connor Ruebusch breaks it down.

The first takeaway from this sequence is Dos Anjos very intelligent position. Note the way that he keeps the heel of his lead foot off the ground while his rear foot is planted flat. Dos Anjos is not the first Cordeiro fighter to utilize a stance like this--Shogun Rua and Wanderlei Silva have both stood this way throughout their careers--but he is among the first to demonstrate the real advantages of the position. With his right heel lifted, Dos Anjos is able to quickly move forward to pressure Henderson. As he does, he can plant that right heel to easily add weight to any left-handed punch, or keep it raised to quickly pivot into a left kick. Keeping the heel raised as he steps also allows Dos Anjos to jab without falling forward. This "cat-step" keeps his body close to his rear leg even while his weight moves forward, allowing his jab to be exactly what it should be: a safe, tactical strike.

The second takeaway is the way that Dos Anjos maintains the initiative. By utilizing his southpaw jab to paw, flick, and stab at Henderson, Dos Anjos keeps his opponent reactive. When Henderson is able to establish his methodical rhythm, he dictates fights like few other mixed martial artists. Thus, Dos Anjos wisely elected to constantly force Henderson to move around the cage and react to his varied attacks, jabbing, feinting, and kicking to prevent Bendo from ever seizing the initiative, just like Anthony Pettis did when he took Henderson's UFC belt.

Once the jab had been established, Dos Anjos was able to open up with his power strikes. 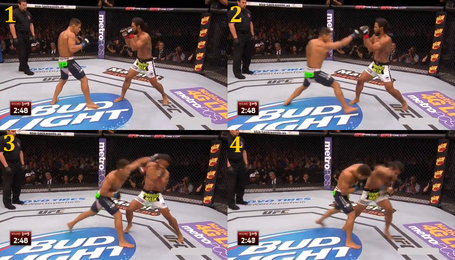 1. Dos Anjos and Henderson stand just out of boxing range.

2. Dos Anjos flicks out a jab, hiding a deep angled step to set up his left hand.

3. Dos Anjos' left clips Henderson on the temple before he can counter.

4. Thanks to Dos Anjos' slight level change, Henderson's punch slips harmlessly off the top of his skull.

One of the keys to solving an opponent's style is learning what he likes to do. Every fighter has skills that he feels confident in, or attacks that he finds more comfortable than others. Some fighters only pass to one side on the ground, others only feel comfortable attacking with their rear hand. In this case, Dos Anjos quickly learned that Ben Henderson likes to throw his right hook on the retreat. When forced back, he will wing his right hand in a wide arc, hoping to decapitate an overeager opponent.

Having understood this, Dos Anjos was able to draw Henderson into his favorite counter and beat him to the punch with a faster, linear attack. And, though his left foot does drag forward, Dos Anjos head never travels past his lead foot--a promising sign for a student of Rafael Cordeiro, who often seems to under-emphasize proper technique.

After stunning Henderson with the above left hand, Dos Anjos pushed his opponent toward the cage and did precisely what Anthony Pettis did at UFC 164: hit Henderson with everything except what he expected. 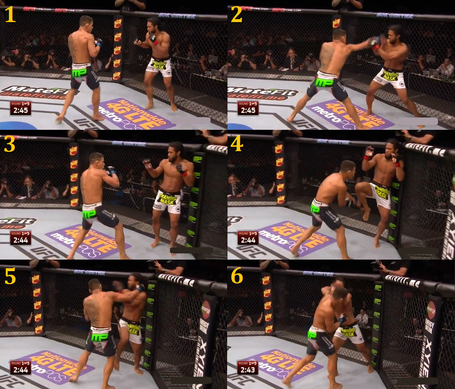 1. Henderson retreats into the fence.

2. Dos Anjos keeps him on the reactive with a long jab.

3. As Henderson circles to his left, Dos Anjos visibly loads up his left hand.

4. Stepping and shifting to his right leg as if throwing a cross, Dos Anjos convinces Henderson to defend a threat from his left side.

5. Instead, he comes up with a hook from his chambered right side . . .

6. . . . followed by a short overhand left behind Henderson's ear.

There is a simple beauty to Dos Anjos onslaught here. Henderson has just been hurt with a left hand, and Dos Anjos knows that Henderson knows the left is Dos Anjos' best punch. So Dos Anjos allows Henderson to believe that another left is coming, selling the strike with a very convincing feint, only to catch him on the jaw with a sneaky right hook. Dos Anjos' strikes weren't necessarily as tight nor as sharp as they should have been, but for an until-recently one-dimensional grappler, there is very little to frown at about Rafael's newfound striking chops.

Everything about Dos Anjos' performance--from the demoralizing body kicks, to the up-down variation of attacks, to the flying knee timed just when Henderson was getting desperate for the takedown--underscores just how far he's come as a fighter, and emphasizes the significant growth in the teaching methods of his trainer Rafael Cordeiro. I'm not certain if Dos Anjos can avenge the tough loss he suffered to Khabib Nurmagomedov in April, but there's no longer any denying the fact that he is a top 5 fighter in the UFC's most talent-rich division.

I, for one, can't wait to see him back in the Octagon.