In this interview with BloodyElbow.com, Ronda Rousey spoke about a bunch of topics such as several BJJ Champions calling her out, Gina Carano, WWE Summerslam, and which X-Men character she would be.

Share All sharing options for: Interview: Ronda Rousey says Gina Carano is 'insisting on fighting at 135'

Ronda Rousey was a special guest for UFC: Macau, and the UFC Women's Bantamweight Champion was a huge hit with the Chinese fans and media during several press activities which included few Q&A's and red carpet events for both the UFC event and the Expendables 3 premiere.

It was almost 1 a.m. following the UFC: Macau post-fight press conference and scrums, and despite the jet lag and busy schedule, Rousey was still gracious enough to spend a few more minutes to speak with BloodyElbow.com about a bunch of topics. She addressed several subjects including a potential bout against Gina Carano, attending the WWE SummerSlam, multiple BJJ Champions calling her out, and which X-Men character would she be.

Ronda Rousey: Rehab is good. Everyone that has worked on me medically say that I have freakish healing powers. So if I was an X-men I'd probably be Wolverine even if my name is Jean and it would be cooler to be Jean Grey.

My physical therapist says I'm about 2 or 3 weeks ahead of schedule. I've already started training. My mom was coming in my house like a week after my fight, making me go out of bed to do abs in front of her. She's like "Your stomach works! Do abs right now!"

So I've been training, and just doing things that I can do and I'll be 100% very soon.

Anton: So do you have a target date for your return yet?

Anton: Were you able to get some projects lined up for your acting career during this break?

Ronda: I have a lot of very exciting projects lined up for next year, that I am not at liberty to talk about at this moment just yet. But yeah, if you thought this year was crazy, next year is going to be ape shit.

Anton: Recently, you've been to SummerSlam.

Anton: I thought it was pretty cool that the pro wrestling fans recognized you guys and were giving the four horsemen signs.

Ronda Rousey and Dana White had to answer some very "unique" questions from the Q&A in Hong Kong.

Check out photos from the UFC: Macau Red Carpet and Open Workouts

Ronda: I think it was one of the funnest days of my life. It really was. I had such a blast. Me and the girls don't really have much chances to go out and do stuff like that together. We always train together, we're always so serious when someone has a fight. The Four Horsemen were the greatest heel team of all time, and who did we run into when we walked in there, it was Ric Flair! I just died.

It was funny seeing the mutual respect between the two sports, because we were geeking out and were such huge fans of everyone there, and they were like big fans of us, so it was literally like a race to see if he or them could ask to take a picture first all day long. I put my foot in my mouth all night. I must have thanked Triple H and Stephanie McMahon the same way, like 12 times. I just kept giving them the same thank you speech repeatedly. They were all very very cool, and we got to give Stephanie McMahon her Ice Bucket Challenge so that was pretty cool.

Anton: Speaking of being a pro-wrestling fan, you started out your MMA career with 8 armbars. Obviously the situations differ from fight to fight, but in the back of your head did you ever think of wanting to extend that streak just to make it some sort of "finisher", or did you just want to showcase a more diverse skill set?

Ronda: I've always wanted to be a complete Mixed Martial Artist, and the armbars were from my time in Judo. What I first set out to do is to showcase how good Judo is in MMA. I've always felt that it has been greatly disrespected before, but I was amazed at how many times I've heard 'judo' even at the press conference (in Macau) tonight.

It's completely changed, how people perceive that art. I really feel a lot of progress have been made and that thing is done. People know that Judo is a sport that needs to be respected, so that mission was accomplished. After that, I was thinking of how I can make it more entertaining for the fans.

I just want more things that I can threaten my opponent with because that will open armbars more. Even when I was doing Judo, I was known as the armbar girl for a while, and because people were so scared to get armbarred, it made it really easy for me to pin people, and I was pinning people more often. Now, it's gotten to a point where a lot of people are so scared to clinch with me and get taken down and end up on the ground, and it opens up all these striking.

"If people want to pay me as much as what I get paid in the UFC to go roll with them, I'd go do that too!" -Rousey, responding to BJJ champions

The reason why I was able to TKO Sara McMann was because she was so preoccupied with not being thrown, and keeping those underhooks, so she didn't even think about getting hit in the body at all. Same thing with Alexis (Davis). She was so concerned with not letting me get close enough to grab her, that she wasn't really thinking about a real strike coming her way.

But that said, I walked out of the Octagon on my last fight with a huge gash at my hand, and my mom, she just looks at me and says, "you should've armbarred her, and you wouldn't have gotten hurt yourself". So I was like "thanks mom!". (Laughs)

Anton: That kinda made my job harder, because when I make predictions for your fights, I'd always just write "Death. Taxes. Ronda Rousey by Armbar." and I guess I can't do that anymore.

Ronda: (Laughs) Yeah, I don't know, but it's not my job to make your job easier! (Laughs)

Anton: A few months ago, you said you 'can beat any BJJ girl in the world' while trying to defend Judo as a sport, but a lot of BJJ Champions seemed to have taken offense to it. Have you seen their responses?

Ronda: No, I haven't seen their responses, and I'm not going to look for it. If people want to pay me as much as what I get paid in the UFC to go roll with them, I'd go do that too! But I've got movies, I've got fights, and I just don't have the time to put in a grappling training camp. They're only upset because they think they can beat me, so why shouldn't I be just as upset at their opinion thinking they could beat me? Why are they so much more entitled to their opinion than mine?

One of Tyron Woodley's family members then goes "I'm going to say Amen! to that."

Ronda: YEAH! You can be my hype man in the back! (Laughs) 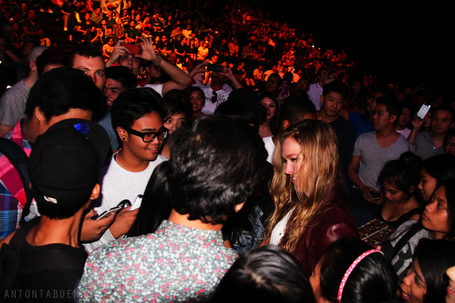 Rousey meeting with the kids from Macau's 'Be Cool' foundation

Anton: Okay, switching gears again, Gina Carano, what do you think of that match up?

Ronda: I think Gina is the worst style match up for me actually. One of the reasons why I've been so excited to fight her, was because she has that feeling of distance, and that feeling of timing, and mobility to put those touches in her punches where she has that one punch knockout power.

There's a lot of other girls that they're strong, but they don't have that feeling. So they overwhelm people and they only get TKOs. There's none of that one punch knockout power, and that's the kind of thing that you don't lose. It's that kind of thing that stays with you even if you take time off. I think styles do make fights, and style wise, Gina is the absolute worst match up for me. That's why I've been wanting to fight her for a while, because she could be one of my biggest challenges.

Anton: Do you think she can make 135 lbs though? Or would you be willing to fight her at a different weight?

Ronda: She's been the one insisting on fighting at 135, so yeah, I would love to fight her at 135. I prefer that, definitely. I feel like there's where I'm at my athletic peak.

Anton: Speaking of, how much weight do you cut, and how heavy do you weigh in when you rehydrate after?

Dana White, motioning to Ronda as he walks by, "C'mon, let's go."

Ronda: I'm sorry, I guess I gotta get out of here. Thank you for your time!