Michael Bisping talks about various topics such as Cung Le, returning 'too soon' from eye injury, competing internationally, and his 3-step plan for that elusive shot at UFC gold.

Not one to mince words, Michael Bisping has had a lot to say about his opponent during to the build up to their UFC: Macau headliner this weekend.

"I'm not a Math teacher, I'm a born fighter," the Brit exclaimed as he spoke about Cung Le's impressive win over Rich Franklin. "On Saturday night, Cung Le will be in a real fight. I will kick him in the head, I will punch him in the face, and I'll repeat that process until he falls over."

"He kicks hard and kicks well, but he has a limited arsenal, and he's very predictable," he continued. "I am at a completely different level. I have been knocking out guys in training. I don't mean to do that, but a lot of people have got hurt during the lead up to this fight and Cung Le is next."

As one of the catalysts of the sport's growth in Europe, Bisping also considers himself as an ambassador to the sport internationally. As he competes in yet another continent, he also downplays any ill effects of having to travel half way around the world to fight.

"My whole career, I've fought internationally for the UFC -- Australia, Canada, Brazil, England -- so I'm used to this. I think when people bring up (jet lag or travel) when they lose, it's an excuse," he states, "Regardless, I'm a professional sportsman so I'll make sure I'm prepared and for this fight, I'm fully prepared."

"I cut from 200, which is why I've been drinking all this water this week to flush my system," Bisping said as he talks about his last minute preparations. "14 lbs, then I'll probably go into the cage around 203 or 204." 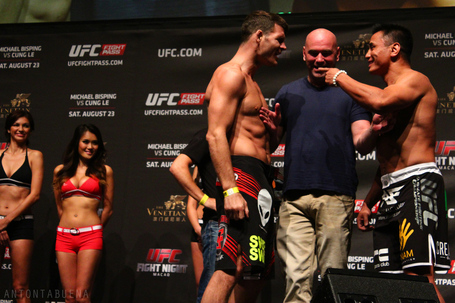 Bisping made the middleweight limit for this fight, and while he says everything is firing on all cylinders now, his last fight didn't exactly go his way as he was controlled by Tim Kennedy en route to a unanimous decision.

"I had a year off. I had some problems, so I took a year out," he says of his time off from retina surgery, "Then I was doing some TV stuff for England for a month, and then I went to Thailand and filmed a movie for a month. I got offered a fight 6 weeks later, and I haven't trained in a year."

"I took a big fight on 6 weeks training and that's what went wrong really. The guy had a game plan, and I came back too soon. I should've took a few more months to train in the gym, but you know, that's my excuse."

"Now, everything is all good, and Cung Le is going to get his butt kicked. Tim Kennedy got lucky that night, but next time he wouldn't be so lucky."

The fight against Kennedy may have left a bad taste in his mouth, but Bisping is also targeting a future date against another middleweight who will be cageside watching intently.

"I know Luke Rockhold is here. I think he's a great fighter. More power to him, and I'm very happy for his success," Bisping says as he prefaced his comments on the Strikeforce champion, "But I think he should stop crying like a little baby, and get over it. I said something that offended him several years ago, and he's still crying and whining, and nobody cares."

"After beating Cung Le on Saturday night, I'll beat Luke Rockhold. I'll shut him up once and for all, and after that, I'll fight for the title," Bisping said as he laid out his immediate plans.

Le may feel that Bisping is looking past him, but 'the Count' certainly doesn't see it that way. He's confident in his ability, but ultimately knows he will still have to back everything up when he takes that first step towards that goal.

"I truly believe that no middleweight can beat me on Saturday, let alone Cung Le. I think I'm one of the best guys in the world, and to prove that, I will have to win these fights."