War Machine: 'When I am ready to die I will kill many and then kill myself and I will tape it'

As the hunt for Jon Koppenhaver continues, more harrowing and potentially foreshadowing old tweets of War Machine's are resurfacing.

Share All sharing options for: War Machine: 'When I am ready to die I will kill many and then kill myself and I will tape it'

Former UFC and Bellator fighter Jon Koppenhaver, better known as War Machine, remains on the run from authorities following an alleged gruesome and near fatal beating of his ex-girlfriend Christy Mack. Koppenhaver is wanted on 7 charges issued by Las Vegas police and there is currently a $20,000 reward for his capture. Over the past few days there have been several of his older tweets and interviews with MMA media that have popped up, including this very scary November 2009 remark on Twitter, where he talked about filming a mass killing and his own suicide:

When I am ready to die I will kill many and I will then kill myself and I will tape it. It will be rad.

Here's a screenshot just in case the embed no longer works: 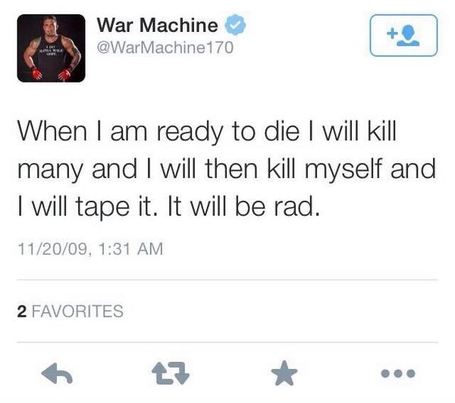 Here's War Machine and Christy Mack on The MMA Hour in 2013:

Hopefully Koppenhaver will be caught as soon as possible and that his five-year old fantasy never gets a chance to become a tragic and sickening reality. This also isn't the first time he's openly discussed suicide on social media, as evidenced by this November 2013 quip:

When I do kill myself there better not be any priests or praying at my funeral...better not even be a funeral.