Christy Mack is telling her side of the story and it's very ugly including 18 broken bones around her eyes, 2 broken bones in her nose, a ruptured liver and more. She says she expected to be killed by War Machine and fled the house when he left to get another knife from the kitchen after he broke the first one.

There's bad and then there's worse.

What we already knew about the alleged assault by War Machine (formerly Jon Koppenhaver) on his ex-partner Christy Mack was deeply unpleasant, but even knowing of his criminal record, her statement about the extent of her injuries with photos of her battered face and body is shocking.

According to her statement (image of full text is below), she and Koppenhaver broke up in May. She alleges that he appeared at her house at 2am Friday morning and found her and a friend "fully clothed and unarmed" in the house.

"Without a single word spoken he began beating my friend," she continues and goes on to detail a horrific assault that she feels she only survived because she fled the house when he went to the kitchen to get another knife.

Added below are the graphic photos and story about what happened pic.twitter.com/U1T1X2OP4d 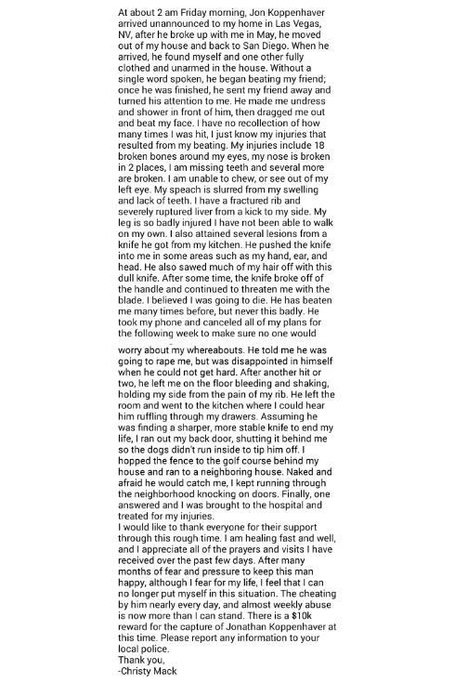 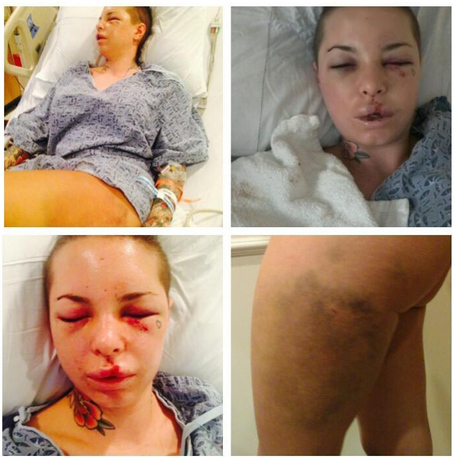 She closes the statement by announcing that there is a $10,000 reward for the capture of War Machine/Koppenhaver who currently remains on the loose.

Contrast Mack's statement with War Machine's attempts to blame the victim and excuse his own behavior in his recent tweets.