Apparently on the run, accused of assault against his significant other Christy Mack, the former UFC and Bellator fighter has taken to twitter to make his case.

War Machine, the former Jon Koppenhaver, who's being sought by Las Vegas authorities in the assault of his long-time girlfriend Christy Mack, has taken to Twitter to speak his peace.

Here's what the man has to tweet for himself:

I'm not a bad guy, I went to surprise my gf, help her set up her show and to give her an engagement ring and ended up fighting for my life.

The cops will never give me fair play, never believe me. Still deciding what to do but at the end of the day it's all just heart breaking.

I only wish that man hadn't been there and that Christy & I would behappily engaged.I don't know y I'm so cursed.One day truth will come out

Here's a screen grab for when he deletes them: 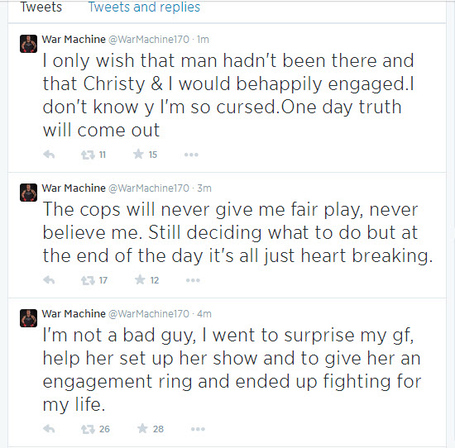 Meanwhile the victim is allegedly so badly injured she can barely speak which is slowing the investigation of the case.