The drama continues as arrested former Bellator fighter War Machine tweets some accusations against his alleged victim and she denies them.

Share All sharing options for: Bellator explains why they cut War Machine this time, War Machine & Christy Mack both comment on social media

Good morning! Here's something sordid and awful to have with your coffee.

We posted Friday about War Machine's (latest) incident of being wanted by police in an alleged assault and Bellator's decision to dismiss him from the promotion.

BE alumni Matt Roth asked Bellator officials why War Machine was cut this time, but not last year when Christy Mack made assault allegations. He also asked why Bellator signed heavyweight Brett Rogers after Rogers served a 60 day sentence for assaulting his wife.

Bellator's Anthony Mazzuca's answer was as straight-forward as it is elegant.

"Simply put, under new management comes new procedures and policies," he replied in an email to Roth.

So that's the good part. Here's some tweets War Machine posted and then deleted (via MMA Mania) in which he claims to be "heart broken....in all ways." Reminds her of his undying love and then insinuates that he "surprised" her by coming home early to "help you set up for your convention." He doesn't say what he found, he just makes it clear that he's blaming his victim. 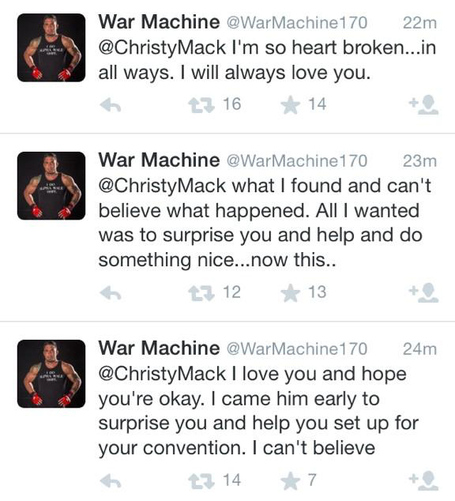 For her part Mack is denying it. Here's more of Mania's excellent coverage of this major story:

While rumors have been running rampant on social media, Mack denies that she was caught "banging some MMA fighter" behind War Machine's back, but has yet to come forward with details of what actually transpired. That's not unusual in cases like this, pending charges and a possible lawsuit.

@AmberLMatthews actually, that's not a fact.

Now you should be caught up enough on this important story to go about your business.