Note: This series is supplemented with a second series called Fighting Chance where I explain the entire design of this model, as well as considerations that should go into gambling, such as methods to calculate the correct amount to wager, my vendetta against the term MMA Math, and why I’m even doing this in the first place. A brief explanation of what the symbols in these figures mean is given here.

I am owed an event this weekend. Because I don’t have an event, I am forced to sit on the sidelines, imagining what winnings I could have gained, believing that all of my choices would have been underdogs and the payoffs would have been massive. Instead what I will do today is take you on a journey of statistical evaluation of the fighters, and take a stab at what the odds would have been on the fighters I picked. Today, we will all be winners! 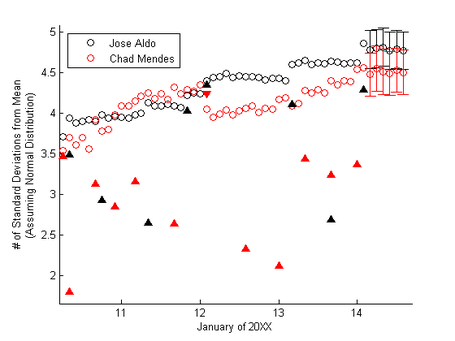 Both of these guys are at the very top of UFC rankings, but what makes this really interesting is how close these fighters really are to each other. I believe that similar to Cain Valazquez and Junior Dos Santos, these two fighters could end up defining each other and the division. But the model has no opinion on these sorts of things, so let’s see if we can get some good info here.

The data shown goes back to 2010, but looking at the fights when these two squared off in January of 2012, there’s quite a bit to see. I wouldn’t exactly say that Chad Mendes has been fighting cans since then, but the first two fighters were Cody McKenzie and Yaotzin Meza, not exactly rocks to build your comeback on. In 2013, Mendes bumped up his competition to Darren Elkins, Clay Guida, and Nik Lentz, but these fighters do not compare to Frankie Edgar and Ricardo Lamas, and the model reflects this discrepancy.

Knowledge outside of the model includes the fact that Mendes’ teammate beat Jose’s teammate in a fight that substantially bucked the prediction of the model, and expectations of the public as well. However, I think that many gamblers will over play this fact. Not to a level that would make Aldo an underdog, but giving him a much juicier return than he deserves. I would guess I get him at 1.35 should I be interested in investing, and even though it’s close, I believe I would place a wager here. 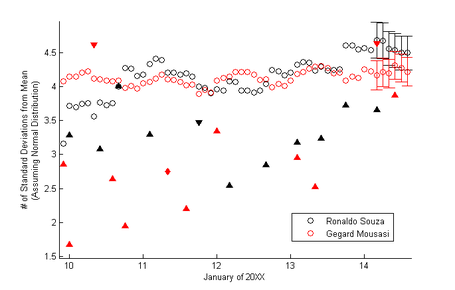 Another pair of fighters near the very top of their division, Gegard Mousasi and Ronaldo Souza should make a very interesting fight indeed. Mousasi, as one would expect from his disciplined fighting style, performs very predictably, losing the fights he is supposed to lose and winning the fights he is supposed to win. (The diamond in early 2011 indicates a draw with Keith Jardine.)

Jacare is not so consistent. He lost in late 2011 to Luke Rockhold, which is understandable now, but the model didn’t pick it up. In late 2010 and mid 2011 he won two fights against Matt Lindland and Tim Kennedy that the model believed he was to lose. They were not upsets, but still a strong indication that observing past trends does not mean one can always predict the future, and behavior like this can make one jumpy. However, despite the difference of their respective rankings just barely allowing for a wager, I feel calm putting down on Jacare. With the recent damage he’s done to the division, I don’t think I’ll be alone and I’m guessing I’ll see 1.20 to 1.30 return on my investment. 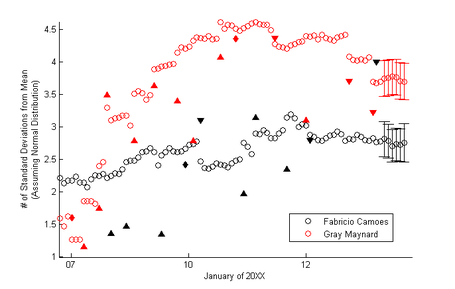 This is a fight that a broader picture needs to be viewed. At first glance we appear to have a squash match forming with Gray Maynard having a substantial advantage of Camoes, but we also have a very stark example of a fighter in decline. Maynard’s last fight cost me money and I don’t easily forgive people who lose fights they’re supposed to win.

Beyond that, Gray Maynard has now lost three fights he was supposed to win according to the model. The first was Frankie Edgar, the second was TJ Grant, and the third was Nate Diaz. When a fighter is in decline it is fast and with little warning. This is now three fights that indicate a decline, and while Camoes is being handed to Maynard on a platter, I don’t have faith that he’ll walk away with the win. No Wager. 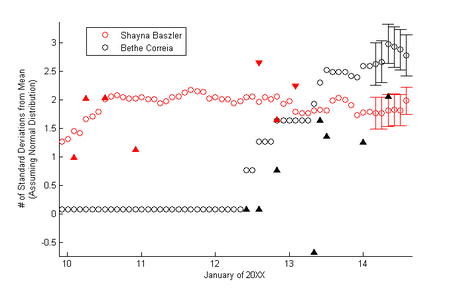 This is another fight that looks obvious, but doesn't make me happy. First off, interesting factoid: Baszler has been fighting since 2003. For women’s MMA, that is very impressive, but I bring it up because Correia has only been fighting since 2012. Baszler’s longevity does not concern me at all, but Correia’s relative "noob" status does make me concerned on if I’m willing to place my money on her.

This is actually a concern throughout all of WMMA at the moment, and is just part of the growing pains that the experience isn’t there yet for many if not most of the fighters. The difference between female fights and the rest of the UFC can be very offputting when you have Jessamyn Duke with three actual fights with results to her name before losing to Correia and pumping up her record. Every fight in WMMA seems to have someone who’s undefeated and has only fought others who are undefeated, making for a true understanding of where these women are ranked vary challenging. I think this will start to get "shaken out" over the next two years, but for today, I’ll pass. No Wager 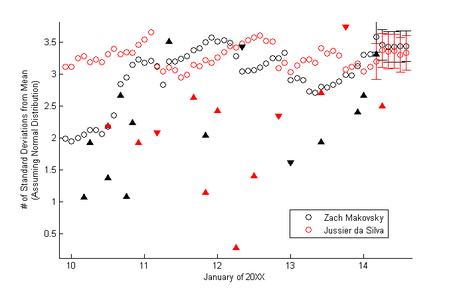 Not much to say about this fight. We can start with just saying no wager. After that, the discussion moves to that both of these fighters are obviously very talented, but da Silva appears to have found a very consistent niche of just below the elites of the division, while Makovsky could be much better, but hasn’t been able to put it together. In early 2012, Makovsky lost to Eduardo Dantas, which is completely understandable, but he then ended 2012 losing a split decision to Anthony Leone which gutted his momentum at the time, and with two losses in a row, the model made him pay.

This loss was just over a year and a half after Makovsky beat Chad Robichaux by knockout. If you haven’t heard of Robichaux, just know that this guy is a badass Marine who seems to be outright allergic to letting fights go to the judges’ scorecards. Regardless, if I was a betting man, I’d look at Makovsky, but as an investment, no wager.

That’s it for the main card. For the rest of the events we have James Vick with only five fights, and while he’s obviously dangerous, the model doesn’t play games with so little information to go off of. Lorenz Larkin was an obvious pick to beat Derek Brunson despite his recent two loses. Bobby Green would have gotten me paid, as I believe the betting public would have gone heavy on Abel Trujillo, and even before Green’s recent win over Josh Thompson, Green was well ahead of Trujillo in the rankings. Danny Castillo would have been a possible, but not heavily confident pick over Tony Ferguson, and I honestly don’t know where the gambling masses would have landed on this fight. Beneil Dariush is too green to feel confident in him acting predictably so his fight against Tony Martin is a wash. Finally if I was feeling a bit aggressive, I’d put a couple of dollars down on Alex Garcia over Matt Dwyer, but Matt Dwyer’s only lost one fight which makes it very challenging to feel confident in the model for having found his upper limit correctly, and the wise investor in me may pass until the next time either of these two fight.

Thank you for joining me on my imaginary victory lap this week. I usually don’t get to wager on that many fights in an event, so it makes me even sadder that this event never was, but we have Fight Night coming up in just over a fortnight, and at that point there will be actual wagers to make! See you then, and be sure to check out my upcoming articles in Fighting Chance!