Asian MMA: After over a decade in a ring, URCC re-launches in a Cage

After over a decade of hosting shows using a ring, the Philippines' URCC has decided to make the switch to the cage.

Share All sharing options for: Asian MMA: After over a decade in a ring, URCC re-launches in a Cage

Thursday night in Manila, a 'new look' Universal Reality Combat Championship re-launched to unveil a switch in fighting surfaces. Three professional bouts were showcased at Republiq, and it acted as a 'teaser' for future events from the longest running promotion in South East Asia.

The promotion has constantly produced Asian stars such as Eduard Folayang and Eric Kelly, along with UFC fighters Mark Eddiva, Roldan Sangcha-an and Dave Galera. They compete in the cage for most of the international events, but when they competed for the URCC at home, it had always been in a ring.

Alvin Aguilar, the URCC's founder and promoter, has long been a proponent of having fights in the squared circle, stating various reasons in the past, including a belief that rings tend to produce the more exciting bouts. Fast forward to 2014, and they've finally made a switch with all future cards to be hosted in the cage.

"I had to prepare all of our fighters because we are going to be sending them abroad. If they're not used to fighting in a cage, then it might be a disadvantage. That's the only reason why," Aguilar told Bloody Elbow, "As I've said, we have to showcase Filipino Mixed Martial Arts to the world, so no more adjustments. I want them to go out there and kick ass without having to make any adjustments to the cage."

The 3-fight line up was part of their re-launch party which was showcased in front of a packed audience in one of the city's most popular clubs. They've had almost 60 events in a ring to date, but during their first time in a cage, fighters such as MJ Abrillo were already getting acclimated, even pushing off the cage to try and land strikes he never would've been able to pull off in the past. 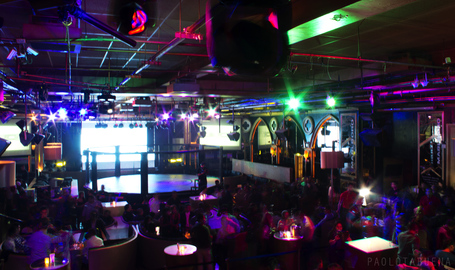 This was the promotion's 2nd smaller 'fight night' type of show for 2014, with their last numbered event being on November of last year.

"The reason why we haven't had any major events during the first part of the year, is because we've been doing the same thing, going around the provinces on all these events. Now, I want the URCC to be way way waaaay bigger than it has ever been," Aguilar exclaims, "Of course, that needs a lot of preparation, a lot of people to meet, and I've had to pool some resources. But here we are, and this is the start."

"The next few weeks, we will be constantly having announcements. We've got a very successful launch tonight, but this is just the start."

As we're told, their next major event, URCC 25, is targeted for September.