Who did the right thing while beating B.J. Penn: Edgar or MacDonald? MMA 3 Way

In this MMA Tete-A-Tete, Kid Nate, Eugene S Robinson and Dallas Winston look at various UFC happenings thru the lens of the Golden Rule and/or an eye or an eye. Who did right by BJ Penn: Edgar or MacDonald? What about PED users like Chael Sonnen, are they breaking the Golden Rule or not? Plus eye gouging, head stomps, beating after the bell and more.

Share All sharing options for: Who did the right thing while beating B.J. Penn: Edgar or MacDonald? MMA 3 Way

As much as we complain about too many UFC events, without one coming up this Saturday, Eugene S. Robinson, Dallas Winston and I were struck by the horrible horrible freedom of talking about whatever we wanted to on this week's MMA 3 Way.

Then I came across this appalling tale and voila! We had our topic.

So we chose to look at some recent and not so recent MMA/UFC events through the lens of The Golden Rule ("Do unto others as you would have them do unto you") which minutes of research on Wikipedia tells me is actually derived from the older "Eye for an eye, tooth for a tooth" of Hammurabi.

Troubles with the video player? Watch it on YouTube.

Here are some of the seminal MMA/UFC happenings discussed:

As always subscribe to MMA Nation on YouTube to ensure you don't miss any of the magic.

Oh and John Nash passed along this awesome illustration from the old Davy Crockett illustrated of the hand of an experienced gouger from the old frontier fighting days: 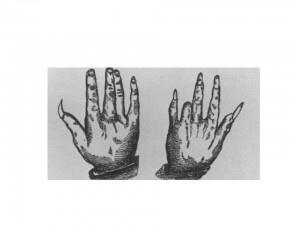 Read the original account of a "Rough and Tumble" fight here (I got the name wrong in the video of course).