BE's striking specialist Connor Ruebusch and his girlfriend Brittany make picks for every fight on the UFC 175 card. Sexiness or deadliness, which is the better prediction criterion?

Share All sharing options for: Sexiness vs Deadliness: UFC 175

Welcome, friends, to the fourth edition of Sexiness vs. Deadliness in which I and one of the many (not really) ladies in my life make fight picks for an upcoming UFC event. She picks fights based on the attractiveness of the fighters, and I make picks based on analysis of their fighting skills. The other installments in the series, as well as every episode of Heavy Hands, the only podcast dedicated to the finer points of face-punching, can be found here.

In our last contest, my girlfriend Brittany and I picked for UFC 169. I hung on to the lead by the skin of my teeth, picking only 7 of the 12 fights correctly, while Brittany managed 6 for an even .500 average. After four events, the total scores stand at:

I don't know if I can live it down if my analytical skills are undone by facial symmetry and washboard abs, and with only a 3-fight lead, Brittany could very well overtake me if my picks aren't on-point. Let's hope I can pull off the win for Saturday's pay-per-view event.

We will start with the first preliminary fight and work our way through the card. The included photos, from UFC.com, are the ones that Brittany used for her picks. 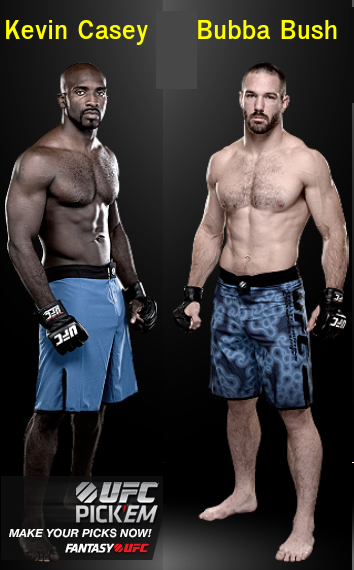 Brittany: If you look closely, you can see a face in Casey's midsection-- nips for eyes,  the shadow of the abs a regal nose, and the belly button a small, pouty mouth. If you look for a face in Bush's torso, you see some strange sort of alien... like Preed from Titan A.E. Casey by kick to the Squeedly-spooch.

Connor: It is at this point I realize what introducing my girlfriend to MMA has done to her. The ultra-violence of such a dynamic combat sport has reduced her to seeing cartoon aliens in men's abdominals. Fortunately, there shouldn't be much violence in this fight. In fact, I have a feeling that Bush will win a nice, boring decision. Bubba Bush by Unanimous Decision. 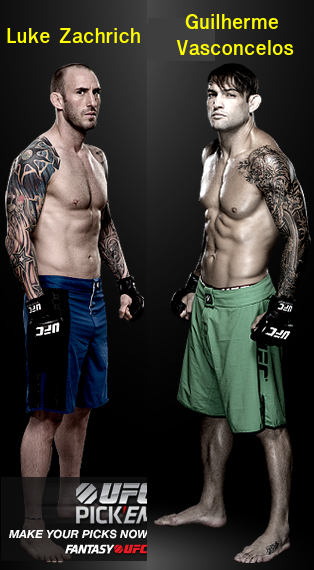 Brittany: Vasconcelos looks like the least popular member of Fall Out Boy, while Zachrich looks like the roadie who would rather be working a Metallica concert. Tell that Guilherme he just made my list of things not to do today (or ever). Zachrich by Creeping Death.

Connor: I've got to root for Zachrich here, given the fact that he hails from my home city. I don't know that he's good enough to beat Vasconcelos, but I can certainly see the massive experience gap playing its part and earning Zachrich his first UFC win. Luke Zachrich by Unanimous Decision. 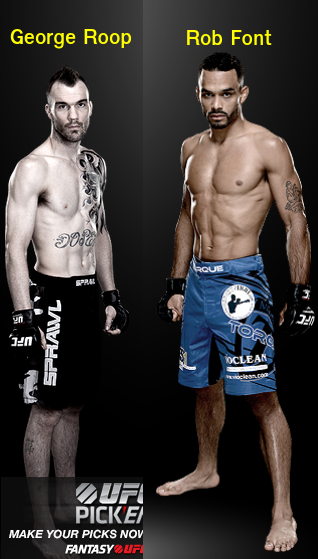 Brittany: I don't always make sexiness picks based on last names, but when I do, it's becuase both of the fighters are entirely unappealing. Roop, because every time I say Roop I start singing "Shoop" by Salt-N-Pepa.

Connor: At six-foot-one and 135 lbs, George Roop looks like a guy purpose-built for getting knocked out, and he lives up to that hype just about every time he fights anyone willing to get in his face and throw heavy leather. Okay, that's not fair. In truth, Roop is just crafty enough to beat a come-forward puncher about half the time. The good news for him is that Font is less Cub Swanson or Francisco Rivera, and more Brian Bowles. Font has potential, but Roop will likely spend the rest of his career knocking off prospects just like him. George Roop by TKO, round 3. 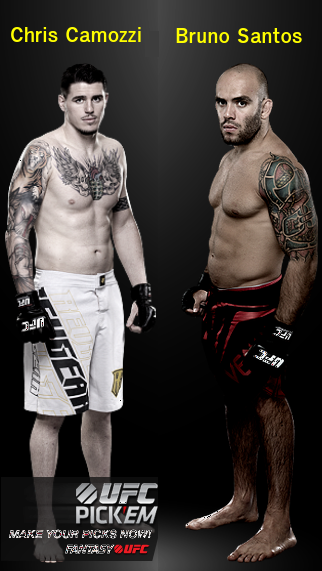 Brittany: Looks like "Carioca" should go easy on the tapioca... or at least check the ingredients. By the looks of that ab-laden belly, there's more than just vanilla in Santos' pudding. Camozzi, meanwhile, has the Dread Pirate Roberts mustache going on, and I like that in a man. Camozzi, because if I ask him to win he'll say "as you wish."

Connor: Bruno Santos will struggle to beat a fighter of Camozzi's calibur if he tries to fight the way he always has. That seems eminently likely, as the stifling wrestler hasn't shown much predilection for anything else. Camozzi's no world beater, but he's a stiff test for this prospect, one that I don't expect Santos to pass. Chris Camozzi by Unanimous Decision. 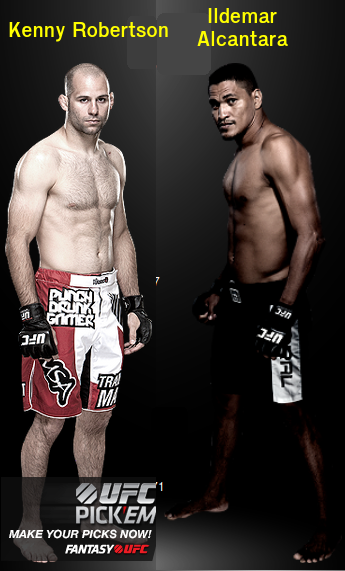 Brittany: Alcantara is clearly not taking his upcoming bout very seriously since he's in the middle of the Cha-Cha slide (Right foot let's stomp!) and Robertson is having none of it. Robertson by electric slide.

Connor: I desperately want to pick Kenny Robertson, because he's a slick, exciting submission grappler with an indomitable will to win. Unfortunately, I just can't. Against Alcantara, I think Robertson will be revealed for what he is, which is a throwback to a bygone era of MMA. Alcantara is not only skilled, but athletic and strong. Robertson has great technique, but it's all he has, and that's no longer enough in the modern-day UFC. Ildemar Alcantara by Unanimous Decision. 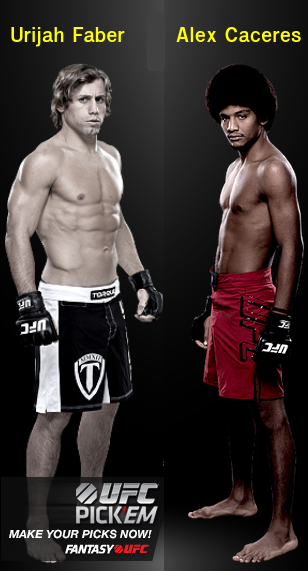 Brittany: Based on the photos, this doesn't look like it's going to be a fair fight or a fair sexiness match-up. Caceres looks like an asparagus from Veggie Tales, and judging by the look on Faber's face, asparagus is his least favorite vegetable. Faber by bacon wrap and even grilling.

Connor: I hate this fight, though I understand why it was made. Caceres is a seriously hot prospect who needs to be brought along gently to reach his true potential. Faber is known for many things, but gentleness is not among them. Barring a spectacular and prodigious performance from Bruce Leeroy, Faber should take this one with relative ease. Urijah Faber by Submission, round 2. 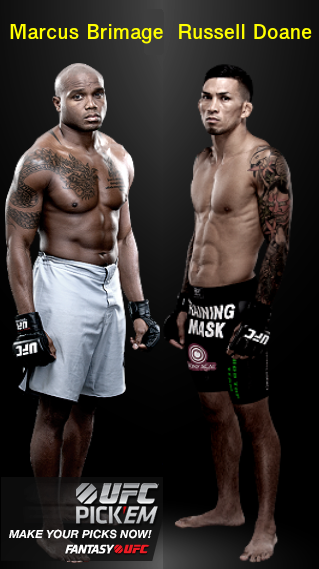 Brittany: Brimage's sexiness is over 9000 and Doane clearly needs to spend some more time in the hyperbolic time chamber if he hopes to survive round one. Brimage by Spirit Bomb (prepared the day before, of course).

Connor: If you can overlook the fact that this is nowhere near being a pay-per-view main card fight, it's actually a really interesting matchup. Brimage has proven to be quite adept at shutting down movement heavy fighters (except Conor McGregor), while Doane is as well rounded and scrappy as you expect any Hawaiian to be. I expect Doane's experience and polish to pay off, but a Brimage victory wouldn't surprise me in the slightest. Russell Doane by Split Decision. 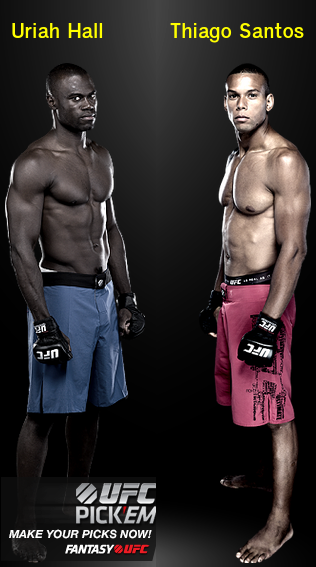 Brittany: I think Thiago Santos needs to have his implants replaced. Hall by boob punch.

Connor: Meh. Uriah Hall by something, or nothing. 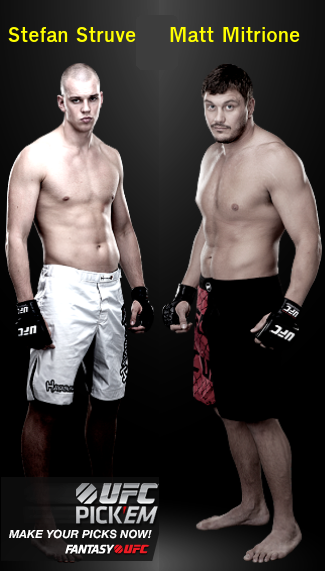 Brittany: Contrary to popular belief, the "duck lips" look makes people want to punch you in the face, and Mitrione's smug eyebrows suggest that he's eager for the chance. Mitrione by photobomb.

Connor: Yeah, yeah, Struve's been out for over a year with some pretty serious medical issues, and he does have a tendency to get hit... a lot. But since when has Matt Mitrione been able to beat anyone but lower tier heavyweights? An awful lot of folks are expecting Mitrione to just walk up and knock Struve out. Let us not forget that Struve KO'd Stipe Miocic with a brutal uppercut just last year, and we all talk about Miocic like one of the best boxers in the division. He's certainly a smoother boxer, both offensively and defensively, than Mitrione. Struve could be in bad shape after his layoff, but I just don't think Mitrione is skilled enough to put him away even on a bad day. Stefan Struve by TKO, round 2. 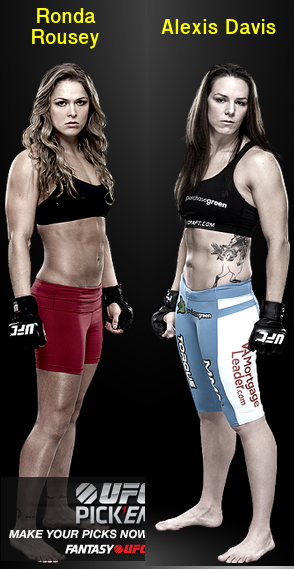 Brittany: In my youth I used to debate whether women could be both sexy and cute. Now I wonder: Can women can be sexy and shit-your-pants scary at the same time? Yes. Yes they can. Ronda Rousey by sexy scary arm bar.

Connor: Sara McMann is still probably the toughest matchup for Rousey out there. I just don't see what Alexis Davis could possibly do to beat the arm collector. Even when she wins she does so in close-fought battles, whereas Rousey specializes in one-sided beatdowns. Like most Rousey fights, this one's an easy call. Sorry Alexis. Ronda Rousey by Arm Bar, round 1. 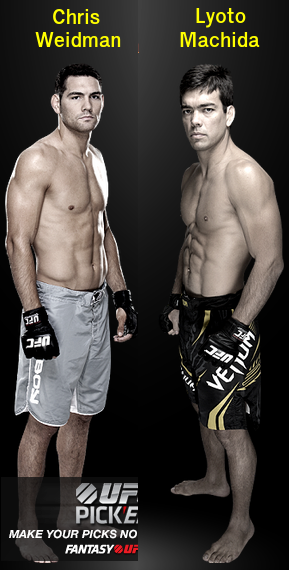 Brittany: This fight is gonna be an all you can see sexiness buffet. Machida, with his bronzed limbs and stack of tilde abs; Weidman with his broad shoulders and reinforced steel shins... It's close, but I have to give the sexiness pick to Weidman. It's no secret that Connor has a huge crush on Machida, so I leave it to him to stroke his-- er-- ego. Weidman, by 'MURICA.

Connor: I have absolutely no idea who to pick. I keep going back and forth on this one. I will, however, use this paragraph to express a controversial opinion: I think Lyoto Machida is, and has been for quite some time, better than Anderson Silva. Had Machida faced the same lineup of non-strikers that Silva did during his reign as middleweight champ, I have no doubt that he would have beaten them all. The question is, is Machida better enough than Anderson to beat Weidman? Because Weidman absolutely crushed Anderson in both encounters, and looks to be an incredibly coachable, adaptable fighter. Both men are set to fight the most disciplined, challenging opponents of their respective careers, and I can't wait to see it. My aforementioned Machida crush forces me to pick the Dragon, but I don't feel very confident in that at all. Lyoto Machida by Unanimous Decision.