Lyoto Machida knows exactly how to get inside your head and make you do what he wants. BE's striking specialist Connor Ruebusch breaks down how the Karate master reads his opponents so well.

Control is a funny thing. How many fights have you seen screwed up by judges who thought an aggressive, forward-moving fighter controlled the bout, even when his opponent walked him into counters all night long? On the flip side, how many slicksters have you seen get beat up and win just because their opponent missed as many punches as he landed? The truth is, control has less to do with physicality--who's moving forwards or backwards, who's throwing or who's evading--and much more to do with mentality. He who forces his opponent to react to him controls the fight. Even if his opponent doesn't realize it.

In yesterday's article on how to dethrone middleweight champion Chris Weidman, I mentioned that Weidman is himself a prolific user of feints. He uses constant movements to find openings and force his opponents back into the fence, where he can corral them into strikes or take them down. Weidman is not particularly fast, but his ability to seize the initiative and keep his opponent on the defensive allows him to time his strikes and takedowns perfectly. Thus, an opponent of Weidman's needs to out-feint him to beat him.

Enter Lyoto Machida, arguably the best feinter in all of MMA. Much has been said about the sheer variety of feints that Machida employs--from hip shimmies, to eyebrow shrugs, to outrageous hand movements reminiscent of 52 Blocks--but at its core Machida's feinting game is very simple. He will usually take a small step forward, letting the sudden speed of his movement and the sound of his foot slamming into the canvas startle his opponent into swinging at him.

Sometimes they react, and sometimes they don't. The beauty of Machida's style is that it doesn't really matter either way. Observe. 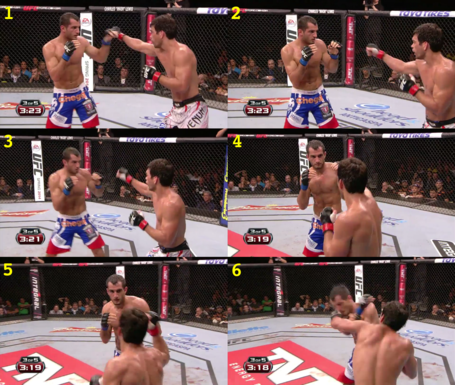 1. Machida paws at Mousasi's lead hand with his own, trying to bait a punch.

2. Again, and this time Mousasi doesn't even reach out to check the jab.

5. Once more Machida feints, and this time Mousasi does nothing.

6. Unfortunately for him, Machida was looking for him to ignore the feint again, and he is an easy target for Lyoto's left straight.

Here, Machida wants Mousasi to react to him offensively. Throughout the bout, Mousasi had looked to parry his lead hand and come over the top with a long jab, so Machida tempts him into doing so by constantly feeding him that hand. When Mousasi stops reacting, and instead begins stepping closer and closer with every pawing jab Machida throws, it becomes clear that something more dramatic will be needed to draw an attack out of him.

Gaps in the Armor: How to beat Chris Weidman

Lyoto Machida has a mighty task ahead of him as he prepares to face UFC middleweight champion Chris Weidman at UFC 175. BE's striking specialist Connor Ruebusch breaks down what Machida will need to do to beat the champ.

Lyoto Machida faces the unknown in the dangerous but unproven Gegard Mousasi in a bout that could earn him a shot at the middleweight title. BE's striking specialist Connor Ruebusch breaks down the unique rhythm Machida will use to find openings.

Of course, Mousasi refuses to be countered. He reacts to the first feint by skipping back out of range, and barely flinches at the second, indentical movement. He is looking to attack, but on his own terms. Rather than attacking when Machida moves, he wants to strike first and make Machida react to him. Of course, refusing to react is a reaction in its own right, and Machida rightly determines that, if Mousasi isn't even going to move in response to the fake punch, he'll likely be wide open for a real one. His final feint is merely the beginning of a real attack, which he cleverly aims slightly below and to the right of Mousasi's head, causing the Dutchman to slip right into it.

And of course, a punishing result like this ensures that Mousasi will react to feints in the future. It's a deadly cycle.

Since Machida's game is based on reacting to his opponents, some have attempted to use this exact tactic against him. If Machida ignores a feint of an attack, doesn't that mean he also is open for the real thing? 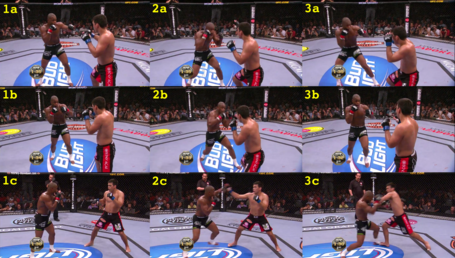 1a. Machida and Evans circle one another.

3a. Both fighters reset.

1b. Rashad waits on Machida once again.

2b. And once again, he reacts to Machida's feint with a feint of his own.

3b. Both fighters reset again.

1c. A second later, Machida has his plan.

2c. He feints again, and Rashad bites on this one, thinking he has an opening for the right hand. He takes a big step forward, preparing to throw a big punch...

3c. ...and runs face-first into a straight left from Machida before his arm can even extend.

These three sequences, one after the other, reveal the fantastic depth of Lyoto's understanding of martial arts. Rashad, seeing that Lyoto does not react to his counter-feint, thinks he's found an opening. His expectation is that Machida will not react to a real cross until it's too late, just as Mousasi failed to recognize Machida's straight left in the previous example above. The difference between Rashad's attempt and Machida's own is that Rashad is not leading the dance. Every feint he throws is a reaction to one from Lyoto. When he thinks he's spotted his opening, he's actually walking right into Machida's trap.

Evans and trainer Greg Jackson made the ill-advised decision to try to out-counter Machida, and ended up highlighting the difference between a guy with fast hands and good timing, and a true counter fighter. Above, both men are trying to intercept the other's attack, but Rashad is simply waiting for Machida to move before moving himself. Meanwhile, Machida is forcing Rashad to make those movements. While Rashad waits for Lyoto to make a mistake, Lyoto is making Rashad screw up.

Rashad's version of counter fighting has him waiting on Machida to move so that he can counter him. Meanwhile, Machida isn't waiting at all. He's creating the opportunities he needs. Counter fighting requires excellent reactions, but a good counter fighter anticipates the openings for his punches.

Most of Machida's success is built on this kind of feinting. And then there are the good old-fashioned mind games. Machida often gets in his opponents' heads by simply bugging them. If you're ever fighting Lyoto Machida and he starts doing something weird right in front of you--run. Here's a fun little sequence from the Mousasi fight. 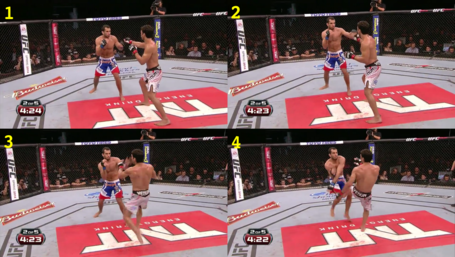 2. Mousasi, seeking an opening for his excellent jab, slaps the right hand down.

3. Machida brings the hand back up, right in Mousasi's face--what else can the Dutchman do but slap it down again.

4. Suddenly, Machida unloads a heavy inside leg kick that Mousasi can't react to in time.

Machida draws Mousasi's attention to his hands, and causes him to forget about his legs altogether. The left kick has become an increasingly important (and powerful) weapon in Machida's arsenal as he ages and continues to develop his game. It regularly lands because the opponent is, justifiably, concerned with Machida's hands. Normally this means getting the opponent to worry about the straight left, and then throwing the left kick instead when he steps back out of punching range. But, as you can see in the diagram above, Machida can often get his opponents to forget about his legs entirely by simply creating some hand traffic in front of their face.

Then, because everything in Machida's game builds off of something else, uses the threat of this low kick to set up murderous head kicks (GIF). Most fighters know to mix kicks low and high, but Machida goes beyond simply hoping that the opponent will block low. His set-ups for the kicks downstairs cause such flustered reactions from the opposition that they don't react well to the kicks to the head, legs, or body.

Lyoto Machida and Chris Weidman are both incredibly adaptable. Each man learns from his opponent, and comes into the next round with a new way of finding and exploiting openings. Pressure fighter or counter fighter, both styles require one to get inside the opponent's head. It's more than just a battle of moving forwards or backwards; it's a battle of mind control.

For more analysis like this as well as fighter and trainer interviews, check out Heavy Hands, the only podcast dedicated to the finer points of face-punching.