BE's striking specialist breaks down the most intriguing sequences from Robbie Lawler's thrilling victory over Matt Brown from the main event of UFC on Fox 12.

(Author's note: This is part two of a 2-part piece. If you missed it, you can find part one here. Enjoy!)

Most fighters relish the idea of surprising their opponents. Like competing schools in a 70's Kung Fu flick, these men will hoard the fruits of their most recent training camp, cherish them like all-powerful secret weapons until they are given the opportunity to unleash them on their foe. These fighters are often undone when their hidden tactic fails to work.

Then there are those fighters who hide nothing. Every fight reveals every aspect of their style, and yet they succeed. These are the fighters that terrify, because they are completely known quantities that nonetheless prevail, crushing opponent after opponent with things beyond the realm of gameplanning. . It doesn't take much for a fighter to gameplan for a Nick Diaz, or a Jose Luis Castillo, or a Ricardo Mayorga. Rarely do they unveil new wrinkles. The difficulty is in the depth of the wrinkles they wear openly. Yes, you know what he's going to do. Now how are you going to stop him?

Matt Brown is such a fighter. True, something in Brown's approach changed prior to his recent hot streak, making the post-2011 incarnation of Matt Brown the best yet, but since his victory over Luis Ramos in June of 2012 Brown has shown more or less the same thing in every fight. Every opponent but Mike Pyle put him in considerable trouble, while two of them dropped him with body shots. And yet, until Robbie Lawler, nobody could stop him.

In part one of this article, I attested that Matt Brown does not think when he fights, he just does. Now I'd like to clarify that statement by saying that Matt Brown, at his best, does not like to think. Pausing to consider makes him uncomfortable; he'd rather be surging forward, pushing his opponent back with powerful strikes until they either fall down or get pulled into his devastating clinch. And any opponent who lets him rush forward unpunished, building momentum and confidence as he goes, is in serious trouble.

To beat Brown, one must force him to think--to hesitate.

Let's first look at the kind of environment in which Brown thrives. Though he proved confident and skilled enough to beat Brown, Lawler nonetheless had momentary lapses, which Brown exploited with characteristic ferocity. 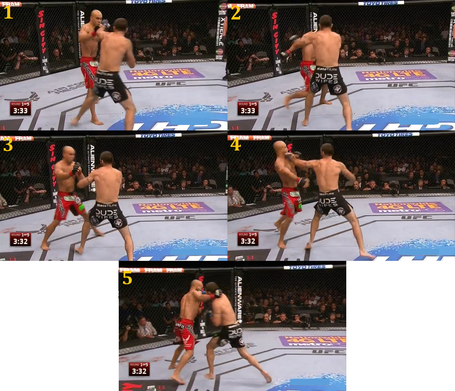 1. Brown uses a stepping jab to get his left foot to the outside of Lawler's right, lining up his right hand.

2. Lawler rolls with Brown's follow-up right and moves his right foot, preparing to take an angle to Brown's left.

3. Lawler places his right foot. He is momentarily square to Brown.

4. The Immortal clips Lawler with a long left hook before he can plant his rear foot . . .

5. . . . and follows up with a short right that staggers Lawler.

The key to this exchange is really Lawler's failure to respond to Brown's aggression appropriately, which is to say his failure to hit the man. The Immortal is a creature of momentum: he responds to a retreating opponent by ramping up his offense even further, and chasing after his target with reckless abandon (GIF). The only solution is to stand one's ground and counter. Anything other than near-immediate retaliation is a huge boost to the comfort and confidence of Matt Brown.

Lawler's mistake was to fall into a rhythm of defensive movement without offering any threat in return. Watching the GIF, you can see his swaying head movement become predictable and therefore capable of being timed. What's worse is the fact that, prior to this barrage of punches from Brown, Lawler had grown lazy with his counters, allowing Brown to miss without punishing him for his efforts.

Before we move on to Lawler's successful adjustment, however, let's take a look at how Brown managed to sneak these through. The following diagram lays out the two combatants' footwork (starting at frame 3 of the image above). 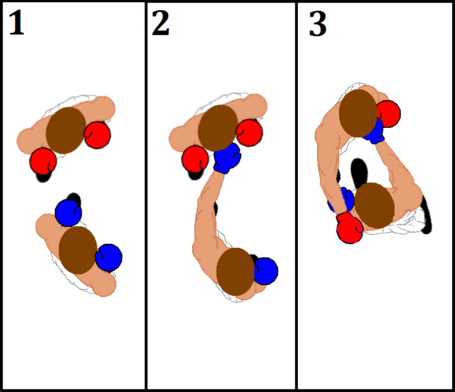 2. Before he can adjust, Brown snakes out a quick, long hook that clips him on the jaw. His feet are square, and he is stunned.

3. The follow-up right connects, and as he moves forward, Brown's head slips inside the arc of Lawler's counter right hook.

That right hand, while awkward in appearance, struck Lawler at an angle perpendicular to the line of his feet. A fighter's stance is designed to be balanced and braced, so that the rear foot can act as a shock absorber and help disperse force into the ground. When the rear foot does not directly oppose the force of a blow, however, it cannot absorb it. In addition, Lawler's rear foot wasn't even planted at the time of impact, making Brown's right hand a difficult one to absorb. The left hook before it also seemed to contribute, connecting on Lawler's chin when his feet were square to his opponent.

Despite momentum swings like this, Brown failed to ever really wrest the fight from Lawler's hands. Lawler can thank his thinker's mentality for that: whenever Brown punished him for letting his offensive output decrease, Lawler was able to quickly recognize the cause of his strife and change the tide. At his best Lawler threw like a counter striker, but in the aggressive fashion of a pressure fighter, marching Brown down and responding to every strike with a powerful, accurate blow of his own.

Here's a long string of such attacks. 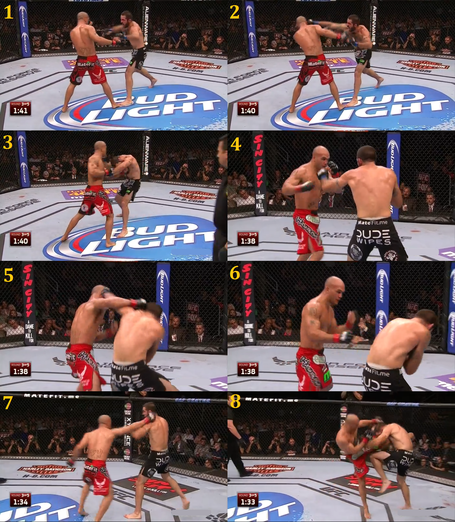 4. Brown falls back, and Lawler pursues, pulling away from a Brown jab . . .

6. Feeling the pressure, Brown falls back in a haphazard defensive shell. Lawler follows, maintaining his range and denying Brown the chance to reset.

7. Lawler leaps in with a slapping right hook.

8. A hard left kick to the body follows.

BE's striking specialist Connor Ruebusch breaks down just what allowed Robbie Lawler to beat the best-ever incarnation of Matt Brown in the main event of UFC on Fox 12.

The execution of techniques in this sequence is less important than the application. What you see here is Lawler, the thinker, sending a message: "Every time you hit me, I'll hit you harder. Every time you miss, I'll make you pay." The thing about doers like Brown is that they don't like to receive messages. A message means consideration, and considering means hesitation. Hesitation is anathema for a fighter whose every success is built off of fierce, kinetic assaults. Put on the back foot, Brown's effectiveness simply melted, and Lawler was able to move forward more and more, eschewing counter fighting and simply marching Brown down.

Of course, Brown had his moments, particularly in the very close fifth round. His never-say-die mentality makes him a perpetually dangerous opponent in that he is never truly out of the fight unless he is stopped. Lawler, however, managed to turn Brown into a lesser version of himself by teaching him, constantly, that he was simply not allowed to win.

Finally, Lawler's application of fighting fundamentals deserves notice. We often speak of fundamentals in terms of specific techniques--"this is how you throw a jab, this is the proper way to slip, etc"--but the true fundamentals of fighting are things accomplished through those techniques. Simple, athletic virtues: balance, leverage, coordination. Lawler's brilliance is in his refusal to abandon these concepts in the heat of battle--as Matt Brown does on a regular basis. 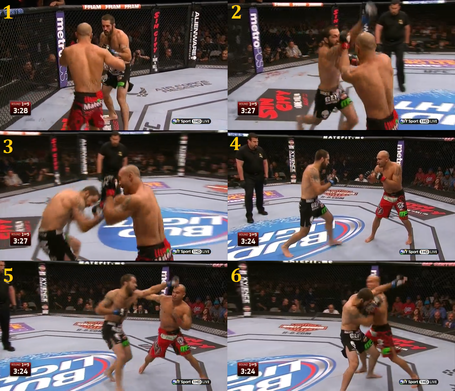 1. With Lawler on the retreat after being stunned, Brown pursues.

3. Brown's unmet momentum sends him out of position.

4. Lawler tries to reset once again.

5. Brown leaps in with a left cross this time, once again throwing his bodyweight recklessly forward.

6. Lawler counters Brown with a glancing left uppercut that nevertheless nearly knocks him over.

Brown requires a waiting target to remain balanced on the attack. Without landing, either on a guard or the face of his opponent, he often throws himself completely off-balance. Above, his first punch sends him into an awkward southpaw crouch, one from which he is in no position to throw. His failure to land results in a weak, compromised position. Immediately after, his failed strike causes him to lunge headlong into a Lawler counter, one which he only manages to survive because of a fortuitously positioned right hand, mashed into his face by Lawler's blow.

In some ways this is likely the cause of Brown's knockout ability--something I've called "weird power" in the past. His willingness to overextend and off-balance himself allows him to carry power well past his expected reach, catching unsuspecting opponents at the very end of his range (Pyle and Swick, for example). By launching himself bodily into every attack--ignoring the fundamental of balance--Brown puts himself at risk with every attack, as you can see in frame 6.

Lawler, on the other hand, is a man of incredible efficiency. Every defensive movement contains a readymade counter attack, and every attack contains either an escape route, or another attack to follow. The following sequence, shows off the simple beauty of this aspect of Lawler's game. 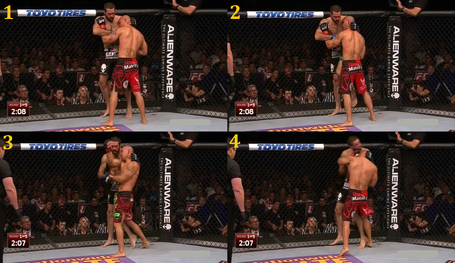 1. Brown controls Lawler's left arm with a short overhook, and grasps his neck with a left collar tie.

2. Concerned with knees while his back is to the fence, Brown lays his shin across Lawler's thigh to forfend any leg attacks.

3. Lawler takes advantage of Brown's focus on his lower body by twisting his body into a right uppercut, missing but creating just enough space for . . .

The fruit of Lawler's economy of motion is a near effortless transition from strike to strike. Note his heels in the sequence above. When, in frame 3, he throws with his right hand, he moves his weight from right to left, lifting his right heel and planting his left to the floor. In the next frame, he reverses the position, lifting his left heel and dropping his right to the canvas just as his overhand finds Brown's jaw.

There is also the cunning manipulation of distance. Lawler's right uppercut in frame 3 fails to connect, but in turning his body he creates enough space between his left shoulder and Brown's face to generate a powerful short punch, while simultaneously ripping his left arm from Brown's controlling grip. Whether it lands or not, the first punch is an essential part of the second one. And, of course, if it does land . . . it hurts.

Though subtle, each of these movements determines another movement to follow, whether defensive, offensive, or both. In short, Lawler finds such incredible success in hot exchanges because he almost never puts himself out of position to react. Know this: If you ever find yourself in the cage with Robbie Lawler, he is perpetually prepared to hit you, and he knows just the right way to do it.

For more analysis as well as interviews with fighters and trainers (including a fun talk with Matt Brown himself), check out Heavy Hands, the only podcast dedicated to the finer points of face-punching. Coming this week: a play-by-play scoring session of the controversial bout between Canelo Alvarez and Erislandy Lara.