Gaps in the Armor: How to beat Chris Weidman

Lyoto Machida has a mighty task ahead of him as he prepares to face UFC middleweight champion Chris Weidman at UFC 175. BE's striking specialist Connor Ruebusch breaks down what Machida will need to do to beat the champ.

Share All sharing options for: Gaps in the Armor: How to beat Chris Weidman

After seeing his teammate Anderson Silva fall twice at the hands (and shins) of Chris Weidman, Lyoto Machida likely realizes what a monumental task confronts him at UFC 175. Weidman was nowhere near being the favorite to beat Silva the first time around, but If you're a fan of the Brazilian Karateka, take heart. There is a way, and beating the greatest middleweight of all time does not make a man invincible.

In fact, there are quite a few flaws in Weidman's game that Machida is eminently capable of exploiting. Machida has the knife, but can he find the gaps in the champion's armor?

Weidman has shown himself to be very defensively sound for such an inexperienced fighter. He carries his head forward somewhat, but is very aware of the distance between his chin and his opponent's fists. The moment he senses a punch coming his way, Weidman will either pull his head back, or slip. When it's a combination, he will first pull or slip, and then move his feet (GIF), or else cover up and try to absorb the blows.

Lyoto Machida, or any other future opponent of Weidman's, would be very wise to follow the advice that Ray Longo gave Weidman himself against the elusive Anderson Silva: "punch a hole in his f*cking chest."

When Weidman moves his head, he leaves his body and legs behind. This is basically unavoidable. The head, being small, is very easy to move. A slight adjustment at the hips results in a relatively large movement of the head, making this method of defense very efficient and effective. The body, on the other hand, is large, and requires much more impetus to move out of the way. So, when Weidman starts leaning back, Machida needs to remember that his body and legs are still there for the taking (a hard lesson Machida learned himself when he first met Mauricio "Shogun" Rua at UFC 104). 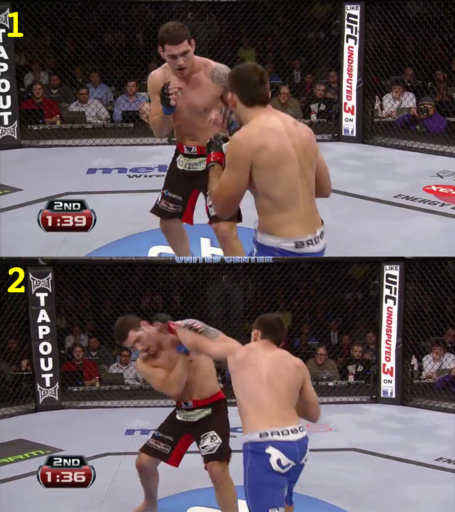 2. Maia leads with a left cross, and Weidman slips it to the outside.

Against a surprisingly sharp Demian Maia and Anderson Silva himself, Weidman has demonstrated the ability to deftly dodge southpaw straights to the head. Machida's bread and butter is his left straight, so this does not bode particularly well. As a body punch, however, the lead left has proven much more effective against Weidman. 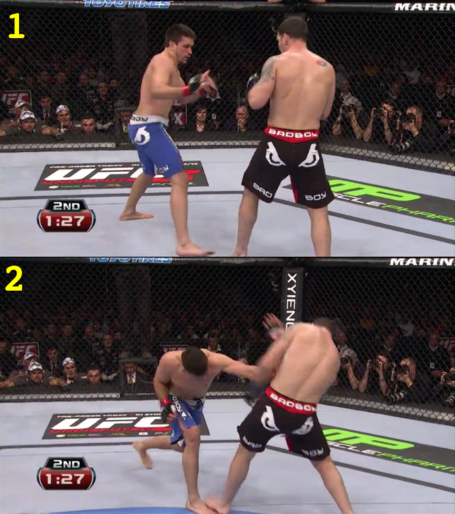 1. Once again, Weidman and Maia face off.

2. Another lead left from Maia. Weidman moves his head as before, but the cross lands to the body with enough force to knock him back on his heels.

On July 6, Chris Weidman shocked the world by handing Anderson Silva his first ever KO loss. Connor and Fraser take a look at the finish and compare the finishing sequence to some of Anderson's other performances. Plus, boxing GIFs!

Weidman's stock answer to strikes simply does not work when his opponent attacks his body. Despite his great accomplishments so far, we must still remember that Weidman is only eleven fights into his mixed martial arts career. Sound as his defense may be, it takes serious composure and practice to pick off body shots without opening oneself to head strikes. Weidman just doesn't seem to be developed enough yet to stop even the majority of body strikes thrown at him.

This weakness is even worse when Weidman's opponents attack him with combinations. Silva struggled to hit Weidman cleanly because he threw almost entirely potshots--punches and kicks without set-up or follow-up. Machida isn't known as a combination puncher, but he has shown an ability to throw multiple punches before, and his combinations were particularly potent in his most recent fight with another potent pressure fighter in Gegard Mousasi. 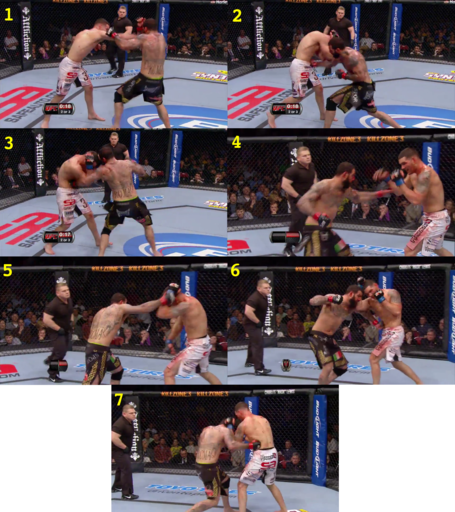 1. Weidman times a lead right nicely and catches Alessio Sakara on the way in.

2. Weidman senses Sakara beginning to counter and, somewhat out of position after his right hand, covers up. Sakara uppercuts under his guard to the body.

3. As Weidman backs up, Sakara follows him with a left hook to the liver.

4. Seemingly affected by the body punches, Weidman goes on the defensive. Sakara follows him with a jab that brings Weidman's guard up.

5. A right hand upstairs is blocked, but convinces Weidman that his head is the target for Sakara's next punch.

6. Which it is not. Weidman covers for a hook to the head and eats another liver shot.

7. Weidman turns to take his right side away from Sakara's hook, and the Italian drives a right hook into his spleen.

Again, this comes down to inexperience. Weidman is incredibly polished considering the time he's been in the sport because he is both extremely coachable and extremely well-coached, but there are some things that can only come with time. Weidman's response to pressure, particularly when confronted with a rapid series of strikes, is to duck his head and cover up, exposing his body and leaving himself open to upward strikes. The uppercuts and knees that Machida showed against Mousasi will serve him well here, particularly if they come after one or two fast throwaway punches to the front of Weidman's head.

There are also the legs. Whether or not his skill in Saturday's fight will be as sharp as it was for the rematch against Silva, Weidman has proven himself very capable of checking kicks. Of course, the problem with Anderson's kicks was the fact that they were naked: the former middleweight champion confidently threw kicks with no set-up, either unaware that Weidman would be able to check them, or certain that he was fast enough to sneak them through anyway. 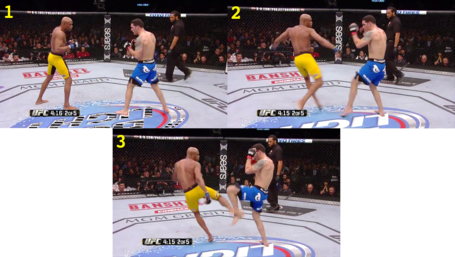 2. As Anderson steps to load up his kick, Weidman is already lifting his left leg.

Of course, the very next leg kick that Anderson threw ended disastrously for the former champ, and that kick was also completely devoid of set-up (GIF--this one's grisly). Again, this doesn't mean that Weidman's legs are off-limits--merely that it is imperative for Machida to disguise his kicks well, and test Weidman's reactions with some half-committed strikes, rather than going full-bore on a series of naked low kicks.

TAKE AWAY THE JAB

Weidman's left hand has increasingly become a staple of his transition game. As he cuts off the cage, he keeps a strong left jab constantly in his opponent's face. If it connects, this punch is enough to knock the opponent's head back and make him wary. If it doesn't, it's still enough to set up any number of follow-ups. 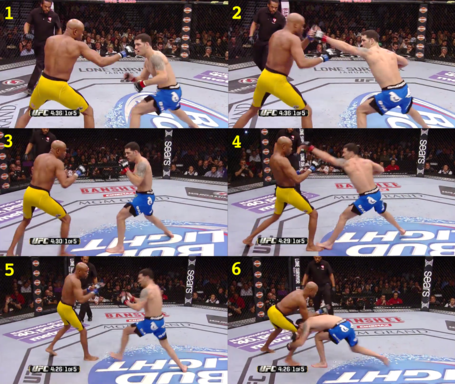 2. A long left hook, the same one that knocked out Anderson in fight number one, follows and misses.

4. Now his level change comes with a long, stiff jab. Anderson pulls back and evades this as well.

6. Anderson, waiting for the jab and the attack that follows it, is caught off guard when Weidman dives on a single and takes him to the canvas.

Weidman's jab is so effective because of its upward trajectory. As his knees bend and his body travels downward, his left hand shoots up into his opponent's face. As you can see in frame four, the most common response to this kind of attack is to pull the head back and stand slightly more upright, which puts the opponent in the perfect position to be barreled off his feet with a takedown.

Silva's mistake was waiting for the attack which followed Weidman's jab. He expected the jab to be the first attack of a combination, when the jab itself disguised a number of other leads. In frame five, Weidman's penetration step and level change look no different than the start of a jab. Anderson patiently waits for the punch to extend so that he can defend the follow-up and counter. But there's no follow-up, and there's no jab either. Instead, Weidman hits a single leg before Anderson can react appropriately.

An opponent would be wise to meet this jab (or feint, or takedown attempt) with a cover-all, simultaneous counter. Weidman's initial step forward is the threat, and the only way to convince him to stop moving forward in this manner is to punish him for doing so. Upward attacks are the answer for level changes--to keep an opponent from getting low, one needs to introduce him to something uncomfortable on the way down. Lyoto Machida's left knee to the body would be the perfect answer to Weidman's jab, letting the Long Island native drop gut-first into the powerful blow (GIF).

By now you may have noticed that all of these suggestions are offensive. This is because Weidman, in his two fights against Silva (and to a lesser degree in his earlier bouts) has revealed himself to be quite the adept pressure fighter. On the feet, Weidman does an excellent job of cutting off the cage and coming forward in a controlled, balanced manner. He rarely dives in off balance, or allows his opponent to take advantage of any angles on him, and he is always prepared to react to a counter.

In short, Weidman fully grasps the concept of initiative. Pressuring opponents has less to do with power or speed and more to do with keeping the opponent on the defensive. If Weidman's opponent is reacting to him and not the other way around, he is in complete control of the fight. To this end, Weidman feints a lot. He will flick and probe with his lead hand, take quick steps forward, change levels, and show the opponent a kick just to get them to move back. All of these subtle movements add to the general impression that Weidman is dangerous. Standing in front of Weidman presents the constant impression that he is ready and willing to hit you or take you down at any moment.

Thus, if he hopes to win his second UFC title, Lyoto Machida must out-feint and outwork the champion. Machida is one of the best feinters in the sport, if not the very best, so this is perfectly doable for him. In addition, Weidman really is a slow fighter. His timing is excellent, and he generally knows what to expect. In addition, he is usually the one moving forward--George Foreman was never fast either, but his opponents were always the ones who had to react to him. Put on the back foot, however, he is just not quick enough to keep up with the varied attack of a skilled striker like Machida.

The question of whether or not Machida can overcome the pressure of Weidman remains. Weidman's confidence has always been his greatest asset, and there is no doubt that he will be more sure of his own dominance than ever before come Saturday. By running him into counters and chasing him with kicks and long strikes to the body, however, Lyoto Machida stands a very good chance of winning the title, and beginning the Machida Era anew.

For more analysis like this as well as fighter and trainer interviews, check out Heavy Hands, the only podcast dedicated to the finer points of face-punching.

Gaps in the Armor