BE's striking specialist Connor Ruebusch breaks down just what allowed Robbie Lawler to beat the best-ever incarnation of Matt Brown in the main event of UFC on Fox 12.

If you are a follower of my breakdowns, you may have noticed that my analysis was conspicuously absent last week. That's because I was on vacation, not only from my daytime job and my daily life, but from my passion of combat sports. Fighting will always interest me, but covering the UFC's relentless schedule can be draining.

After a week without face-punching, however, it was incredibly refreshing to arrive home Saturday night and enjoy an unexpectedly competitive battle between Matt Brown and Robbie Lawler. For all that we in the MMA media complain about the drudgery of the current landscape, it's wonderful to be reminded of just why we fell in love with MMA in the first place. Lawler vs Brown was that reminder, and I'm excited to jump back into the fray.

Let's dive in, shall we?

Before we start looking at sequences from the fight, we ought to establish something about the personalities of the men involved.

Matt Brown is not a thinking fighter. This is not to say that he's stupid, but rather that his actions in the Octagon are almost purely the result of his training beforehand. If he is taught to do it, he will do it. If challenged, he will resort to what he knows best. Matt Brown does not think, he does, and this makes him exceptionally dangerous. Like a force of nature, Brown's style is predicated on having his way, no matter what. He leaves the adjustments up to his trainers, and simply fights.

Beating the Immortal takes a special kind of fighter, one who is not only clever but just as fierce as Brown himself. Enter Robbie Lawler, who put on a spectacular performance against the very best Matt Brown there has ever been.

Lawler, unlike Brown, is most assuredly a thinker. Brown only knows how to war with his opponents. Standing in the pocket, throwing everything he has at his adversary--this is just how he operates; it's part of who he is as a fighter. Lawler, on the other hand, brawls tactically, sometimes just to remind his enemy that he is capable of holding his own. He can trade blows with the toughest and the meanest, but his is a calculated style.

For Lawler to defeat Brown, he had to get him to think. Tougher than it sounds. I've already compared Matt to a force of nature; so how does one put fear into the heart of an earthquake? How does one convince a hurricane to reconsider its course? How does one remind an immortal that he is, in fact, not?

To get the doer thinking, it is necessary to get his attention. There must be severe and immediate consequences to his actions. One must not only punish the doer for his mistakes, but punish him for his successes as well, so that every one of his well-trained, automatic attacks is rendered a grave error. This is where Lawler's fight IQ really shone. 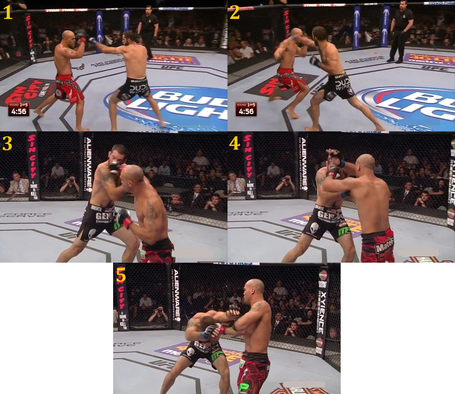 1. Brown jabs his way into range.

2. He takes a step to the outside of Lawler's lead foot and throws a right hand, but Lawler pulls back and to the left, avoiding the punch.

3. In the same motion, Lawler connects with a right hook.

4. Stepping forward, he follows with a short left hand . . .

5. . . . and finally a glancing right uppercut that meets Brown's head as he ducks down.

Strategically, this is brilliant. Brown has proven to be a fast starter in the past, and is easily at his best coming forward behind salvos of strikes. By meeting Brown's very first attack with a powerful counter combination, Lawler immediately took Brown out of his element.

Before exploring that idea further, however, let's look at just how Lawler made that counter work. By coming forward behind a pumping jab, Brown hoped to distract Lawler and sneak his lead foot outside Robbie's, like so. 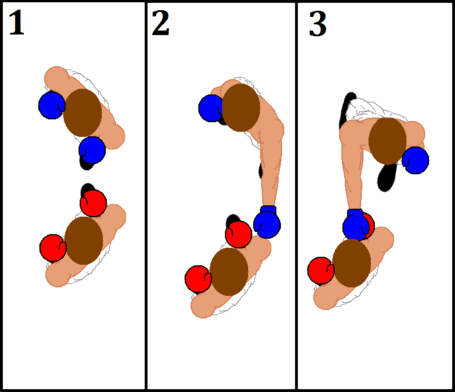 2. Brown jabs and places his left foot to the outside of Lawler's right.

3. Brown connects with a straight right.

This is easily the most common maneuver in orthodox vs southpaw matchups, and one of the most reliable. That step shortens the distance between the orthodox fighter's right hand and his southpaw opponent's face, creating a quick n' dirty angle for his most powerful punch. Unfortunately for Matt, this oh-so-common strategy is fairly predictable, and Lawler's own simple footwork found the solution. 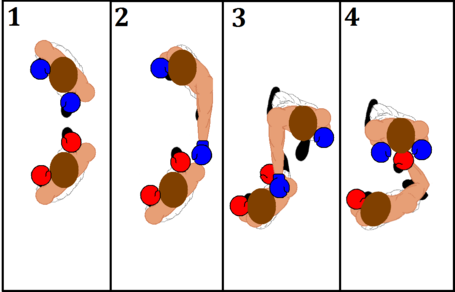 2. Brown jabs and places his left foot to the outside of Lawler's right.

3. Brown attempts a straight right, but Lawler slides back to his left, pulling his head back and evading the blow.

Many pundits would tell you that by pulling and circling to his left, Lawler puts himself into the path of Brown's right hand. In reality, however, it is very easy for a southpaw to move back and to his left, while it is very difficult for an orthodox fighter to move forward and to his right. Thus the inside angle, wherein the southpaw faces the orthodox fighter from the orthodox fighter's right side, is often a crafty southpaw's most reliable trick. You can see this footwork in action in just about any Lyoto Machida fight, for example.

If you watch the GIF above, you can see how deceptive Lawler's footwork is. Though he appears to be moving toward Brown's right hand, the distance is far greater than Matt realizes, and the follow-through on his punch causes him to overextend, falling right into the trap of Lawler's counter right hook--and the punches that follow it.

A Wrench in the Works

With counters like this, Lawler was able to slow Brown's momentum. Again, the key was to force Brown to think. Matt is comfortable coming forward and throwing constant, powerful strikes. The sheer volume and variety of his attacks means that he can find openings through pressure alone. Whatever his coaches prepared him to do, he will do it if his opponent allows him to, and it will eventually work.

By countering with hard, meaningful punches, however, Lawler convinced Brown that he wouldn't fold in the manner of Mike Pyle or Jordan Mein. Instead of going purely on the defensive, Robbie fought back, ultimately putting Brown on the defensive. And once on the defensive, the holes in Brown's game become very clear. 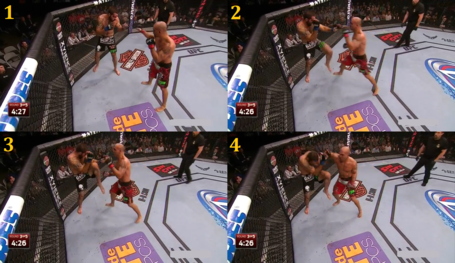 2. Lawler steps to the left and extends his body as if to throw a left kick--Brown reacts by raising his left shin.

3. Lawler bails on the kick, and finds himself at an angle to Brown, who is momentarily trapped in place by his own defensive maneuver.

4. Lawler pummels Brown with a right hook on the temple.

Robbie Lawler is an excellent feinter. Not only does he feint in the usual way, by flinching and half-throwing strikes, but he commits to attacks only to give up on them for better ones. Often Lawler will step bodily into a strike, only to reposition himself and strike through the opening created by that movement.

In the example above, Lawler gives every appearance of actually throwing a left kick. The fact that he is able to bail on the kick and immediately follow up with a powerful punch speaks to his excellent balance. He rarely throws himself into an attack so recklessly that he cannot instantly recover and adjust. In addition, it serves to underline the point made in the first section of this article: Robbie Lawler is a thinker, through and through. Even mid-strike, Lawler is considering, weighing his chances. If the opening for the kick closes before the kick lands, there is a high probability that Lawler will land with something else regardless.

That does it for today, but there's lots more to look at in this fantastic fight. Check back tomorrow, when I'll be taking a look at Brown's surprising successes, and the ways in which Lawler kept him from running off with the fight.

For more analysis as well as interviews with fighters and trainers (including a fun talk with Matt Brown himself), check out Heavy Hands, the only podcast dedicated to the finer points of face-punching. Coming this week: a play-by-play scoring session of Canelo vs Lara.