In the second instalment of Forgotten Warriors, we look at the one they call El Dirte. Joe Doerksen is a true warrior. The dude has a pro record of 50-16. Even though he doesn't fight as much any more, he still remains active at a regional level. The Manitoba native picked up his 50th win just last fall in Winnipeg, MB. 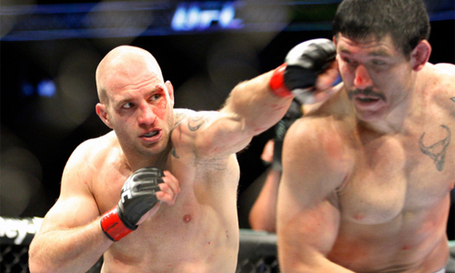 Doerksen started his pro MMA career back in 1999, at the first Bas Rutten Invitational. In impressive style he tore through his first three opponents, before losing his forth match to UFC vet Eugene Jackson. Between 2000-2001, El Dirte went on a crazy 12 fight win streak. He also put together a 10 fight win streak between 2003-2004. All this before ever stepping foot in the Octagon.

Joe made his UFC debut against Joe Riggs at UFC 49, in August of 2004. Unfortunately for Doerksen, Riggs was able to put him away in the second round. Doerksen and the Octagon never really got along. He had a total of nine fights under the UFC banner. Out of those nine, Joe only managed to earn two victories. The most notable being the submission of Patrick Cote, at UFC 52. Why include him in Forgotten Warriors? Because, outside the octagon he is what I like to refer to as a manimal. Plus check out the list of fighters this man went to war with. Nate Marquardt, Hector Lombard, Ed Herman, Matt Hughes, Chris Leben, just to name a few. Then there's his career finishes, currently sitting at 43 stoppages. An amazing 35 submission victories, and 8 KO/TKO wins.

King Of The Cage is expected to make it's Manitoba début this September. From what Top MMA News is reporting, Doerksen is in the main event. Currently scheduled to face Tony Lopez, I'll be in line in hopes of a cage side view of the living local legend in action.