Is there a crossover between Mixed Martial Arts and basketball? Well I asked several MMA personalities their thoughts on the NBA Finals and here's what they had to say.

If you're a sports fan you would likely know that Game 1 of the NBA Finals between the Miami Heat and the San Antonio Spurs went to the guys from Texas, with a little help from a bad case of the cramps. Well you'd probably know or care about that whole incident with LeBron James if you followed other sports aside from Mixed Martial Arts.

Mike Miller has partnered and set up gyms with Ryan Bader and Aaron Simpson, and there's quite a few NBA players like Roy Hibbert and Glen Davis who cross-train in MMA during the off season, but is there really a cross-over between Mixed Martial Arts and Basketball? Well I asked several fighters if they watched basketball and to provide NBA Finals picks, and here's what they had to say:

Josh Samman, UFC fighter: "It's hard to live in South Florida and not get swept up in the Heat hype. I'll admit that it took me having to live in a town with a dynamic championship winning team before I appreciated it, but I've been watching these last few years. It's not MMA, but it's still some of the most athletic guys in the world doing awesome shit. Heat in 6 is my guess."

Vaughn Anderson, Bellator fighter: "I don't watch basketball. Let's pick Heat because the name has 4 letters and is warm, like Blud."

Jason Chambers, pro fighter and ONE FC commentator: "I live in Miami. Figure it out. ;)"

Rob Lisita, ONE FC contender: "Yeah bro, the Heat because Miami is the place to be. I love Miami."

Mark Striegl, PXC contender: "I'm gonna go with my heart and say the Spurs in 6. My head though might be telling me otherwise."

Irshaad Sayed, EFC star & RUFF champ: "Basketball? What's basketball, is that the Michael Jordan sport? I'm too short to watch that. haha. It's not big in South Africa, never been into it."

Ben Saunders, UFC & Bellator vet: "I'm a Florida boy, born and raised so you know I'm rooting for The Heat"

Mark Eddiva, UFC fighter: "I used to but do not follow too much any longer. Heat siguro ^_^ "

EJ Calvo, PXC Promoter: "Oh boy! Miami gonna win in 6. Gonna steal Game 1 or 2...and all home games. I am into basketball big time! I played in high school & college in the US. California State Champ '95, Guam National Team point guard from 2002-2008, and Men's National Team Head Coach from 2011-present."

Cody Bollinger:  I don't watch it but I'm going for whatever team doesn't get a leg cramp

Sean McCorkle: I say the heat will win in 7 games because LeBron sold his soul to the devil 20 years ago

Renato Laranja: I want The Heatch ...because it remind me of the movie me and Kenny Florian was in.

Francisco Rivera: San Antonio will win. They have the most veteran players n most experience

Other UFC personalities chimed in on twitter as well: 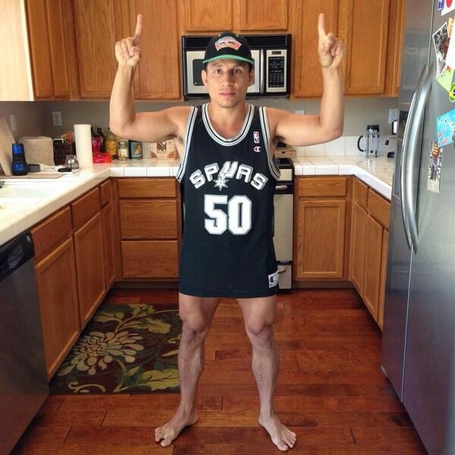 As for the Bloody Elbow staff, there are only a few of us who are that into basketball apparently. Despite the game 1 loss, I'm still picking Miami to win in 6. I think LeBron and the Heat will check their shooters better on defense, win the next one on the road, and won't lose at home.

Steph has hometown bias, and my awesome, albeit slightly less attractive, colleague in Mookie obviously disagrees with me. It's good though that my wookie-loving buddy in Dallas has much better taste:

Steph Daniels: "Spurs for me please, especially since I live in San Antonio"

This is obviously a very small sample size, but do you think there's a cross-over between the two sports? How do you think this third Finals series between Tim Duncan and LeBron James will go?