Part two of this week's Technique Recap finishes up the Weekend of a Thousand Fights with some of the best moments of technique and strategy from the Ultimate Fighter Brazil 3 Finale in Sao Paolo. BE's Connor Ruebusch breaks it down.

Welcome to part two of this week's Technique Recap. Today we're looking at two of the fights from the UFC's TUF Finale event in Sao Paolo Brazil, one of them thrilling, one of them laughably predictable.

Miss part one of this breakdown? Find it here.

In Kevin Souza vs Mark Eddiva fans were treated to a fantastic brawl, but also a classic puncher vs kicker matchup. It was Souza, with a reach advantage and power in his hands, that wanted to trade fists, while Eddiva was at his best when he could interrupt Souza's combinations with hard kicks to the legs and body.

The fascinating aspect of a puncher/kicker fight is the battle of distance. Kicks and punches each have their own distinct range of effectiveness, so this kind of matchup quickly becomes a story of two distances. The puncher will try to close the gap and plant his feet in mid- or close-range, while the kicker will attempt to use his longer limbs to stop him from ever getting there. In order to be effective, each fighter must time his attacks to catch the opponent in poor positions that compromise their ability to manage distance.

For Eddiva, the openings presented themselves in plenty whenever Souza tried to come forward. 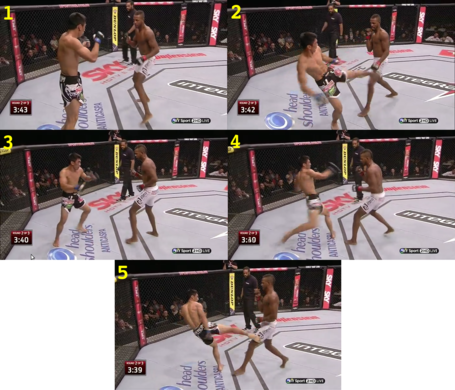 1. Souza moves forward, taking a step in Eddiva's direction with his left leg.

2. Eddiva smashes a kick to the inside of Souza's leg as he pivots; while his right foot is moving, his weight is stuck on his left leg, making it a ripe target.

4. Once again Eddiva waits till Souza steps forward, planting his weight on his left foot.

5. An outside low kick hammers Souza's thigh even as he tries to pull back.

For the most part, Eddiva did well when he attacked first, thanks to the greater range from which he could initiate strikes. Waiting for Souza to rock forward, he attacked not only the lead leg but the body as well, knowing that Souza, with his weight momentarily forward, would not be able to switch directions so quickly enough.

Eddiva's game was missing two things: 1) more linear kicks: he did demonstrate some nice side kicks, but didn't use them enough to frustrate Souza and create openings; 2) head kicks: again, Eddiva did throw one or two, but a greater frequency of kicks to the head would have quelled Souza's notion that he could afford to walk through Eddiva's kicks. In reality, that's precisely what Souza ended up doing. 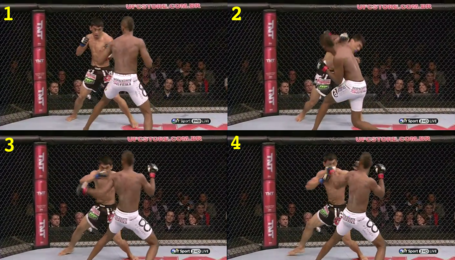 2. Souza and Eddiva trade overhands, both missing as the other moves his head.

3. Both fighters follow up with hooks, but Souza shifts from his left foot to his right, pulling his head out of range, while Eddiva's head stays forward.

First of all, Kevin Souza was not a very technical puncher. Much of the reason that he struggled to get past Eddiva's kicks throughout the fight was due to his jab, which was nowhere to be found. His hook, however, was easily his most effective punch because, while his right was often wild and uncontrolled, he threw his left in such a way that it automatically protected him from Eddiva's counters.

In yesterday's edition of the Technique Recap, we saw Drew Dober committing the same mistake as Eddiva here. To fight effectively in the pocket, one needs to pull back on punches as well as push forward. Reaching forward on the left hook not only reduces power, but leaves one badly compromised defensively. Pulling onto the back foot with the hook, however, well... you can never have too many great boxing GIFs to illustrate a point.

In the end, Souza beat Eddiva in the mental battle, winning the fight despite losing a good part of both rounds to the more diversely skilled Eddiva. While Eddiva could capitalize on Souza's inability to close distance intelligently, he could not keep himself from exchanging punches when he did manage to get in close, and with his more effective weight transferring, Souza had the harder punches and tighter defense at that range. The final thirty seconds of the fight all took place in Souza's preferred range, not because he made any significant adjustments, but because Eddiva couldn't resist the brawl.

Too much UFC? Nonsense! BE's striking specialist Connor Ruebusch breaks down the best moments of technique and strategy from UFC 173 and UFC Fight Night Berlin in the first installment of this massive Technique Recap.

Now, the title of this section may seem very inflammatory, but it is in no way meant to slight Fabio Maldonado, who showed great heart in stepping up to fight a natural heavyweight on short notice, particularly considering the fact that Maldonado himself is probably best suited for middleweight. Rather, this technical analysis will serve as an indictment of the UFC's downright dishonest advertizing, billing Maldonado as an undefeated professional boxer without lending any context to that claim.

True, Maldonado has fought as a boxer, and he is 22-0 in professional bouts. However, 18 of Maldonado's opponents had either one or zero wins at the time he fought them. The only two veteran fighters that Maldonado fought were barely holding .500 records, and the second one--Maldonado's last fight in the sport of boxing--was on an eight-fight losing streak. Don't get me wrong: there is nothing wrong with fighting easy competition for the sake of experience, and there's nothing wrong with the myriad folks who box for a little extra money rather than because they possess exceptional talent. This should indicate, however, that Maldonado is not as skilled a boxer as the UFC's promo videos would have us believe. 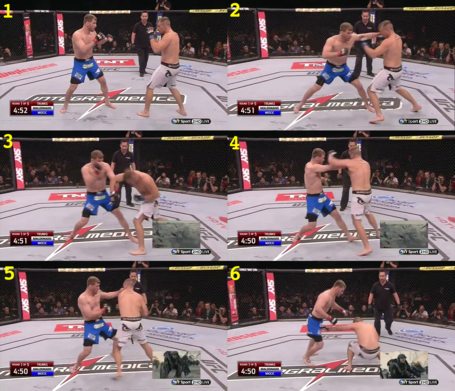 1. Miocic and Maldonado stand in a neutral position, out of range.

2. Miocic works around Maldonado's lead foot with a series of jabs.

3. Maldonado flinches, trying for a counter right but taking his eyes completely off Miocic in the process.

5. Maldonado, now completely square and with his eyes once again off his opponent, eats a sharp left hook and nearly falls down.

6. This is the one area where Maldonado seems to have retained some boxing savvy: according to the Marquess of Queensbury Rules, that is officially not a knockdown.

This is some good work by Miocic, but his job is made far easier by the fact that Maldonado simply does not move his head on the way in. Unlike Kevin Souza above, there is no significant shifting of weight on his punches; he simply walks forward, hoping to land while flinching at every counter that Miocic throws. If there is one way to turn a good punch into a great one, it's to shut your eyes and look away as it nears your face--they say the punch you don't see is the one that knocks you out, and in the only two significant exchanges of this 35-second fight, Maldonado didn't see anything past the first punch.

Here's the sequence that ended the fight. 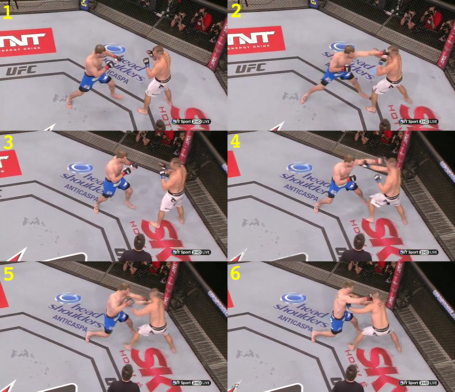 1. Miocic backs Maldonado up near the fence.

2. A stiff jab from Miocic.

3. Maldonado backs up even farther.

4. Miocic throws his next left wide, trying to corral Maldonado into his right hand. Maldonado takes his eyes off Miocic to try to catch the punch, then flinches when his parry misses.

5. Maldonado tries a counter jab, but doesn't adjust for range, and turns his head to the right.

Not only does Maldonado give up position without a second thought, but his reactions to every one of Miocic's punches belie his supposed high-level boxing background. Turning his head away the moment he realizes that Miocic might touch him with the jab, Maldonado gives his opponent the opening for a right hand, and causes it to do more damage than it would have otherwise.

Again, Maldonado is a tough man, and no doubt about it. He is the sort of fighter that every promotion wants to have: reliable, courageous, unprotective of his record. He is not, however, a skilled boxer, and the UFC really needs to stop billing him as such.

For more analysis like this as well as interviews with trainers and fighters of every sort, check out Heavy Hands, the only podcast dedicated to the finer points of face punching. This week's episode features BE's Pat Wyman, who has scouted opponent's for fighters such as Fabricio Werdum and Rafael Dos Anjos. Seriously, it's coming out this week. I SWEAR.