BE's striking specialist Connor Ruebusch, having already delved into the crap, now turns to the good moments from UFC 174, including Demetrious Johnson's exhibition of technical clinching against Ali Bagautinov.

A few bad apples can spoil the whole bushel. That was certainly the case with UFC 174 which, like a bad bunch of apples, left a sour taste in the mouths of fans. Perhaps this was the UFC's fault, for putting together the most underwhelming pay-per-view lineup since UFC 161, but we've all seen stacked cards turn out to be slow and disappointing, so maybe it was just one of those nights.

Regardless, the whole event feels a lot more satisfying in retrospect if you remove just two or three fights. Not only was there exciting action and technical prowess on display, but a few fighters seemed to have experienced legitimate turning points in their careers. All in all, MMA is a much more enjoyable sport if you make an effort to shed the old feeling of obligation: no, you don't have to watch every fight on every card, and for every unexpected gem you miss, there will have been ten more in a month's time.

So, with yesterday's bitter criticisms out of the way, let's now take a more optimistic look at UFC 174.

Aside from a tough loss for perennial journeyman Kajan Johnson, 174 was a very good event for Tristar, Canada's premier MMA team, and its head coach Firas Zahabi. Jackson's MMA used to be the camp known for its excellent strategies, but other teams are quickly overtaking the Albuquerque-based gym in the gameplanning realm, with Tristar at the forefront.

Rory MacDonald hasn't exactly been at his best lately. Perhaps that's a result of the strength of his competition, as few fighters look as great against top-ten fighters as they did when they fought an endless stream of no-names. Still, it seemed that something was missing from MacDonald--his fire, perhaps. Gone was the essential meanness that had defined his early career, replaced by cold, calculated strategy.

Evidently, Tyron Woodley was just the man to bring out a little of that old passion. MacDonald seemed to forget the tentative, stiff manner that was so grating in his bouts with Jake Ellenberger and Robbie Lawler, and instead returned to what was probably the perfect blend of strategy and killer-instinct, looking every bit like the Rory MacDonald that beat up and bullied BJ Penn back in December of 2012. Woodley, so used to being the more physically imposing fighter, found himself victimized by a man who still looks like an awkward teen.

After a series of adjustments in the first round, MacDonald seemed to have swung the momentum of the fight in his favor. Then, at the start of round two, Woodley came up with an answer: leg kicks. Woodley showed that he could kick with serious power against Carlos Condit (his heavy leg attack may well have contributed to the ACL tear that ended Condit's night early), and the impact of his shins against MacDonald's legs was evident. The last time I wrote about MacDonald, I mentioned that his front foot-heavy stance and inward-turned left foot left him especially vulnerable to leg kicks. That was still the case against Woodley, but MacDonald used his strategic mind to take away Woodley's kicks, even if he couldn't defend them. 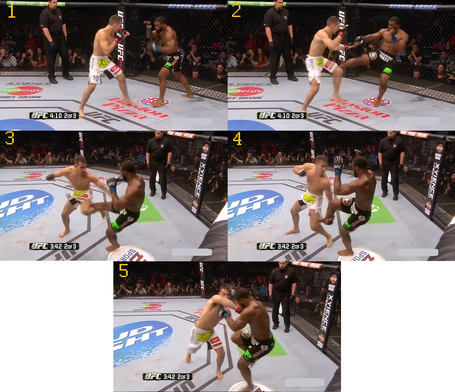 1. MacDonald plants his lead foot on a jab feint.

2. Woodley punishes him with a heavy kick.

3. Circling along the cage, Woodley plants another kick seconds later.

4. MacDonald turns with the kick, and catches hold of Woodley's heel, keeping him off-balance.

5. Planting his foot again, MacDonald cracks Woodley, still on one leg, with a hard right to the mouth.

These are the little question-and-answer moments that often go overlooked by fight analysts. As far as technique goes, it's clear that MacDonald still cannot defend leg kicks. That remains a weakness in his game. What he can do, however, is convince his opponents not to exploit that opening. Woodley threw three kicks in the first minute or so of the second round. On the third one, MacDonald took the kick and nailed Woodley with the punch you see above, and suddenly Woodley decided against throwing so many kicks. The third kick may have landed, but Woodley found himself defensively compromised, and MacDonald showed him that he was willing to eat a leg kick if it meant a free punch to the face.

MacDonald didn't simply expect his opponent to fall into his game the way he did against Robbie Lawler. Instead, he wrested control of the fight from his adversary's hands. When Woodley seemed to have found an answer to his style, he immediately produced a counter-answer of his own, and maintained his grip on the pace of the bout.

THE MAN OF A MILLION STYLES
Featuring: Demetrious Johnson

Instead of asking what else Demetrious Johnson will show us, we should make it easy on ourselves and start trying to figure out what he can't do. Mighty Mouse is one of the most adaptable fighters in all of MMA, and he showed that yet again against a very tough opponent in Ali Bagautinov. The first period of this bout seemed to be a testing phase for each man, wherein the challenger tried to figure out what his opponent was bringing to the table, and vice versa. Almost five minutes had passed without a clear and consistent opening for the champion until, in the final thirty seconds of the first round, he landed a series of clean, hard knees in the clinch.

As he returned to his corner, Johnson's coach, the inimitable Matt Hume, instructed him to go after those knees again. "He doesn't have an answer to the clinch," Hume told him confidently. That may have been a bit of an overstatement, but Johnson certainly showed that, if Bagautinov had answers, he had about a hundred more ready to go. 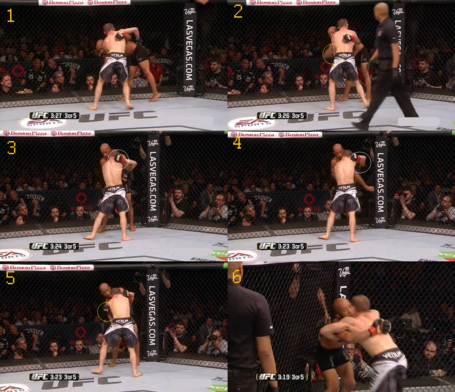 1. Caught against the cage in an over/under clinch, Johnson scoots to his left to gain leverage and create space within Bagautinov's underhook.

2. Once that space is created, Johnson sneaks his right hand (circled in yellow) into the gap.

4. Johnson lifts his left elbow (circled in white) to clear Bagautinov's arm from his ribs, and drives home a hard knee to the liver.

5. Now, as Bagautinov is distracted by the knee, Johnson drives his right arm (circled in yellow) fully under Bagautinov's left arm.

This is brilliant stuff by Mighty Mouse. He incorporates every element of mixed martial arts into his fighting, no matter where the fight takes place. Bagautinov might be able to outwrestle him, but can he still do so when he's being kneed in the guts? Apparently not. The best part of this sequence, however, is what takes place immediately after. Once Johnson has gained double-unders, arguably the most dominant position in the clinch, he takes advantage of his circumstances--but not in the way that Bagautinov suspects. 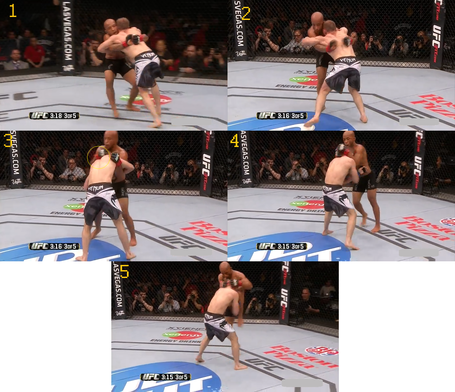 1. Bagautinov sucks his hips away from Johnson's to keep from being taken down.

2. Realizing that he can't out-muscle the Dagestani, Johnson takes advantage of the space between their hips and steps into a hard left knee to the gut (not clearly visible), simultaneously releasing his clasped hands.

3. Johnson immediately gives up his right underhook and switches to a collar tie grip on the back of Bagautinov's head (circled).

4. He's already in a good position, but Bagautinov is strong, so he opts to do the same with his left arm, ending up in a very strong double collar tie.

5. Johnson smashes his left knee into Bagautinov's eye socket, pulling his head down as he does so.

If we learned two things in Johnson vs Bagautinov, they were that 1) Ali Bagautinov is very strong, and 2) Demetrious Johnson has a serious proclivity for kneeing people in the face. In the heavily grappling-oriented SAMBO and wrestling that Bagautinov is used to, an opponent would be very unlikely to give up double underhooks as easily as Johnson does here, but this is one of Mouse's strongest traits as a fighter: he never falls so in love with one position or aspect of the fight that he won't immediately jump on another opportunity. In the clinch, Bagautinov was in full-on wrestling mode, while Johnson was able to adapt and take advantage of that mindset by switching intermittently between wrestling and Muay Thai.

Every one of Johnson's fights is a testament to the virtue of technique. No, he's not a perfect technician as Joe Rogan would have you believe, but he does win because of technique, just as he did as an undersized bantamweight for the first several years of his career. Bagautinov was clearly the stronger fighter, but Johnson used technique and strategy to take that advantage away from him--no fighter in the same weight class is strong enough to simply shrug off a tightly applied double collar tie, and Johnson's was perfect. Hands high on the crown of the head, elbows tightly pressed against the collarbone, high on the toes, back muscles engaged--all of the correct elements are there. This is the reason many of us fell in love with MMA in the first place. Just like Royce Gracie catching the gargantuan Dan Severn in a triangle, Johnson used leverage to shut down the raw power of Bagautinov.

Apologies for the delay on this article, folks. I know you've probably forgotten about this event already, but Demetrious Johnson is a truly special fighter who deserves recognition, so if you've got a few minutes, go back and review his performance. Chances are, you'll like it better when it's not spoiled by a tedious fight card.

For more analysis and fighter/trainer interviews, check out Heavy Hands, the only podcast dedicated to the finer points of face-punching.