Too much UFC? Nonsense! BE's striking specialist Connor Ruebusch breaks down the best moments of technique and strategy from UFC 173 and UFC Fight Night Berlin in the first installment of this massive Technique Recap.

Well, that was exhausting, right? There was a time when most of us couldn't get enough UFC fights in our diet, but with two UFC cards in one day it seems that time is now well and truly gone. More than anything, after a long weekend of MMA, I think we could all use a good nap.

Well too bad! The longstanding tradition of the Tech Recap won't allow it. What's more, I spent so much time last week breaking down the brilliance that was TJ Dillashaw's win over Renan Barao that I never covered the other exciting fights on that card, so there are two bouts from UFC 173 featured on this week's Recap as well.

Don't worry: if Saturday's TUF Brazil Finale taught me anything, it's the importance of pacing, so I'm breaking this one up into a two-parter. Today we're breaking down the techniques and strategies of Mizugaki vs Rivera, Lawler vs Ellenberger, and Hein vs Dober. Tomorrow, who knows--after this I'm going to seriously consider that nap before anything else.

You can find part two of this Tech Recap here.

At the upper levels of combat sports, fighting becomes a delicate, intricate practice. One little mistake can leave you on your back, staring up into the bright lights wondering who that man with the rubber gloves is. Case in point: Takeya Mizugaki's round one knockdown of Francisco Rivera.

Despite his reputation as a brawler, Rivera has some of the best defense at bantamweight, incorporating a great deal of head movementd (and the counter strikes to keep it effective) into every fight. Unfortunately for Rivera, his time among the lower ranks and relative inexperience have allowed him to get by with sloppy technique. Against a very experienced, patient, and accurate puncher like Mizugaki, the cracks in Rivera's approach started to appear very quickly. 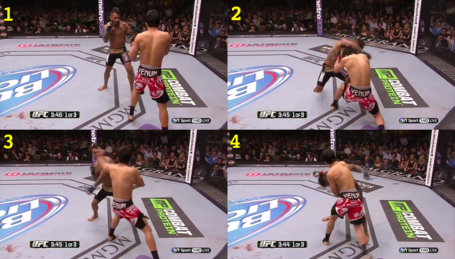 3. Popping his head back up, Mizugaki tries to catch Rivera's head forward with a left hook, but Rivera fades it.

4. Mizugaki follows his left with a cross--Rivera successfully avoids it, but slips the wrong way.

It may seem odd to say that Rivera often slips "the wrong way," but it's the truth. Against a jab there is really no one ideal direction to move: slipping left can leave you vulnerable to a left hook or right uppercut, but can set up your own hook, and slipping right puts you in position to throw a counter jab or cross.

With the right hand, however, there is most certainly a correct way to go. Above, Rivera moves his head back and to the right. Fortunately for him in this example, Mizugaki telegraphs his punch and Rivera is able to improvise his slip into more of a roll, bobbing under the punch as it comes. Unfortunately, Mizugaki immediately catches on to the pattern, and begins working to exploit it. 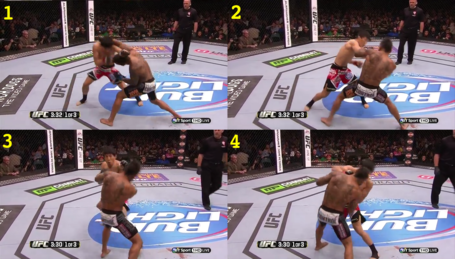 1. Rivera tries to counter a Misugaki jab with an exaggerated cross counter. Both men miss.

2. As Rivera's head moves back to his right, Mizugaki follows him with a right hand that lands on the jaw.

3. Again Mizugaki leads with the jab, but Rivera elects to slip this one to his right.

4. Mizugaki follows up with another right hand, shortening this one perfectly and dropping Rivera.

This is why you don't slip right to avoid a right hand. In two consecutive exchanges, Mizugaki cracks Rivera with his right hand as his head is over his right leg. This is because the natural arc of the cross, which begins to loop down and to the left at the end of extension, carries the fist directly to the spot that an opponent's head would be after a good slip to the right. The correct choice would be to either dip or roll under the cross or, preferably, to slip left, into and outside the path of the punch, in the perfect position for a counter left hook (GIF).

Mizugaki is an excellent combination puncher in that he picks his punches intelligently. Once he realized that he could time Rivera's head movement, he began pressuring with his jab, trying to force Rivera to linger over his right hip. The moment that Rivera did, Mizugaki connected with a very short, very powerful right hand to the base of Rivera's jaw, which sent him reeling to the canvas. It's a testament to the toughness of Francisco Rivera that he only lost this fight by unanimous decision.

Robbie Lawler is incredible. I'll just get that out of the way right now. After years and years of middleweight mediocrity, Lawler's return to welterweight--and the UFC--have revealed one of the most dangerous veterans in the sport. In fact, those years of inconsistency may not have been a complete waste, as Lawler's experience has fostered in him an ability to adapt mid-fight unrivaled by anyone else in the welterweight division. Nobody's bag of tricks is more complete than Lawler's.

Known as a puncher, one of Robbie's most potent weapons remains his left kick. Thrown to the head or body, this is one of those strikes that you don't even want to be forced to block, as Jake Ellenberger soon found out. 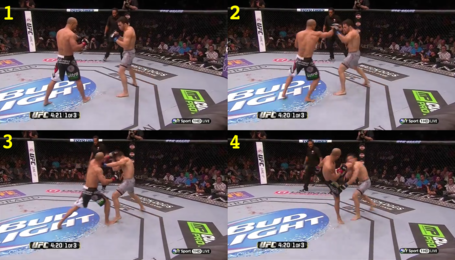 2. Now Lawler throws out his jab, already setting his feet for another kick.

3. Ellenberger, having parried the jab, now looks to slip/duck under Lawler's left arm, thinking it's a cross.

4. Instead, Lawler partially connects with a perfect head kick. Ellenberger's blocking right arm is all that keeps him conscious.

Lawler made it clear from the beginning of this bout that he expected the left round kick to be an effective technique against the orthodox Jake Ellenberger. After attacking with it twice, Ellenberger began to suspect that Lawler was setting him up for something else--after all, nobody in their right mind would throw three head kicks in a row!

Well, a man who genuinely laughs when an opponent takes his back on the ground is not a man in his right mind. Lawler knew two things: his kicks were hard enough to dissuade Ellenberger from trying to counter, and his opponent was suspicious enough of his intentions to bite on the first feint he saw. Thus, Lawler throws out the left hand, exaggerating the natural wind-up of his kick as he skips his feet into position, and getting Ellenberger to slip what he thinks is a straight left, maximizing the force of Lawler's real attack as he leans right into Ruthless' shin.

This same set-up allowed Lawler to end the fight in round three. 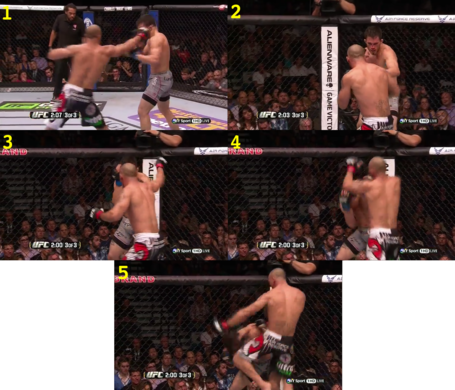 1. Lawler sticks Ellenberger in the eye with a powerful jab.

2. Ellenberger backs, blinking, into the fence as Lawler keeps the pressure on him with some feints.

3. Lawler flings out his right arm, feinting the jab and putting his hand in position...

4. ...to grab Ellenberger's shoulder for control. At the same time, Lawler reaches forward with his left hand, causing Ellenberger to slip right just as before.

As usual, Ellenberger operated under the false assumption that the jab becomes useless against a southpaw opponent, ceding the pressure and distance management aspects of the fight completely to Lawler. Wary only of the big left hand, Ellenberger is so unprepared for Lawler's jab that it hits him square in the eye.  After an apparent hand injury, and the realization that Lawler doesn't respect his power anyway, this is all that's needed to completely break Ellenberger's spirit, and he backs, dejected and completely on the defensive, into the fence.

Robbie adapts the first punch of the combination this time to loop around Ellenberger's head and help guide him into the knee. Still, however, he makes sure to stick his left hand in Ellenberger's face, convincing him that he should slip a straight left only to meet his head on the way down with a vicious knee. Unlike the kick before, Ellenberger has virtually no chance to stop the knee simply by keeping his arms in a defensive shell. The point of Lawler's knee smashes through Ellenberger's guard and collides with the same eye that had been damaged by the jab moments before.

Word of advice to future opponent's of Robbie Lawler: it's not a good idea to shell up and let him do what he wants. Then again, it's not exactly a great idea to hit him back, either. Anybody else ready for that Hendricks-Lawler rematch?

Drew Dober has had a very tough start to his UFC career, dropping consecutive decisions to Sean Spencer and Nick Hein. What's worse is the fact that both fights likely only went to decision thanks to Dober's incredible toughness. In other words, Dober's UFC career so far has been one long beating. That's a shame, because he makes intelligent choices as far as punch selection and strategy, but there is one aspect of his game that's keeping him from outstriking his opponents almost every time he steps into the pocket. 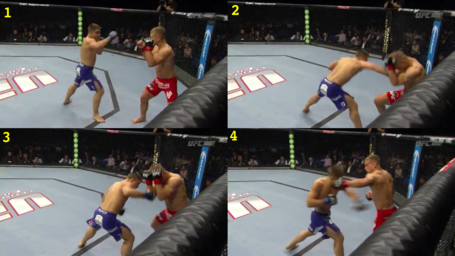 2. ...followed by an actual jab to the body. Hein covers up.

3. Dober follows up with another two punches, leaving his head forward.

4. Hein steps to his right and unloads a wide left hand that catches Dober over the right eye, opening a nasty cut.

This was the story of the fight right here. Dober would back Hein up into the fence, stick him with one or two good punches, and get hit with at least one twice-as-powerful punch in return. He simply could not keep from getting hit, even when he was effectively countering between Hein's shots.

The reason is that Dober was unable to pull his weight back after the first punch of his combination. Every time that he threw his weight, and consequently his head, would come forward. Now having the head move forward on a punch isn't ideal, but it's far from the worst mistake one could make in a fight. The really risky part comes when Dober follows up with his right hand in frame 3, and doesn't pull his weight back with the punch. His head comes forward, and stays there, meaning that anyone gutsy enough to grit his teeth and swing, e.g. Nick Hein, will very easily find Dober's head.

Here's an excellent example of a fighter pulling his head back as part of a combination.

Collazo falls forward overmuch on his straight left, and almost eats a wide left from Ortiz as a result, but he is able to create space by pulling back onto his rear foot, evading his opponent's follow-up punch and landing a beautiful one of his own.

For Dober, if he remains in the UFC after two consecutive losses, he will continue to struggle against craftier or harder hitting fighters until his trainers teach him to control his body weight and create space in the pocket.

That does it for today. Check BE tomorrow for part 2 of this Technique Recap, and keep your eye out for some exciting projects that I've got coming out soon, or whenever the UFC lets us have a rest.

For more analysis like this as well as interviews with trainers and fighters of every sort, check out Heavy Hands, the only podcast dedicated to the finer points of face punching. This week's episode features BE's Pat Wyman, who has scouted opponent's for fighters such as Fabricio Werdum and Rafael Dos Anjos. Seriously, it's coming out this week. I SWEAR.